“I DON’T WANT THIS TO HAPPEN” 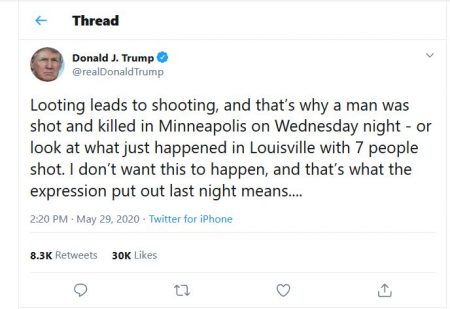 (May 29, 2020) — At 2:20 PM EDT, President Donald Trump issued a clarification to an early-morning tweet which Twitter identified as being in violation of its policy against “glorifying violence.”

The tweet was not entirely removed, but rather, obscured, providing the user the choice to open and read it or simply see Twitter’s warning.  In it, Trump wrote:

….These THUGS are dishonoring the memory of George Floyd, and I won’t let that happen. Just spoke to Governor Tim Walz and told him that the Military is with him all the way. Any difficulty and we will assume control but, when the looting starts, the shooting starts. Thank you!

Trump was referring to the violence in Minneapolis following the death of 46-year-old George Floyd after a police officer held his knee for 8 minutes and 46 seconds on the back of Floyd’s neck as he lay face down, handcuffed.  Floyd was black and the officer, Derek Chauvin, white.

Chauvin and three other officers present at the scene were fired.  Approximately two hours prior to press time, Chauvin was reportedly taken into custody and charged with third-degree murder and second-degree manslaughter.

Floyd’s death set off protests which spiraled into looting, setting fires to Ward 3 businesses, housing, and a police precinct and extending to the “Twin City” of St. Paul.

On Wednesday, CBS Minnesota reported, “Starting at about 6 p.m., police began firing chemical irritant and firing rubber bullets at the precinct, located near the intersection of Lake Street and Hiawatha Avenue, as video on social media shows some protesters once again began breaking the precinct’s windows.”

As of Thursday, one person was killed during the rioting.  On Friday, CBS Minnesota reported that Minneapolis Mayor Jacob Frey asked Gov. Tim Walz to activate the state National Guard to assist.

Twitter’s flagging of Trump’s tweet came the day after Trump signed an executive order with the intent of curbing what he says is “censorship” on the part of social-media platforms against “conservatives.”

The order directs the U.S. Justice Department to conduct a review of Section 230 of the 1996 Communications Decency Act as it relates to online content providers’ exemption from legal liability for information users might post and whether or not the providers are censoring speech based on “viewpoint.”

Looting leads to shooting, and that’s why a man was shot and killed in Minneapolis on Wednesday night – or look at what just happened in Louisville with 7 people shot. I don’t want this to happen, and that’s what the expression put out last night means……..It was spoken as a fact, not as a statement. It’s very simple, nobody should have any problem with this other than the haters, and those looking to cause trouble on social media. Honor the memory of George Floyd!

Trump’s reference to “Louisville” is to violence which erupted at a protest Thursday night over the death in March of a 26-year-old black EMS technician, Breonna Taylor, “as part of a narcotics investigation.”

A bit earlier on Friday, Trump wrote, “REVOKE 230!” and an hour before that, he reported the National Guard’s presence in Minneapolis.  “George Floyd will not have died in vain.  Respect his memory!!!” Trump added.