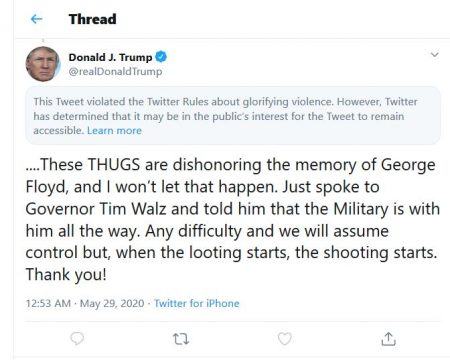 (May 29, 2020) — At 7:10 a.m. Friday, President Trump again expressed displeasure with the Twitter social-media platform after it flagged a tweet in which Trump said he would send the National Guard to Minneapolis unless order can be restored quickly.

Fires, looting, and explosions overtook the city after 46-year-old George Floyd, a black man, lost his life while in police custody after a white police officer held his knee on Floyd’s neck for between six and eight minutes following a Monday night arrest.  On Thursday night, rioters set fire to an abandoned police station

“….These THUGS are dishonoring the memory of George Floyd, and I won’t let that happen,” Trump tweeted early Friday morning. “Just spoke to Governor Tim Walz and told him that the Military is with him all the way. Any difficulty and we will assume control but, when the looting starts, the shooting starts. Thank you!”

While Twitter did not completely remove the tweet, it added the statement, “This Tweet violated the Twitter Rules about glorifying violence. However, Twitter has determined that it may be in the public’s interest for the Tweet to remain accessible. Learn more” and a “View” button if the reader wishes to read it.

The clash renewed Trump’s call for social-media companies to maintain neutrality or risk losing the protections afforded them by Section 230 of the 1996 Communications Decency Act in a lengthy executive order signed Thursday evening aimed at “preventing online censorship.” 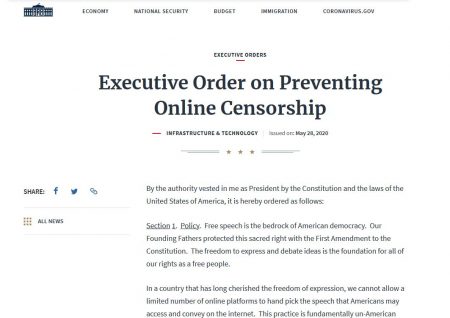 The obscured tweet was the second part of Trump’s reaction to the destruction taking place in Minneapolis, which began with: 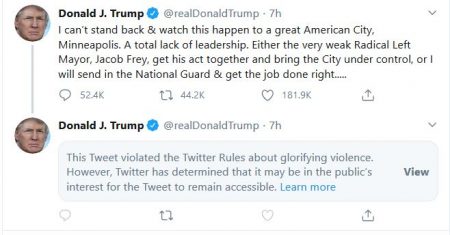 Trump’s most recent tweet as of this writing, time-stamped 7:10 AM EDT, states, “Twitter is doing nothing about all of the lies & propaganda being put out by China or the Radical Left Democrat Party. They have targeted Republicans, Conservatives & the President of the United States. Section 230 should be revoked by Congress. Until then, it will be regulated!”

Trump Suggests Twitter “Will be Regulated” added on Friday, May 29, 2020

One Response to "Trump Suggests Twitter “Will be Regulated”"