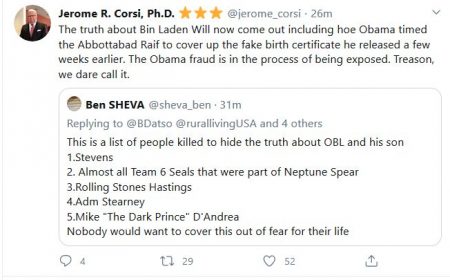 (May 17, 2020) — At approximately 2:00 PM EDT on Sunday, author and podcaster Dr. Jerome Corsi responded to a comment in his Twitter feed alleging “a list of people killed to hide the truth about OBL and his son,” referring to the Al Qaeda terrorist Osama bin Laden.

In response, Corsi tweeted, “The truth about Bin Laden Will now come out including hoe Obama timed the Abbottabad Raif to cover up the fake birth certificate he released a few weeks earlier. The Obama fraud is in the process of being exposed. Treason, we dare call it.“

In an interview approximately 45 minutes later with this writer, Corsi clarified that the “long-form” birth certificate image was released by the Obama White House on April 27, 2011 and the alleged raid on bin Laden’s hideout in Pakistan occurred on May 2.

Corsi is author of “Where’s the Birth Certificate? The Case that Barack Obama is not Eligible to be President” published in May 2011, among numerous other titles.

He also told us, “The birth certificate issue’s back on the table, so let’s pound it a little bit.”  When we asked his reason for saying that, Corsi responded:

Enough is coming out about Obama now where a wider group of the American people are seeing the fraud, and I think these recent revelations about the unmasking and Gen. Flynn and then the stunt that Obama played when he tried this dog whistle, giving a little speech that got to Judge Sullivan that it would be a good idea to have some court hearings with Obama wanting to get Flynn for perjury, and that was taped, and the law enforcement authorities, I’m sure, taped it too, so Obama punked himself. Now that they’re seeing this, that he is still deeply invested in the Gen. Flynn case, I think the American people are saying, “A lot of the things said about Obama are true.”  I believe that the fraud is up and the American people are beginning to see through a lot of things they had not perceived before.

Donald Trump survived impeachment; the Democrats were so desperate to get him out of office that they ran hoax after hoax. Now I think it’s clear that Obama was involved in a coup d’etat.  The central theme of my book, “Coup d’État,” is that Obama directed the coup d’etat against Trump and he and Hillary Clinton were Traitor #1 and Traitor #2.  Additionally, when people realize that, they also begin to realize that the birth certificate was a fraud.

Now that I have a source, Boris, who created “The Boris Files,” — I’ve done a lot of reporting on him; we’re doing the videos — he says that bin Laden was not killed in the Abbottabad raid, but he was captured.  According to Boris, he was brought to Benghazi and tortured.  I can’t verify whether that’s true or not, but the claim has some merit to me because of the very suspicious circumstances under which bin Laden was supposedly buried at sea and how few people were witnesses to it.

I’ve been suspicious of the helicopter incident that killed the SEAL team, and so many of these incidents do not fit together, and that’s why I question the Obama narrative on Osama bin Laden being killed. They say they have DNA, but you can get DNA from a living person.

The timing of it — just a few days after the release of the birth certificate — is too convenient, because I was charging almost immediately that the birth certificate that was released was very suspicious and a fraud.  First of all, it was an electronic document. They’ didn’t have electronic documents in 1961.  The whole composition of the document looked as if it had been faked, and that was ultimately proved by Sheriff Arpaio and Mike Zullo.

My view, even at the time, was that Obama was doing his version of “wagging the dog,” that the Abbottabad raid would close the issue on the birth certificate because Obama did not want the accusations of fraud that were developing seriously investigated.  So they brought out this document; the mainstream media all applauded and declared the issue was over; they wanted to end it whether or not the fraud was continuing.  And the raid was, I believe, in part designed to do that.

“Do you have a source who told you that that happened?” The Post & Email asked.

No, that’s my own conclusion on this simply from observing it and understanding politics, studying for years how Obama worked.  The Obama administration was much more about manipulation of a compliant press than anything to do with substance.

They failed with Russiagate, then they failed with UkraineGate; now they’re trying VirusGate. It’s the same thing all over again. I’m writing at Corsination.com that I’m concerned that this could be a bio-attack and COVID-20 could be around the corner.  These manipulations of the mainstream media by this Deep-State crowd which Obama exemplifies have not gotten over the fact that they didn’t get to complete their fundamental transformation of America into a socialist, New-World-Order state with Hillary Clinton’s coronation.

“Have you spoken with any Washington insiders who have indicated that they are now making a connection between the birth certificate and the information coming out through transcripts and other things?”

Not that I can see, but certainly, it’s an active subject and discussion on Twitter.  There’s a large segment of the American population thinking about it. I don’t think you’re going to see it in the mainstream media except to again ridicule those of us who are thinking about it as “conspiracy theorists.”  When you see people like me being called “conspiracy theorists,” just think “CIA disinformation”; that’s all it is. The lie is their cover story which they have fabricated in order to distract you from the understanding of what really happened.

Regarding Obama’s background, Corsi told us:

Nothing about Obama’s life story, starting with his nativity mythology, has ever been able to be fully documented.  That should be a clear sign of an intelligence-agency-created legend, and no one has yet been able to dissuade me from the belief that Obama’s life is an intelligence-agency disinformation campaign after the fact; that he was a hardcore socialist or communist who came up through Saul Alinsky organizations and has supported all of his life communists or socialists; and that he was raised, at least culturally, in Islam, which he attempted to deny. In 2008 I wrote Obama Nation with nothing but a further elaboration of the intelligence-agency legend that had been created to explain his life in a way to mask the truth.  The information that is available is contradictory, and all of this is the clear signs of a disinformation campaign.

Sorting through to the truth may be difficult, especially after years, but what you can conclude is that Obama is not who he says he is, or the creation of this disinformation story would not have been possible.  His life would be documentable; it would be able to be verified.  It wouldn’t have all of these missing documents, holes, and contradictory stories…it goes on and on and on.  In future generations, when the full exposure of this Deep-State corruption becomes known more completely — and I predicted that Mueller would fail; Mueller failed — and I predicted there would be a Trump counter-attack that’s just really now getting going, with Grenell the major engine of it; not Barr, Grenell — and I predict that by Election Day, the American people will understand that it was a treasonous coup d’etat, and traitors number 1 and 2 were Obama and Hillary.  I don’t really know which one was #1 and #2, but it doesn’t really matter.

Corsi likened the bin Laden raid to the assassination of President John F. Kennedy, about which he wrote in “Who Really Killed Kennedy?: 50 Years Later: Stunning New Revelations About the JFK Assassination.”

Regarding who might have created the Obama birth-certificate forgery, Corsi opined, “Finding out those identities, while it’s intriguing to establish responsibility, they are also part of this disinformation campaign to get you to go down these rabbit holes where you’re discredited.  The real story is that it doesn’t fit together.  The real story is if there was a birth certificate, why did the Hawaii Department of Health, where Mike Zullo showed up with law enforcement from Arizona, refuse to show him documentation?  That’s the story.”

“Mike Zullo said, ‘There never was a birth certificate for Obama,'” The Post & Email commented, to which Corsi replied, “That’s the logical conclusion.”

38 Responses to "Dr. Corsi: Obama Birth Certificate “Back on the Table”"