WILL THE “OPEN SECRET” FIND A WIDER AUDIENCE? 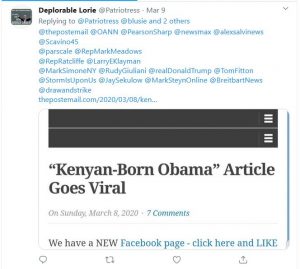 As The Post & Email has reported, its September 17, 2019 article referencing one at the Kenya Sunday Standard identifying Obama as “Kenyan-born” in 2004 has inexplicably become one of our most-read articles beginning with a spike in readership on Saturday morning.

Since 2007, questions have swirled around credible reports stating that “Barack Hussein Obama II” was born in Kenya or Indonesia and not Hawaii, as he claims.  Prior to the 2008 presidential election, outlets such as NPR, the former Honolulu Advertiser, and MSNBC reported Obama as having been born in either of the two aforementioned foreign countries.

In March 2007, as Hillary Clinton vied for the Democratic nomination, her chief strategist, Mark Penn, privately argued that the campaign should make the case of Obama’s “lack of American roots.”

The strategy memo, published by the left-leaning Atlantic in August 2008 after Clinton’s primary loss to Obama, elaborated on Penn’s claim with, “All of these articles about his boyhood in Indonesia and his life in Hawaii are geared towards showing his background is diverse, multicultural and putting that in a new light…It also exposes a very strong weakness for him — his roots to basic American values and culture are at best limited.  I cannot imagine America electing a president during a time of war who is not at his center fundamentally American in his thinking and in his values…”

Ironically, it was Breitbart which in 2012 discovered a promotional pamphlet produced in 1991 by Obama’s first literary agent reporting him as “born in Kenya and raised in Indonesia and Hawaii.”  Breitbart prefaced the release with a “Note from Senior Management” which stated:

Andrew Breitbart was never a “Birther,” and Breitbart News is a site that has never advocated the narrative of “Birtherism.” In fact, Andrew believed, as we do, that President Barack Obama was born in Honolulu, Hawaii, on August 4, 1961.

Yet Andrew also believed that the complicit mainstream media had refused to examine President Obama’s ideological past, or the carefully crafted persona he and his advisers had constructed for him.

It is for that reason that we launched “The Vetting,” an ongoing series in which we explore the ideological background of President Obama (and other presidential candidates)–not to re-litigate 2008, but because ideas and actions have consequences.

It is also in that spirit that we discovered, and now present, the booklet described below–one that includes a marketing pitch for a forthcoming book by a then-young, otherwise unknown former president of the Harvard Law Review.

It is evidence–not of the President’s foreign origin, but that Barack Obama’s public persona has perhaps been presented differently at different times.

On April 27, 2011, the White House released what it said was a PDF representation of Obama’s “long-form” birth certificate obtained from the Hawaii Department of Health days before.  The image was quickly denounced as a poorly-crafted forgery by several experts, leading to the launching by then-Maricopa County Sheriff Joseph Arpaio of a criminal investigation into the authenticity of the “document.”

It was Donald Trump, then a billionaire businessman and host of the NBC show, “The Apprentice,” who in early 2011 began calling upon the White House to release Obama’s original birth record to prove his eligibility as a “natural born Citizen,” as the Constitution requires for the president and commander-in-chief.

Arpaio delegated the task to his “Cold Case Posse,” a volunteer group of retired law-enforcement officers, attorneys and other professionals serving as an adjunct to the sheriff’s office.  Its leader, Mike Zullo, a former detective and private investigator, informed Arpaio shortly after commencing the project that the image could not be considered genuine, prompting additional investigation which lasted more than five more years.

As Zullo revealed at a third and final press conference on the probe in late 2016, two forensic document examiners, each working from a different discipline, supported his findings that the birth-certificate image is a “computer-generated forgery.”

The mainstream media largely ignored the striking ramifications emanating from the presser, as it did the two preceding press conferences on March 1, 2012 and July 17, 2012.  Instead, outlets such as the Associated Press stressed that Arpaio’s investigation into Obama’s birth certificate was “closed” as Arpaio prepared to leave office after serving six terms but losing the 2016 election to Democrat Paul Penzone.

Further to protecting Obama, the media labeled anyone questioning his birthplace, life narrative or eligibility “birthers,” a term which has persisted to this day.

In August 2018, Zullo revealed that two U.S. intelligence agents entrusted him with the information that Obama was not born in the United States and therefore could not meet the Constitution’s “natural born Citizen” requirement for the president and commander-in-chief.  The two reportedly described that knowledge as “an open secret” in the nation’s capital.

Arpaio is seeking to retake the position in November as Trump campaigns for a second term in the White House.

Some have speculated that if Trump wins re-election, he will take action on the Obama birth certificate given that he himself declared it a forgery a month after it was released.