IN A SECOND TERM, WOULD TRUMP INVESTIGATE OBAMA’S “DOCUMENTS?” 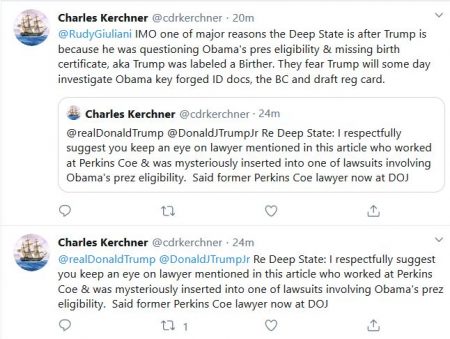 “One of [the] major reasons the Deep State is after Trump is because he was questioning Obama’s pres[idential] eligibility & missing birth certificate,” Kerchner tweeted to Giuliani, who has been researching what he alleges is massive corruption involving the Obama regime, Ukraine, China and possibly other countries.

“Trump was labeled a Birther,” Kerchner noted in his tweet.  “They fear Trump will some day investigate Obama key forged ID docs…”

Over a period of months in early 2011, Trump publicly called for Obama to release his original birth record to prove his constitutional eligibility to serve as president, leading the White House on April 27 that year to post an image said to represent Obama’s “long-form” birth certificate from Hawaii.

During the Obama years, The New York Times and other mainstream outlets as a bloc adopted and applied the term “birther” to anyone questioning Obama’s birthplace or eligibility, including Trump.  Many Americans harbored doubts as to Obama’s eligibility in response to conflicting articles, many from the very same newsrooms, reporting Obama as having been born in Indonesia or Kenya and not Hawaii, as he claims.

Article II, Section 1, clause 5 of the U.S. Constitution requires the president and commander-in-chief to be a “natural born Citizen,” a term the Founders did not define.  Many Americans understand it to mean “born in the United States.”  Others believe that the citizenship of the candidate’s parents is equally important to his or her birthplace.

The term “birther” continues to be invoked to this day by those on the political left. 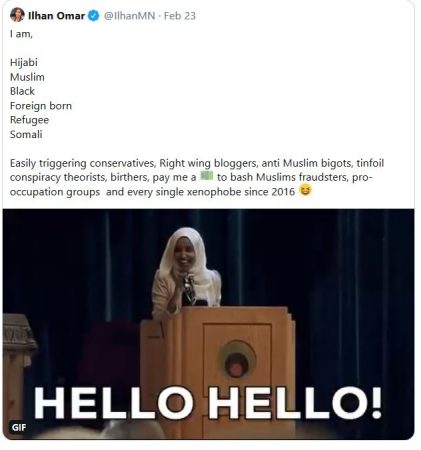 A 5+-year criminal investigation which ensued after the release of the long-form image determined beyond the standard of probable cause that the image is a “computer-generated forgery” and Obama’s purported Selective Service registration form a “hard-copy forgery.”

During the 2016 presidential election cycle, advisors to the Trump campaign were confronted, unknowingly, by operatives seeking information while secretly recording their conversations, actions confirmed by a lengthy report released by the U.S. Justice Department’s Office of Inspector General (OIG) in December. In separate reports, Inspector General Michael Horowitz examined the decisions made and not made within the FBI and Justice Department in 2016, when the FBI’s “Crossfire Hurricane” probe of the Trump campaign was reportedly launched.  Horowitz’s investigations generated a number of criminal and administrative referrals against certain Special Agents and high-ranking FBI officials.

An unknown number of individuals within the federal-government bureaucracy, referred to by many as the “Deep State,” appears to have worked to thwart the former business mogul’s presidency and effect his removal from office, an effort which proved unsuccessful on February 5 when Trump was acquitted of two Articles of Impeachment brought by the U.S. House of Representatives.

Regular readers of this publication have expressed similar sentiments to Kerchner’s concerning the “Deep State” and its purported fear of investigations Trump might undertake in a second term.

Prior to reaching out to Giuliani, Kerchner tweeted messages to Trump and his son, Donald J. Trump, Jr., referring to The Post & Email’s article published Tuesday evening reporting that a one-time law clerk to a federal judge who unexpectedly dismissed an Obama “eligibility” lawsuit in 2009 is now an Assistant U.S. Attorney for the Western District of Washington. It was after Judge David O. Carter’s hiring of the young attorney that Carter abandoned his previous expressed intent to allow the plaintiffs to discover whether or not Obama was constitutionally eligible to serve.

The law clerk, Siddharth Velamoor, had been hired from the law firm Perkins Coie, which has long represented the Democrat National Committee (DNC) and defended Obama against numerous civil suits challenging his eligibility during his first term.

Perkins was also involved in conveying unsubstantiated claims to the FBI that a Trump Tower computer was communicating with one at the Russian Alfa Bank in apparent furtherance of the narrative that the Trump campaign was coordinating its efforts to win the election with Russian operatives.

A 22-month Special Counsel investigation, which some believe was the “insurance policy” invoked by former FBI Special Agent Peter Strzok and former FBI attorney Lisa Page in text messages, determined that neither the Trump campaign nor any American conspired with Russia to alter the results of the election.

Perkins Coie co-founder Robert Bauer, who served as Obama’s first White House counsel, defended the “long-form” birth certificate image as authentic while ensuring that Obama did not display the “document” when he gave a press conference later that morning.

Six weeks after the image was posted, Bauer resigned as White House counsel and returned to Perkins Coie.  Last March, he wrote an editorial published at The Atlantic claiming that Trump’s questioning of Obama’s eligibility amounted to “birtherism” and “racism.”

The former detective who conducted the investigation into the long-form image and Selective Service form, Mike Zullo, reported 18 months ago that two U.S. intelligence agents informed him that it is “an open secret” in Washington, DC that Obama was not born in the United States.  Additionally, last spring Zullo said that the investigation discovered “collusion” between the Obama regime and media executives to quash any reportage of the birth-certificate issue.

Is This What the Deep State Truly Fears? added on Wednesday, February 26, 2020

32 Responses to "Is This What the Deep State Truly Fears?"