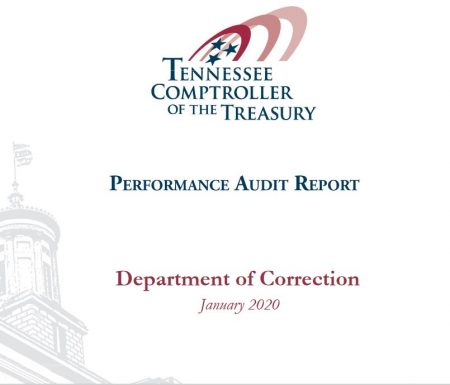 (Jan. 11, 2020) — A 234-page “Performance Audit Report” released Friday by the Tennessee Comptroller of the Treasury found the Tennessee Department of Corrections (TDOC) to be deficient in carrying out the department’s mission “to operate safe and secure prisons and provide effective community supervision in order to enhance public safety.”

The audit discovered missing information in inmates’ medical files, specifically pertaining to “serious accidents, injuries, and illnesses” (p. 12 of PDF) and that allegations of “sexual abuse and sexual harassment” were not investigated according to stated “policies and procedures” (p. 13).

Inmate deaths were also inaccurately recorded as to the cause, auditors found, as well as 21 instances of “missing inmate death certificates” (p. 88).

Facilities operated by the State of Tennessee, of which there are ten, and four managed by private prison contractor CoreCivic were scrutinized between October 1, 2017, through July 31, 2019, the report states in a January 6, 2020 cover letter signed by “Deborah V. Loveless, CPA, Director Division of State Audit.”

For “Inmate Medical and Mental Health Services,” auditors found that “Department management disregarded controls over statewide procurement and established its own informal procurement and payment system without proper review and approval by oversight authorities” (p. 13 of PDF).

On that point, the report continues:

Furthermore, despite management’s stated corrective action in the November 2017 performance audit report, we still found that CoreCivic facilities’ monthly staffing reports contained the same errors noted in the prior audit, which means that department management still cannot effectively track whether CoreCivic is meeting its required staffing levels. The details are in Finding 14.

Since 2016, dozens of inmates have written to The Post & Email describing staff shortages resulting in dangerous conditions, particularly at the Trousdale Turner Correctional Center (TTCC), which is frequently mentioned in the report.

In 2003, the Prison Rape Elimination Act (PREA) was passed unanimously by Congress.  According to the audit, “It applies to all public and private correctional facilities that house adult or juvenile inmates as well as community-based agencies. It mandates certain standards concerning detection and prevention of prison rape. The Tennessee Department of Correction must follow federal PREA standards issued by the United States Department of Justice” (p. 175 of PDF/153 of report).

As for allegations of sexual abuse and harassment, the “audit objective” of “Did the department and CoreCivic investigate and document PREA allegations in accordance with department policy and national PREA standards?” was answered with:

Based on our audit work, we found that both department and CoreCivic correctional facilities staff did not log PREA allegations timely, and staff at two state facilities, Turney Center Industrial Complex and Northeast Correctional Complex, did not maintain proper investigation documentation. See Finding 9.

In May 2018, NWCX inmate Jerome L. Johnson reported an alleged PREA violation on his person by a staff member which he said not only went unaddressed, but also the offending officer was only temporarily relocated, then returned to Johnson’s unit after “11 days.”

Auditors’ findings from the records of 294 inmates divided between CoreCivic and state-run facilities demonstrated a lack of required medical documentation (p. 122):

As for the dispensing of medications, the report states, “Based on our observations of nurses administering medications at multiple correctional facilities, we identified concerns regarding the administration of medication and recording the delivery of medications to inmates at two CoreCivic facilities. See Observation 4” (p. 116 of PDF).

Over the last 3+ years, inmates at both TTCC and in state-run prisons have reported inconsistent administration of their medications and, in one case, a reduction in medication doses which he believed was made “to save money.”

Dangerously-low staffing levels were reported by inmates at TTCC and their relatives not long after it opened in January 2016.  In June of that year, an inmate reported in a handwritten letter that diabetics were rushed to the hospital “because they didn’t get their insulin.”

Reports dating back to 2016 from current MCCX inmate Grenda Ray Harmer which included instances of sexual harassment, including against female corrections officers; the unexplained withholding of his prescription medications for periods of time; his assignment to nonexistent jobs and staff’s unresponsiveness to grievances were labeled “fictitious” by former TDOC Communications Director Neysa Taylor in 2017.

After Friday’s report was published, TDOC Commissioner Tony Parker and CoreCivic released respective statements as reported by WKRN and Channel 5.

Although the Department concurs, or concurs in part, with all of the findings referenced in the Comptroller’s report, we maintain that the TDOC operates safe and secure prisons and provides effective community supervision. The majority of the findings can be attributed to technology challenges, delayed reporting, and the staff shortages that our state, like many others, currently experience. It is important to note that the department is certified by the Department of Justice for PREA compliance, fully accredited by the American Correctional Association, and many of our processes and protocols exceed national standards. Nevertheless, the department recognizes and is committed to improving our processes and procedures as well as enhancing our own internal auditing processes as recommended by the Comptroller that will help the TDOC be a better and more efficient department.

For more than 30 years, CoreCivic has been committed to providing a high standard of care for every person in our Tennessee facilities, including quality reentry programming, comprehensive healthcare, faith-based support and many other services. We will continue to work closely with our partners at the Tennessee Department of Correction to ensure our administrative processes are fully compliant and provide total transparency into our operations.

As for staffing shortages at TTCC, CoreCivic wrote, in part:

As we’ve acknowledged previously, there were challenges with bringing the Trousdale Turner Correctional Center up to full speed after its opening. We’ve worked hard to address the challenges we’ve faced, and while we still have work to do, we are making progress.

WSMV, which has produced a considerable number of in-depth reports on the TDOC since 2014, reported of the audit on Friday:

The audit found inmates not getting proper medical or mental health treatment.

Staffing was at minimal levels, both at prisons run by the private contractor, CoreCivic, and the state.

There’s a lack of monitoring for probationers and parolees.