ABSENCE OF MEDICATION REPORTEDLY CAUSED “CONVULSIONS, PASSING OUT” ONCE BEFORE

Since late July, Harmer has been in “segregation,” or solitary confinement, at the Morgan County Correctional Complex (MCCX), where he has reported numerous policy violations and an assault by a gang member.

The information he was given by Corporal D. Cooper on the afternoon of December 4 is documented on an “Inmate Inquiry – Information Request” form sent to Dr. Edmund Lane, MCCX Warden Shawn Phillips, David Tulis of “Nooganomics” and this writer.

The withholding of the medication comes on the heels of Harmer’s last report stating that he was moved to a cell where cold air is being blown in, necessitating that he wear a hat, gloves, several layers of clothing, and his coat in an attempt to maintain body heat.

The Post & Email has no reason to doubt the veracity of Harmer’s claim, and any temperature below 65° violates established TDOC policy.

Of the medication withheld, Harmer wrote, “I’ve got a documented history that I need it.  The last attack I had at TCIX caused me to convulse, pass out, and wake up the next day with an IV stuck in my arm.” 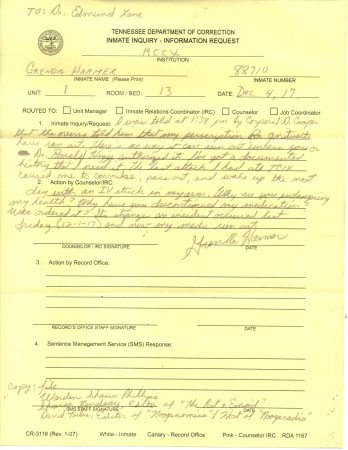 Early this year, Harmer reported that while he was housed at the CoreCivic-run Trousdale Turner Correctional Center (TTCC), all of his medications were withheld for several weeks, during which he experienced increasingly-severe side effects. After The Post & Email contacted Correct Care Solutions (CCS) spokesman Jim Cheney about the missing prescriptions, Harmer reported in subsequent letters that the medications were gradually reinstated.

The same situation arose after Harmer was moved to the South Central Correctional Facility (SCCF), also operated by CoreCivic, in early April, after which an email to Cheney again was reported to have resolved the problem.

After Harmer was relocated in early June to MCCX, he reported that his medications were withheld briefly but reinstated. However, his personal property was confiscated, although some was restored to him as he proceeded through a month-long hunger strike which caused him to be taken to University of Tennessee Medical Center in early July after he was found passed out in his cell.

While TDOC spokeswoman Neysa Taylor told Tulis in mid-September that Harmer’s letters contain “fictitious” information, neither she nor anyone else from the TDOC has requested a correction, retraction, or apology from The Post & Email in connection with the hundreds of articles it has published about conditions within Tennessee’s prisons.  Rather, after this writer sent a letter to TDOC Commissioner Tony Parker, CoreCivic Executive Vice President Harley Lappin, and Taylor expressing concern about the conditions while offering to retract any inaccurate reports should they offer documentation of same, no response was ever issued.

An attempt to open the link from the MCCX web page titled “Offender Health Care” yielded the following result on Monday morning: 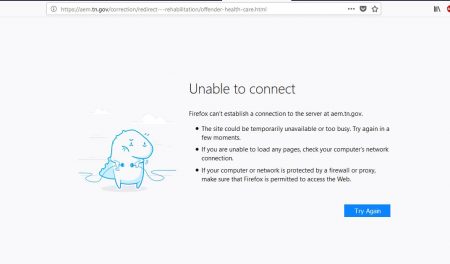 A number of other broken links within the TDOC website were also noted.