“BY LAW HE IS THE ONE THAT HAS TO BE MOVED” 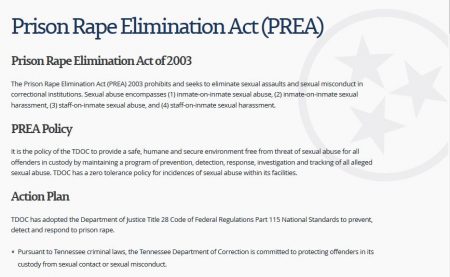 (May 19, 2018) — On April 16, 2018, an article was published from documents received from Tennessee Department of Correction (TDOC) inmate Jerome L. Johnson, #150724, in which he alleged to the prison warden, Shawn Phillips, that he was the victim of a sexual assault by a correction officer on March 28, 2018.

The PREA policy states that “All allegations of sexual abuse will be reported to Internal Investigators for investigation.” Further, it says:

The department is dedicated to producing quality investigations of alleged sexual abuse incidents.

The TDOC Law Enforcement Unit, in consultation with the department’s legal office, aggressively refer substantiated cases of sexual assault by offenders or employees to the local district attorney’s office for criminal prosecution.

In a mailing received Friday, Johnson reported that the correction officer he accused of the PREA violation was removed from his unit “with pay for 11 days” but then returned to his previous position in which he and Johnson inevitably interact.

Included in the same envelope was documentation that five days before the alleged PREA violation, Johnson had filed a grievance against the officer for allegedly having denied the inmates in his unit their customary recreation period that day in an arbitrary way.  In that grievance, Johnson claimed that the officer did so out of “spite, abusing his authority.”

[Editor’s Note: The Post & Email has chosen not to redact from the documentation below a word which we would normally not publish based on the judgment that in this instance, it likely presents a more complete picture of that which Johnson has alleged against the correction officer in regard to the recreation incident and the officer’s oath of service.] 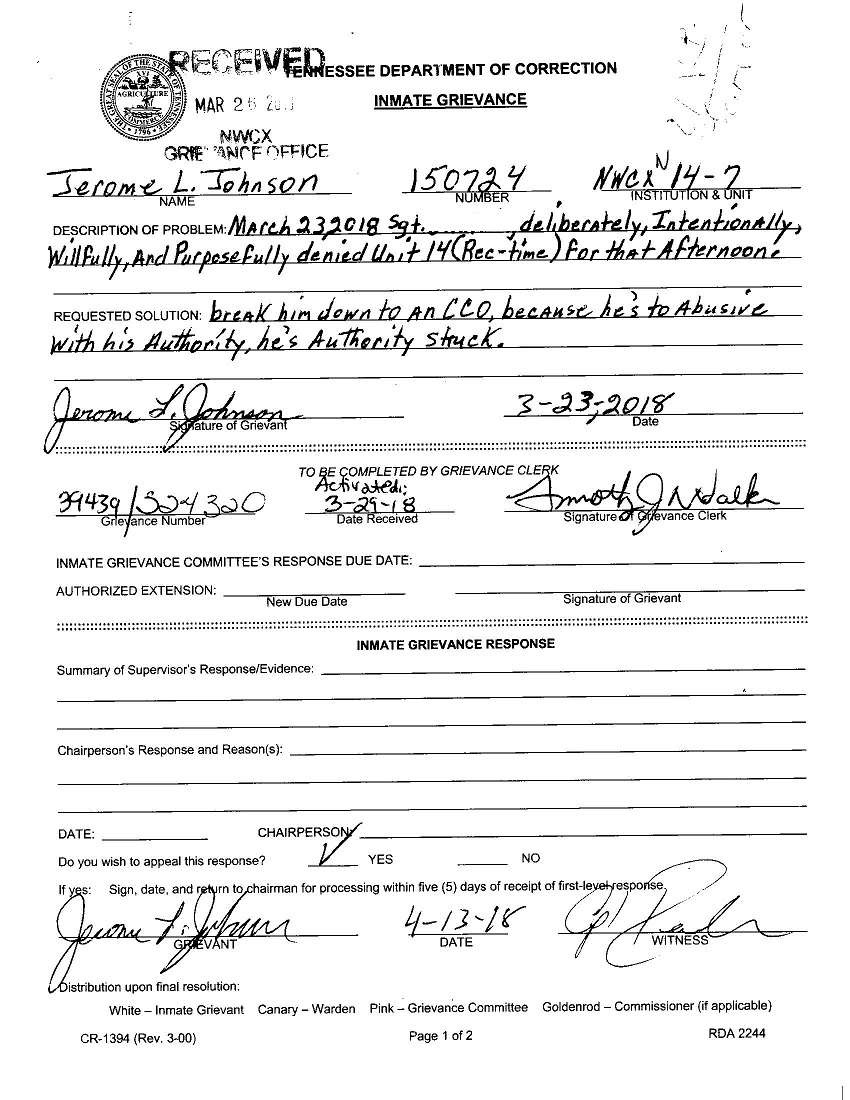 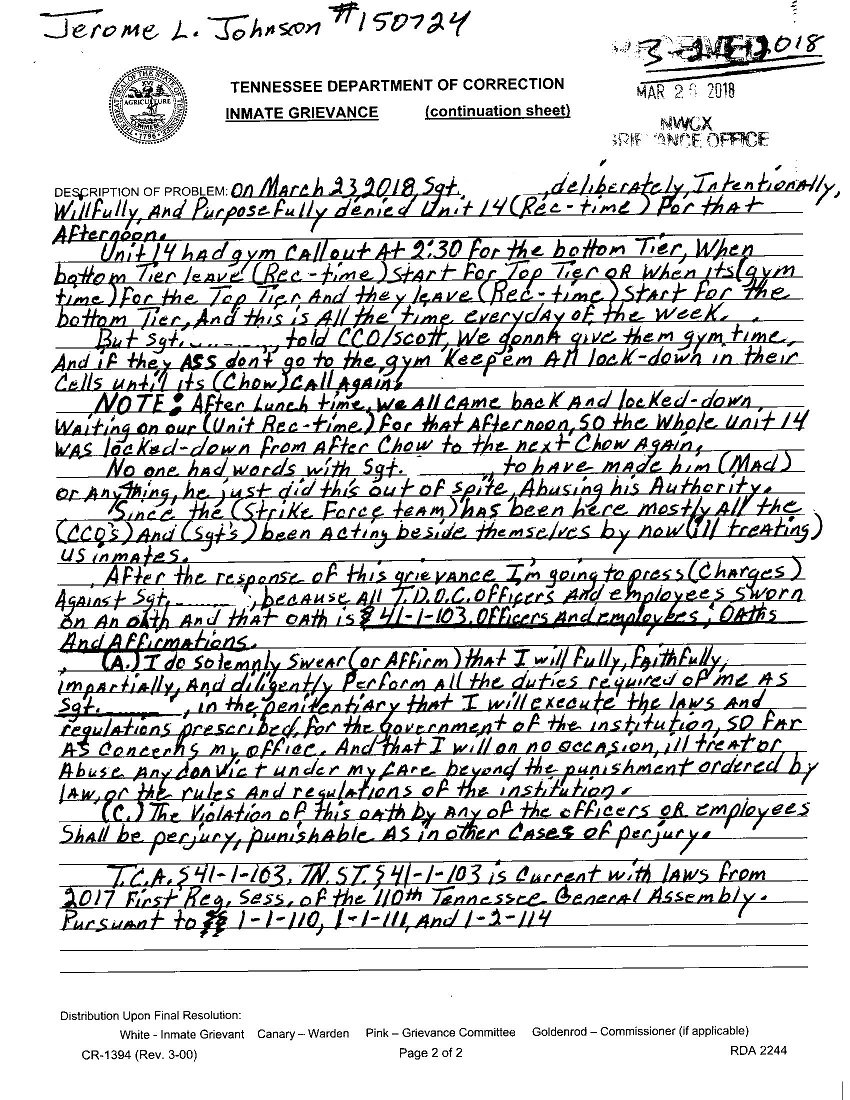 The law to which Johnson referred containing a correction officer’s oath of service is found in Lexis-Nexis and reads: 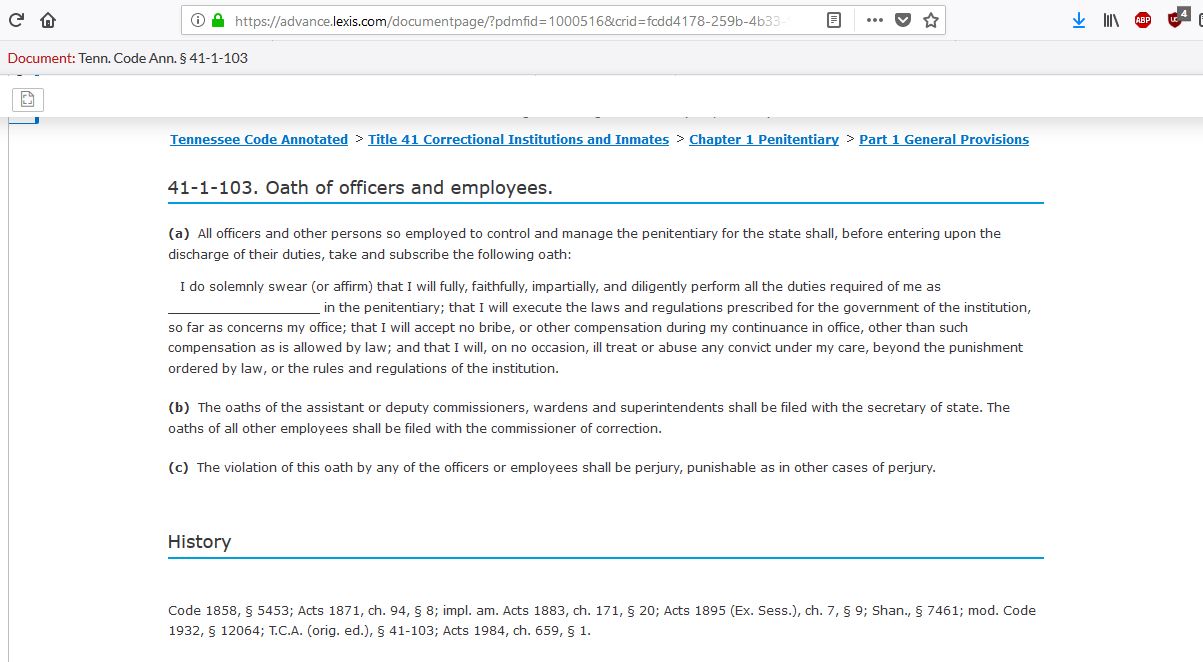 The response from the officer’s supervisor reads, “In review of Jerome Johnson #150724 complaint Unit Manager Jeff Tarver (?) found Sgt. XXXXX was going [sic] what the shift OJC and upper management had told him to do.” 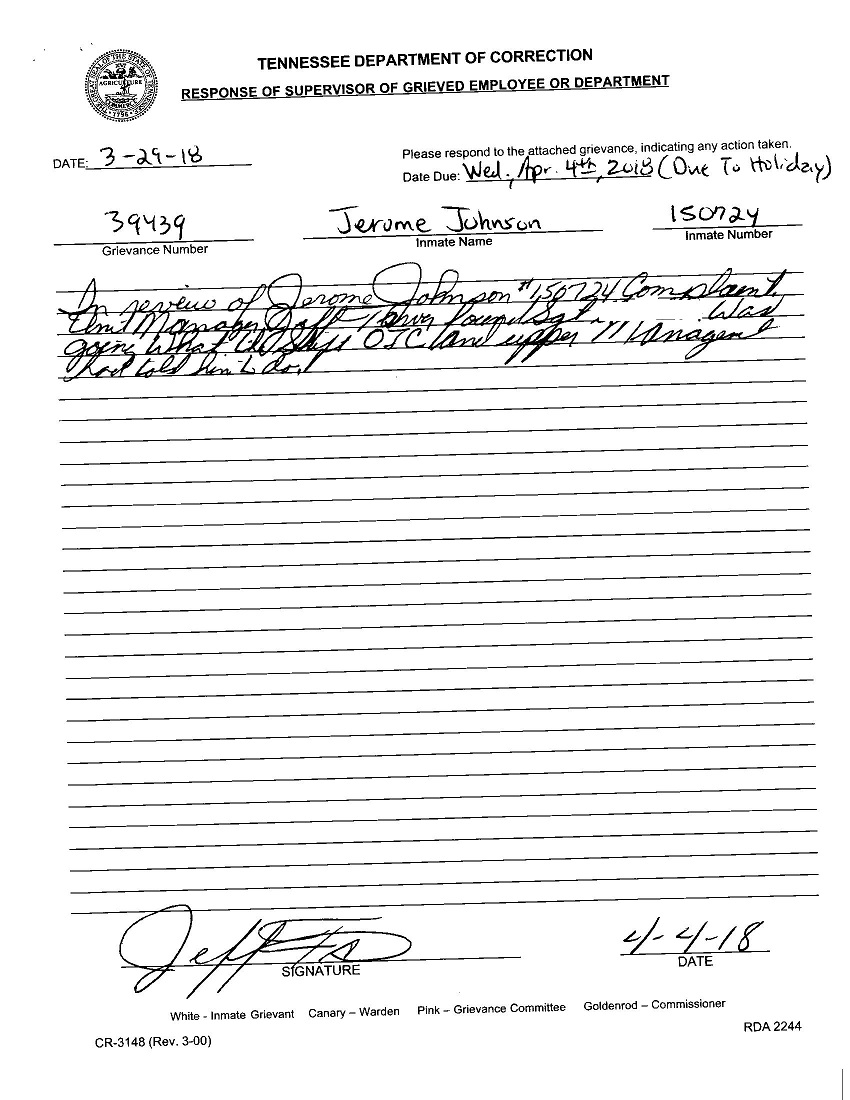 The official response from the Grievance Committee reads, “Committee feel that the schedule should be followed.” 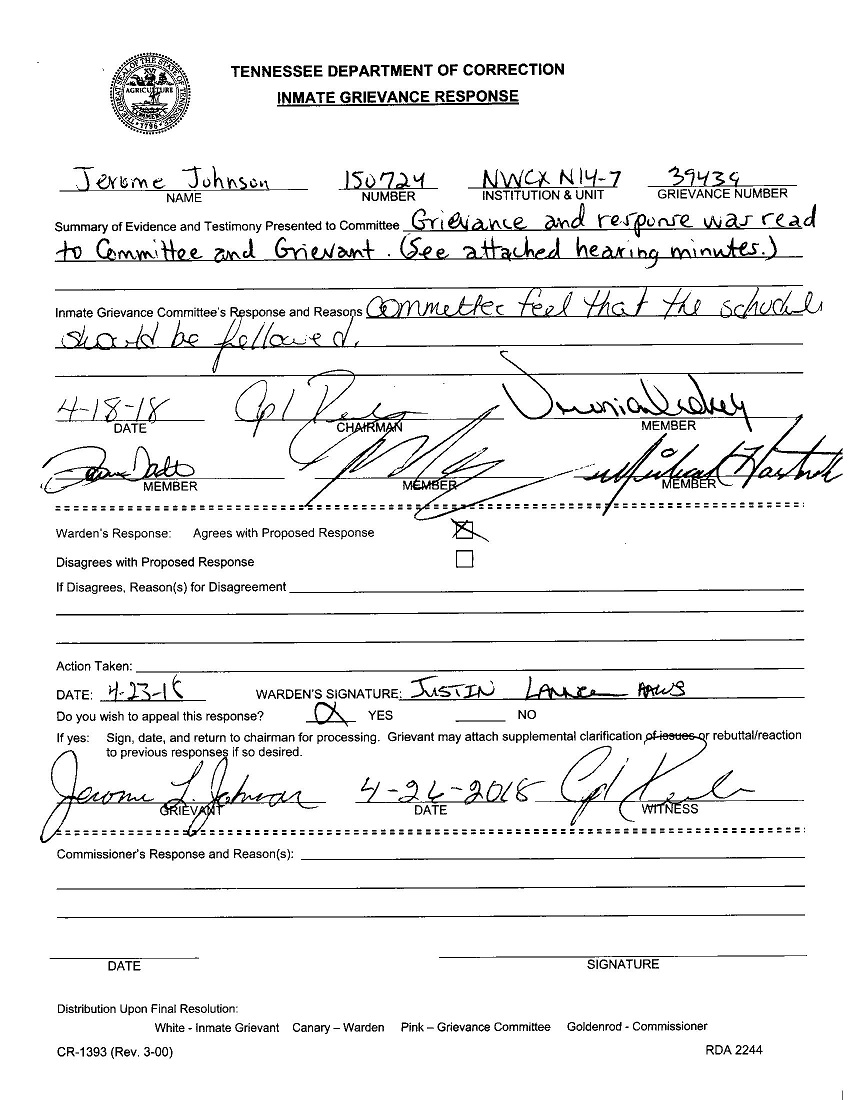 The Hearing Minutes are documented as: 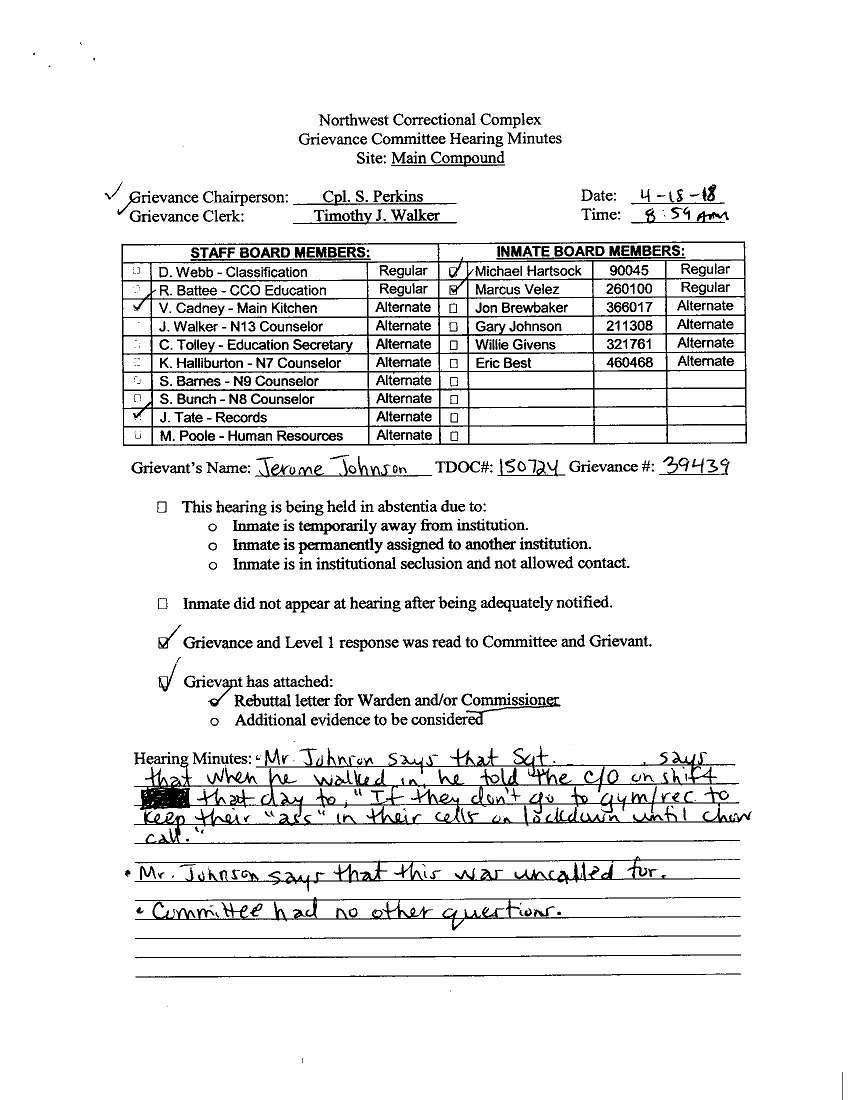 In his rebuttal to the Grievance Committee’s response, Johnson acknowledged that “Policy need [sic] to be followed” but that PREA dictates that the offending officer be “100 feet away from his victim at all times.”

“By law he is the one that needs to be moved,” Johnson wrote.  He also alleged that the officer has retaliated against him by placing “2 contact notes on me,” a term for which The Post & Email is in the process of seeking clarification from Johnson.

On page 2 of the rebuttal, Johnson indicated that he would be sending a copy to TDOC Commissioner Tony Parker.  On that final page of enclosures, Johnson accused the facility and the TDOC of “official oppression” against him as a result of the PREA violation. 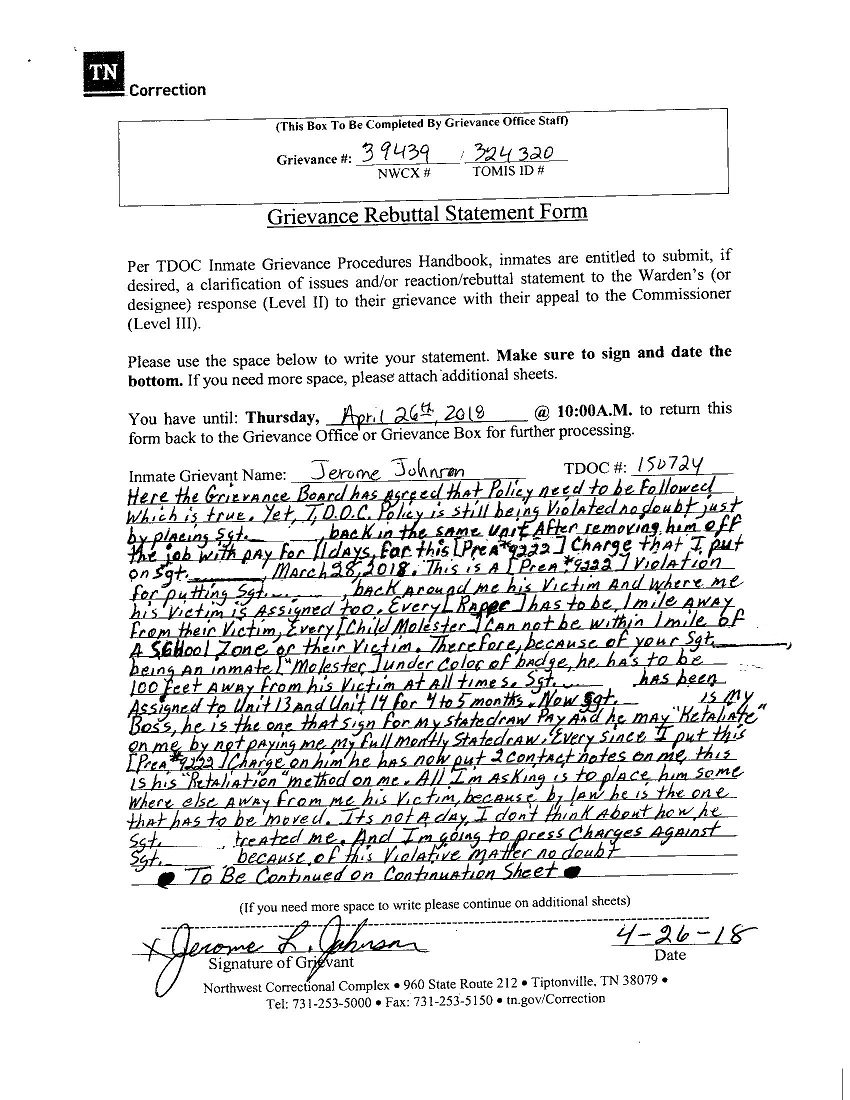 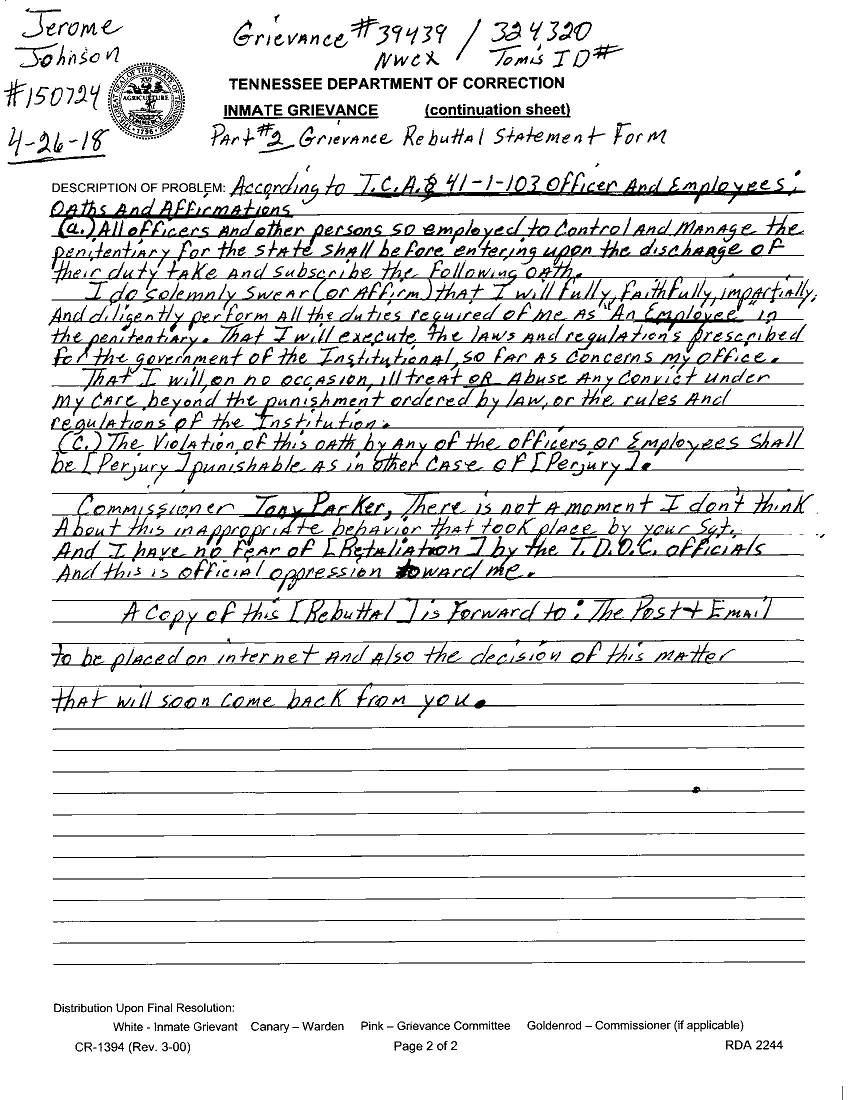