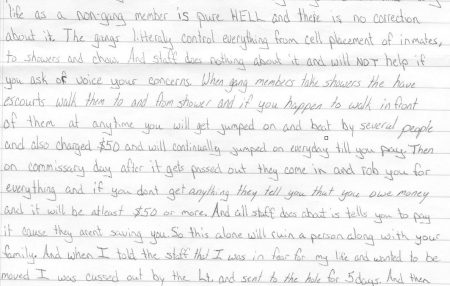 (Jan. 6, 2020) — A letter received Saturday alleges that the Northwest Correctional Complex (NWCX) remains a dangerous prison in which gangs dictate daily routines and extortion payments, reportedly with the knowledge and consent of correction officers.

The author of the letter requested that his name be withheld to avoid retaliation, and the envelope in which it was received bears the name of a different inmate and inmate number.

The inmate indicated that he wrote the letter on “Friday 11-23-19,” although November 23, 2019 was a Saturday. The envelope is postmarked “26 DEC 2019” from Memphis and bears a Christmas stamp. We therefore do not know if the letter was written on November 23 and held for approximately a month before it was mailed or if the date should have read “12-23-19,” although that day was a Monday.

The writer, who claims he is serving time for drug abuse, reported that gang members regularly “jump” inmates with whom they have a quarrel and demand $50 in extortion payments. “Then on commissary day after it gets passed out they come in and rob you for everything and if you don’t get anything they tell you that you owe money and it will be at least $50 or more. And all staff does about is tells you to pay it because they aren’t saving you. So this alone will ruin a person along with your family,” the inmate wrote on page 1.

Gang violence has been reported for years to this publication by a number of Tennessee inmates in various prisons around the state.  Nearly three years ago, Nashville’s WSMV posted a four-part series detailing reported gang activity and other questionable conditions within Trousdale Turner Correctional Center (TTCC), one of Tennessee’s privately-run prisons.

On Saturday, WREG reported that in the neighboring state of Mississippi, the deaths of five inmates in three different facilities between Sunday, December 29 and Friday, January 3 stemmed from “gang violence,” according to outgoing Mississippi Department of Corrections Commissioner Pelicia Hall.

The sister of one of those killed, Candice Dobbins, was quoted by the paper as having said, “Really, the prisoners run the facilities. I know guards have to talk with inmates to keep control of other inmates.”

“Mississippi’s prison system has struggled to fill guard vacancies, with Hall saying it’s difficult to attract people with salaries that start below $25,000 a year,” the outlet further wrote. “Some guards end up bringing illegal drugs and cellphones into prisons. Criminal charges were filed in 2014 against 26 state correctional officers.”

The NWCX inmate claimed that “when I told the staff that I was in fear for my life and wanted to be moved I was cussed out by the Lt. And sent to the hole for 5 days. And then I was never asked about what was going on nor was I helped in anyway then the whole time I was in the hole on pending investigation I never recieved any of my property and was never given a toothbrush, soap or shower and come to findout they told another inmate to pack my belongings.” [sic]

He reported that “after 3 weeks I still haven’t got anything such as hygene items or change of cloths and I have followed all procedures and forms to get new stuff.” [sic]

“The hole,” more formally known as “protective custody” or “PC,” was for some reason cut short, the inmate said, and that prison staff “took me in cuffs back to the same unit I told them I was having problems in and threw me in the cell with one of the people I told them I was having a problem with and basically told me that my life doesnt matter and that they were about to go home.” [sic]

On page 2, the inmate maintained, “I dont cause problems I show respect to all I go up for parole in a few months and I want to live to get back to my family and I dont want my family ruined because they care and love me so they pay these gangs to keep something from happening to me cause I’m not safe and the staff wont allow me to go in to Protective Custody witch is made for this reason.”

His parole could now be in jeopardy, he explained later in the letter.

Both direct and indirect extortion payments have been reported to The Post & Email.  WSMV, too, reported the mother of an inmate claiming to have made “protection money” payments to gang members, at times on multiple occasions during a single day, to keep her son safe.

In the letter, the inmate specifically mentioned that gang members have protection while walking to and from shower facilities.  In the same article referenced above, WSMV’s then-long-term anchor and investigative reporter Demetria Kalodimos reported that the mother of an inmate “said gang members appear to control everything, including movement to and from the showers. If protection isn’t paid, inmates are liable to be beaten, stabbed or worse. It’s called ‘shower security.’”

Regarding access to drugs at Northwest, the inmate wrote, “…as a recovering addict I am trying to stay clean and all day everyday I have people putting them in my face and I struggle cause Im not perfect and dealing with all the things in here along with my personal issue’s like family and all I want to do is get back to them cause they are what matters. And I dont want to have drugs around me and being in the D.O.C. (Department Of Corrections) I shouldnt be and I should be able to get help. But its a joke and it is eazier to get drugs in here than it was on the street.”

He then reported having been informed of his assignment to a “vocational class” after he was expected to appear for the first time and then receiving a “write-up” for the alleged absence. Further, he said he was locked out one day on his way to class, resulting in a placement in “lockup.”

The inmate described himself as “PREY to all” at Northwest because he is not a gang member. “I just want to get to a place where it is calm and laid-back where I can do my time and go home,” he added. “This is my first and last time in prison. But I don’t care where I got ago to finish my time a piece with structure in order. I tried to get in P. C. Here and they denied me and put me in handcuffs and carried me back to the middle of the chaos.”

He said that he would prefer being “locked in the cell 24/7 other than taking a shower” than to his current circumstances. “I dont want to be locked in like that all the time. But if it gets me out of Unit 14 at Northwest Complex I am willing.”

The complete letter can be read below.  The Post & Email has removed the name of the referring inmate on page 1 as well as the writer’s name and inmate number at the end of page 3. 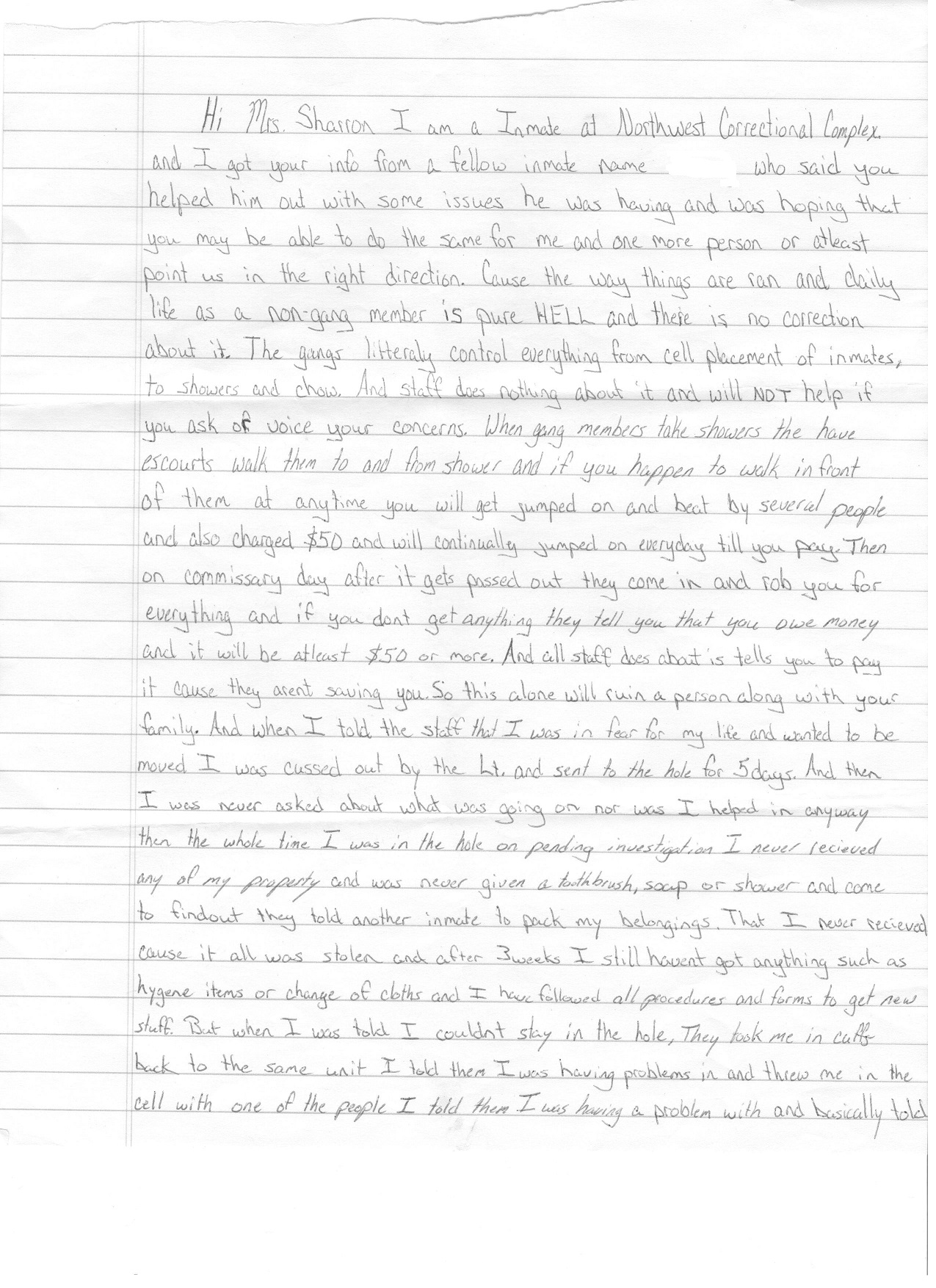 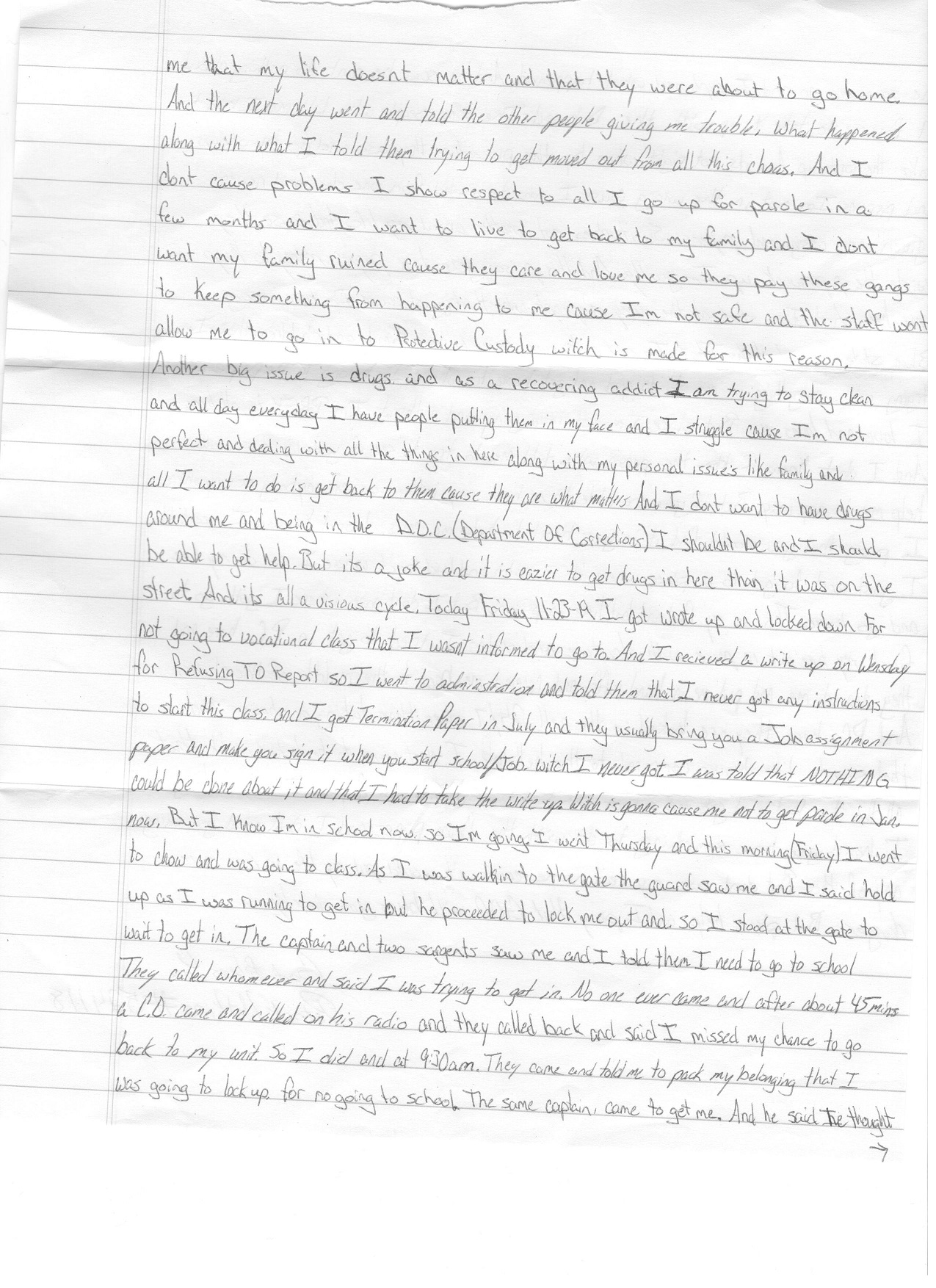 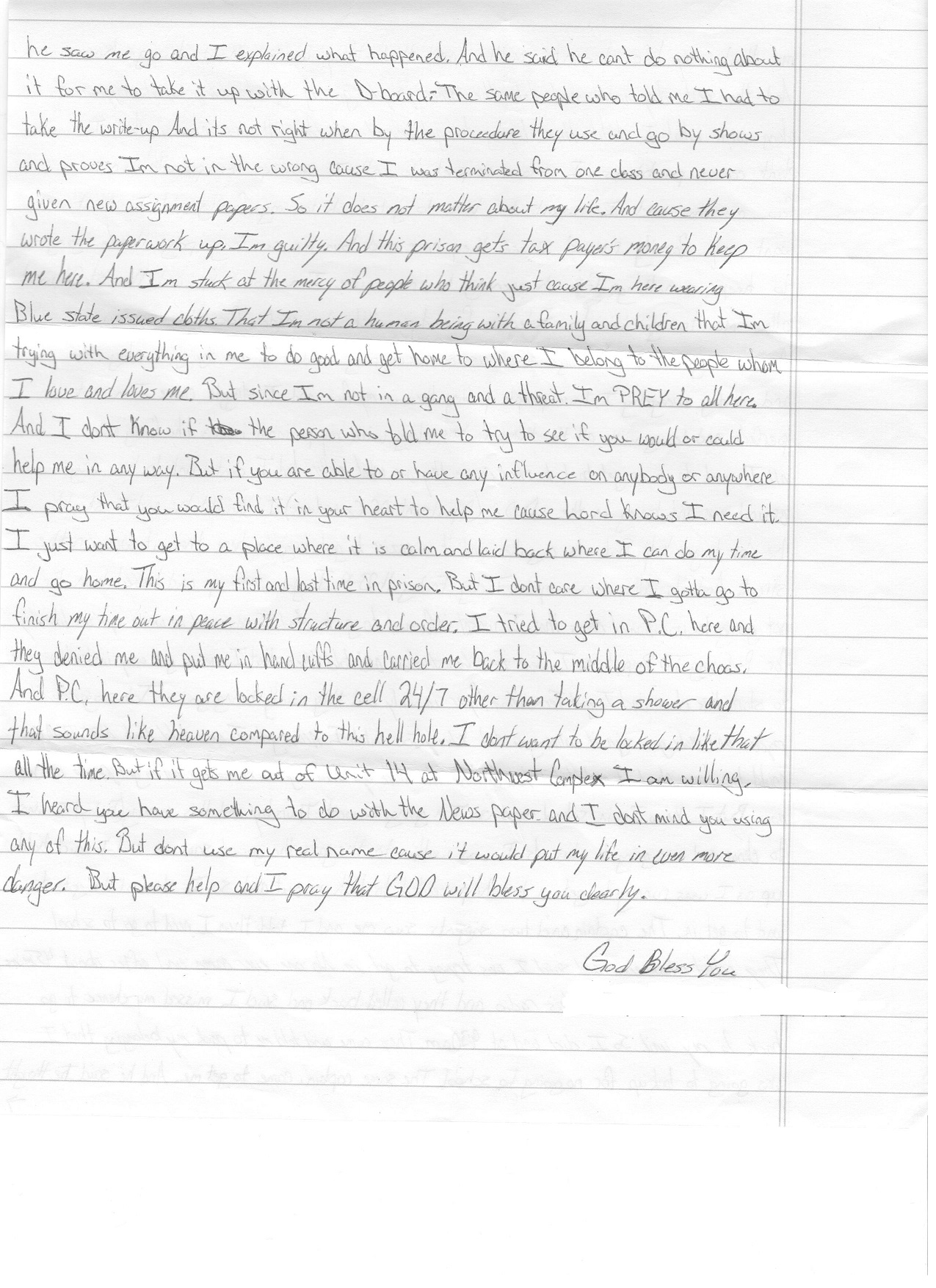 Tennessee Inmate Claims Drugs “Easier to Get” in Prison than “on the Street” added on Monday, January 6, 2020