“I HAVE PROOF OF BEING EXTORTED” 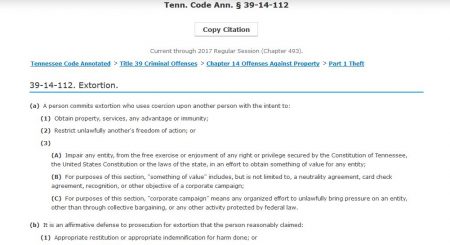 (May 7, 2018) — In an interview on Monday, an acquaintance of an inmate housed by the Tennessee Department of Correction (TDOC) told this writer that he/she has made extortion payments to gang members in the hope of providing some measure of safety to the inmate in question.

The inmate has resided at several Tennessee prisons over the last several years, a considerable portion of which has been spent in protective custody (PC) after he received repeated threats from gang members.  Following those threats, his acquaintance said, he/she received numerous phone calls which were purposely “vague” but demanded that a certain amount of money be sent in a particular manner.

The individual is not the first to have told this writer that he/she has paid extortion money to gang members inside Tennessee’s prison system.  A different person last year said that he/she was too frightened to report the matter to the FBI or Tennessee Bureau of Investigation (TBI).

On Monday the inmate’s acquaintance told The Post & Email that he/she has sold personal belongings to raise the money demanded by the gang members.  He/she said he/she has contacted a number of prison supervisors and TDOC Commissioner Tony Parker on multiple occasions by both phone and email. After each email sent to Parker, the acquaintance said, punitive action was taken against the inmate rather than the gang members extorting the money.

In 2013, WSMV in Nashville reported that as a result of its exposure of inmates’ access to contraband, including drugs, cell phones and therefore the internet, where they posted to Facebook, “The Tennessee Department of Correction launched investigations in 14 prisons and disciplined 70 inmates.”

The introduction of contraband, which includes cell phones, into correctional facilities is a serious violation of state law and is not tolerated by the Tennessee Department of Correction. While this is a national problem, the Department works to intercept and recover any contraband. In addition, we work with our law enforcement partners to actively prosecute those who violate that law. Recently there have been a series of blog posts calling into question the Department’s commitment in addressing this national problem. With regard to the individuals in the blog, the Department is already actively investigating these inmates and working with the social media networks to have the pages removed.

This past weekend, a task force made up of nine law enforcement agencies including TDOC, the Tennessee Highway Patrol, TBI, the Drug Enforcement Administration, Metro Nashville Police, the Immigration and Customs Enforcement launched the first of these efforts with a series of unannounced searches at facilities across the state. Nearly 300 vehicle searches were conducted, leading to the recovery of cell phones and drug paraphernalia. Future joint efforts are planned and include intelligence-driven operations both in correctional facilities and in the community, an increased push to prosecute those found attempting to introduce contraband, and legislative and technological efforts.

On January 31, 2018, the TDOC issued a press release stating that “The Tennessee Department of Correction (TDOC) Commissioner Tony Parker will travel to Washington, DC next month to take part in a meeting with officials from the Federal Communications Commission. This meeting is the result of a letter of congressional support regarding efforts to reduce contraband in penal facilities.”

The letter, which was addressed to Federal Communications Commission (FCC) Chairman Ajit Pai, was signed by 52 Members of Congress including Tennessee’s own U.S. Representatives David Kustoff, Diane Black, Chuck Fleischmann, Phil Roe and Marsha Blackburn. The letter references the dangers of contraband cell phones which “are used nationwide by inmates to plan attacks and intimidate victims, witnesses, and correctional staff.”

While Trousdale is owned and operated by private prison company CoreCivic, the individual with whom we spoke on Monday day said that he/she has made extortion payments to gang members at TDOC-run prisons.  “They pick out certain people without gang affiliation and see who they can get money from, and once they start, they don’t stop.  They found me through him,” he/she added.

In regard to how the gang members obtained his/her telephone number, the acquaintance said that CoreCivic prisons do not maintain “phone lists” for each inmate with approved outside contacts as the state-run prisons do.  “They never identified themselves, but they said, ‘Your XXXXXX wants to know if you have the money.’  They would say they were calling on behalf of him,” he/she said.

The individual said he/she has paid gang members at two different state-prisons in amounts ranging from two to four figures and that at times, a second call would arrive saying that the payment made, although agreed upon, was not enough.

When we asked how the money reaches the gang member, he/she said that at one prison, “it was all Paypal cards that you can buy at Walgreens. It’s a number from the back of the card that you give them, like Western Union.”

In some cases, the inmate’s acquaintance said, the gang member wants the money added to another presumed gang member’s phone account, while at other times, they want money sent directly to their own accounts.  “They all know each other and share PINs,” our contact said.

He/she said that emails sent to Parker’s office which The Post & Email has seen detailing the extortion money and threats to the inmate’s life received the response that the issue would be referred to “IA” (Internal Affairs).  The outside person said, however, that that evening, the inmate was unexpectedly searched in his cell by two correction officers, his belongings packed, and “they handcuffed him extremely tightly, twisting his hands.”  “Everything is going to be alright as long as my buddy and I aren’t harmed,” the inmate reportedly later told the outside contact, quoting the correction officers as they moved him out of his cell. The inmate reportedly said that the correction officers were told he was “extremely dangerous.”

In regard to his/her recent communication with Parker, the outside contact said, “I told him exactly how much I had paid for the past two weeks and that it seemed that the inmates are allowed to threaten other inmates.  I told him the whole story, basically.  I have proof of being extorted.  He responded to none of the emails except to say that he was referring it to IA (Internal Affairs).  Every time I’ve emailed him, he’s had to do something, but it’s to the inmate and not the ones threatening him.”

The acquaintance said he/she has also spoken to staff members at the prison where the inmate is currently housed as well as someone in Internal Affairs and a security officer to no avail. “I’ve emailed Nashville, NBC, CBS, ABC and Fox and never heard back,” the individual added.

He/she said that the inmate, with whom he/she speaks frequently, has said he has observed contraband coming in to the prison and would gladly speak with any bona fide investigator to relate what he has seen.

The TDOC’s statement on contraband concludes with:

We encourage anyone with knowledge of any threat to the safety and security of our institutions to call 1-844-TDC-FIND. This line is manned 24/7 to receive viewer tips; each and every tip we receive is investigated. The information received is then used by the Department’s Office of Investigation and Compliance (OIC) to investigate the criminal contraband network. OIC investigations don’t stop at shutting down the illegal social media accounts. The goal of these investigations is to stem the flow of contraband into our facilities and to shut down these criminal enterprises.

Those that are visiting an offender in prison must understand that these visits are a privilege. Visitors who abuse this privilege by bringing or attempting to bring contraband inside our prisons will be prosecuted. Also, employees discovered introducing contraband into state prisons face termination and criminal prosecution for violating the laws they have sworn to uphold.