MCCX Inmate Reports Threat of Extortion Extending to Outside Relative 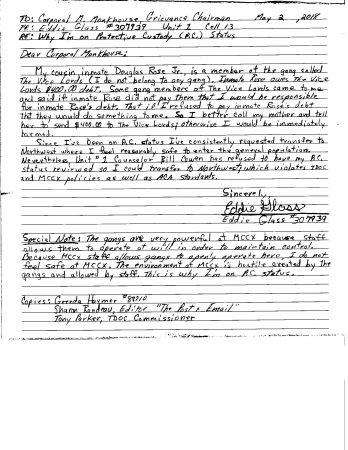 (May 16, 2018) — A copy of a memo received by this publication on Tuesday states that an inmate at the Morgan County Correctional Complex (MCCX) is being extorted for money and threatened with physical harm as a result of his cousin, also an inmate at the same facility, having been allegedly “a member of the gang called the Vice Lords.”

The memo is addressed to “Corporal M. Monkhouse, Grievance Chairman” with the subject, “Why I’m on Protective Custody (P.C.) Status.”

As The Post & Email had not received correspondence from either Glass or Rose prior to the memo (shown above), we verified the incarceration status of each through the Tennessee Department of Correction (TDOC) inmate lookup tool. 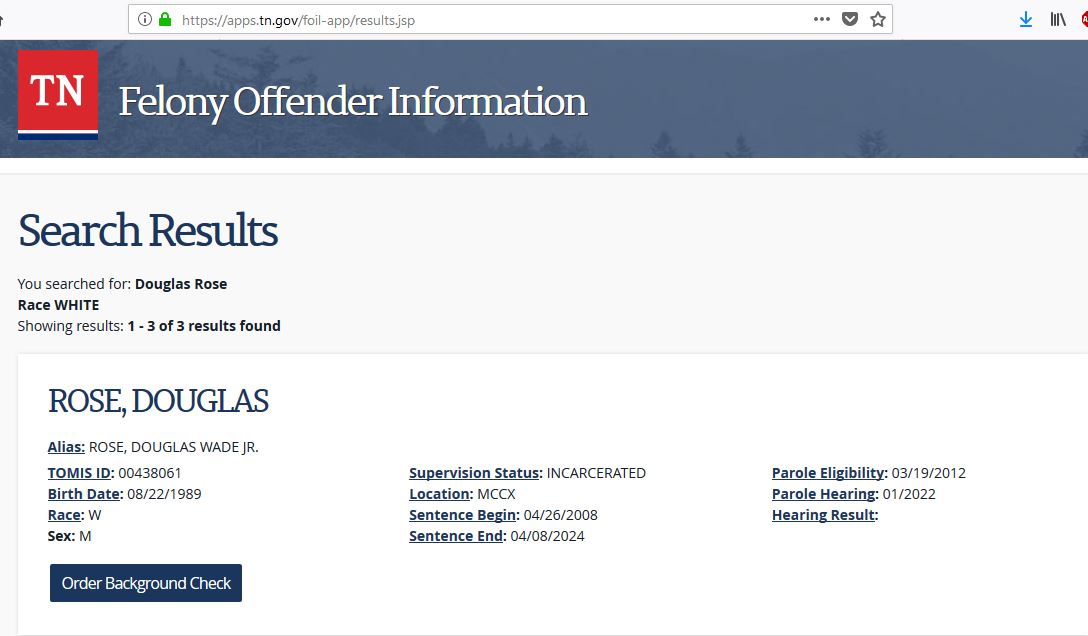 As has been reported for many months, a number of MCCX inmates, including prolific writer Grenda Ray Harmer, have claimed that their placement into protective custody has not been properly reviewed nor the possibility of a timely transfer to another prison where their presence within the general population would be deemed less dangerous.

A placement into PC is often made after a gang member threatens a “non-affiliated” inmate assessed as vulnerable at any given moment.  The placement must be approved by the warden and accompanying documentation verifying the threat maintained on file until after the inmate is relocated, often to a different facility.

“Since I’ve been on P.C. status I’ve consistently requested transfer to Northwest where I feel reasonably safe to enter the general population,” Glass continued.  “Nevertheless, Uni #1 Counselor Bill Cowen has refused to have my P.C. status reviewed so I could transfer to Northwest; which violates TDOC and MCCX policies as well as ACA standards,” he concluded the memo.

“ACA” stands for “American Correctional Association,” who The Post & Email has attempted to contact previously regarding inspection reports and alleged violations reported to us by Harmer and many others within the TDOC system.

A memo from Harmer contained in the same envelope as the Glass memo alleged that a PC status “hearing” on his behalf was conducted by prison personnel outside of his cell within earshot of other inmates and staff.  In that writing, Harmer said that the “hearing” was the first attempt made by MCCX staff to assess his PC status despite his placement in the unit last August 1.

TDOC Administrative Policies and Procedures, #404.09, clearly states that reviews for PC inmates must be completed “every seven days” during the first 60 days of placement in the unit and “at least once every 30 days” thereafter.

Gang activity is alleged to be significant at MCCX and other Tennessee prisons.  In a “Special Note” below his signature, printed name and TDOC number, Glass wrote, “The gangs are very powerful at MCCX because staff allows them to operate at will in order to maintain control.  Because MCCX staff allows gangs to openly operate here, I do not feel safe at MCCX.  The environment of MCCX is hostile created by the gangs and allowed by staff.  This is why I’m on P.C. status.”

Glass did not say how the Vice Lord member was able to threaten him while he is in protective custody.  However, last fall Harmer reported that despite his placement there, the same gang member who originally threatened him, causing him to enter PC last summer, was moved to a cell in the unit in close proximity to his.

After Harmer filed a number of grievances, the gang member was reportedly moved away.

Threats resulting in the extortion of relatives and other loved ones on the “outside” has been reported to this publication on a number of occasions, most recently here.  WSMV of Nashville has also issued similar reports relatives paying “protection money” to prison gang members in the hope that their loved ones will receive some measure of safety, albeit temporary.

MCCX Inmate Reports Threat of Extortion Extending to Outside Relative added on Wednesday, May 16, 2018