INMATE ASKS WARDEN:  “YOU TRYING TO PUT A HIT ON ME?”

(Nov. 7, 2017) — In a report received from Nooganomics radio show host and former Chattanooga Times Free Press copy editor David Tulis on Sunday evening, Tennessee Department of Correction (TDOC) inmate Grenda Ray Harmer, whose case The Post & Email has followed closely for approximately a year, stated that a Crips gang member was moved to a cell directly across from his with the warden’s knowledge that he posed a threat to Harmer.

On July 28 of this year, Harmer documented that the gang member was allowed, against TDOC policy, out of his cell while the pod was unattended by a correction officer to enter his cell, where he threatened to steal property and brandished a knife.

Harmer said he then reflexively “laid hands” on the gang member to protect his cellmate and himself, reinjuring a sprained ankle in the process.

At the time, Harmer was recovering from a near-fatal hunger strike which landed him at the University of Tennessee Medical Center for several days at the beginning of July.  In a letter written to The Post & Email just after his release, Harmer included a hospital menu he was given from which to make meal selections while a patient.

Since the altercation with the Crips member, Harmer has stated that he believes staff at the Morgan County Correctional Complex (MCCX), where he has been housed since early June, “orchestrated” the incident so that he would need to be placed in protective custody (PC).

At MCCX, protective custody is accomplished by means of the “maximum security” section of the prison.

To The Post & Email’s knowledge, Harmer remains in solitary confinement, necessitated by his “PC” status, but is now in direct physical danger from the Crips member during recreation times, when all of the inmates in his section reportedly exercise together.

His letter, dated November 1, 2017, is copied to The Post & Email but has not reached us as of press time. 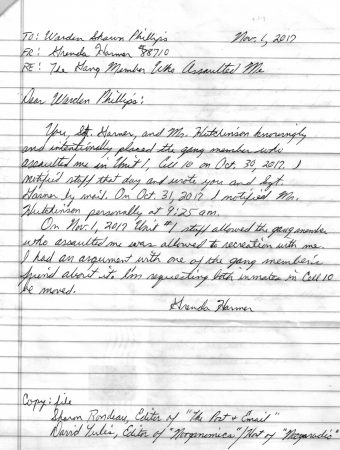 Tulis forwarded Harmer’s letter describing the new development as well as a second email communication he sent to TDOC spokeswoman Neysa Taylor requesting action on the gang member’s strategic placement near Harmer.  In her response, Taylor appears to have placed the onus on Harmer rather than on MCCX Warden Shawn Phillips.

The Department does not comment on any pending investigations. In addition, all inmates are aware of the procedures to request a transfer or change of cell assignment. Your “correspondents” are encouraged to follow the prison’s policy and procedures.

Sent from my iPhone

*** This is an EXTERNAL email. Please exercise caution. DO NOT open attachments or click links from unknown senders or unexpected email – STS-Security. ***

Dear Mrs. Taylor, I have received the following letter about the prospect of an assault at Morgan County Correctional Complex, arranged by your warden, Shawn Phillips, and executed by subordinates and designees. The prospective target: Grenda Harmer, No. 88710

I demand this placement without proper flagging be undone, and that Mr. Harmer be protected from known gang members.

My listener asks for an explanation about this placement of a Crips member nearby Mr. Harmer, and having the  Crips member freely associated with Mr. Harmer and possibly others who are my correspondents.

Since you have been aware of this matter for several days, I request news from your department about what you have done.

In an initial response, Taylor denied Tulis’s request for an interview with TDOC Commissioner Tony Parker.  She then stated, “I will look into Mr. Harmer’s latest claims and provide you a statement via email.”

An October 30, 2017 letter from Harmer first revealed the relocation of the Crips member to Harmer’s cell, in which Harmer asked MCCX Warden Shawn Phillips, “You trying to put a hit on me?” 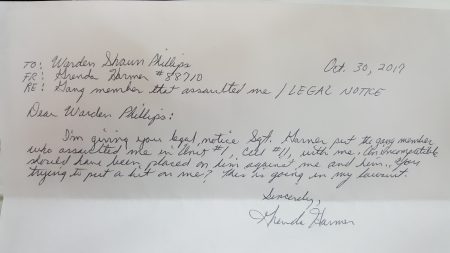 Harmer’s use of the word “incompatible” emanates from TDOC Policy #404.09 contained in the section of its Administrative Policies and Procedures titled “Protective Services.”  Under subsection IV.B., it is stated that “incompatible” inmates are those who “pose a significant and substantiated potential for physical harm to one another.” 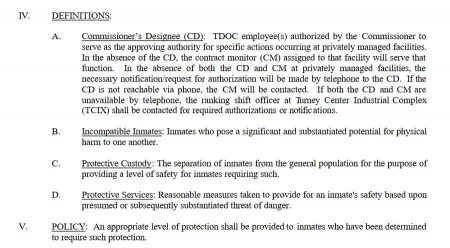 Taylor has previously contended that Harmer’s reports are “fictitious,” an assessment with which The Post & Email disagrees based not only on Harmer’s documentation, but also reports from a myriad of other Tennessee state inmates and their relatives and as investigated and confirmed by Nashville’s Channel 4.

Over the last year, Harmer has provided hard evidence of malfeasance on the part of two privately-run prisons where he was housed previously as well as a significant number of grievances he has filed while at MCCX which he said never received a response.

Harmer’s communications are often copied to at least two state representatives, Barbara Cooper and John Ray Clemmons, as well as to Tulis, Channel 4′ Demetria Kalodimos, this writer and other members of the news media. Harmer believes that he has been retaliated against repeatedly for exposing corruption within the TDOC and a lack of action on the part of the legislature and other elected representatives regarding TDOC prison conditions and mistreatment of inmates.

Despite a formal grievance procedure adopted and published by the TDOC, Harmer and many other inmates have reported that their written grievances often never receive a response.