“LET’S SEE HOW THEY EXPLAIN THIS ONE”

(Jul. 6, 2017) — On Thursday, as also occurred on Monday, The Post & Email received three separate envelopes from TDOC inmate Grenda Ray Harmer, #88710, who has been on a hunger strike since the early afternoon of June 5.

As Harmer stated in correspondence received on Monday, he is sending documentation to The Post & Email which he believes might prove valuable and which he has not sent previously.

Prior to his relocation to the Morgan County Correctional Complex (MCCX) on June 3, Harmer had demonstrated that he was paid for work which he never performed while at the Trousdale Turner Correctional Center (TTCC) in Hartsville, Trousdale County.

Payments were made to his trust account by CoreCivic, owner/operator of TTCC and Harmer’s more recent previous facility, South Central Correctional Facility (SCCF).

Harmer made two notations on the “Trust Fund” documents of “Fraud.”  In what he labeled example “1” dated March 14, 2017 in the amount of $44.88, Harmer wrote, “I was paid this state pay while at TTCC for a job that didn’t exist and work I never performed.”

That amount was reported in Harmer’s earlier account of having been paid for a “ghost job.”

The second occurrence of what Harmer said was an unearned deposit appears on an entry dated April 12, 2017 in the amount of $43.17, after Harmer was moved from TTCC to SCCF on April 5.  However, the notation indicates that “TTCC” made the deposit.

In the letter explaining the documentation, Harmer wrote, “You are already aware of Number 1. That’s the Barbara Cooper 3-31-17 letter,” referring to correspondence he sent to Tennessee state representative Cooper notifying her of the fraud. “This was while I actually was at Trousdale,” he continued. “Its [sic] Number 2 that I would find funny if it wasn’t criminal. That state pay was paid me by TTCC prison officials while I was physically incarcerated at the South Central facility. Isn’t that crazy?!” 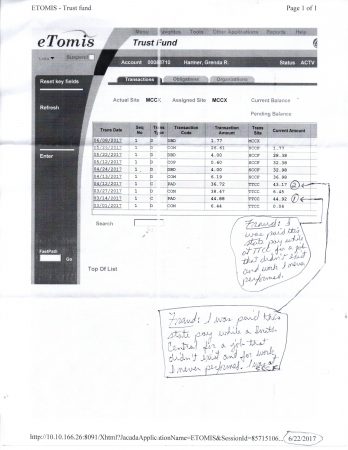 The Post & Email left a message with Cooper’s office about Harmer’s claim but did not receive a response.

One of Harmer’s demands of MCCX authorities to end his hunger strike is for the Tennessee Department of Correction to return him to the Turney Center Industrial Complex (TCIX), where he reportedly had a job in the Wood Plant which allowed him to earn a small amount of money regularly.

Harmer is also protesting what he has described as “abuse” by MCCX intake staff to include the confiscation of a pair of boots and other personal items.  While some of his belongings have been returned, the boots have materialized as of this writing and to the best of our knowledge.  Harmer also has asked that he be returned to the general population and celled with an inmate who is not a gang member.

As reported over the last 14 months, this publication has received scores of letters from TTCC inmates expressing frustration over the lack of employment opportunities at Tennessee’s newest prison as well as a myriad of other problems detailed in a four-part televised series by Nashville’s Channel 4 (WSMV) the week of June 19.

Many inmates who were moved to TTCC had been accustomed to working in the facilities from which they came and found it unusual that there were no job opportunities at Trousdale, which opened in January of last year.

A letter also received Thursday from a current TTCC inmate states that even with a new warden, conditions there are worse than before.

According to medical sources The Post & Email was able to access online, the longest any human has fasted and survived is 73 days, although the time frame is generally much shorter.

CoreCivic employees have been accused of and admitted to falsifying records in the state of Idaho.  Since May of last year, The Post & Email has attempted to obtain comment from Core Civic on several issues, including through a formal letter written in January to Executive Vice President Harley Lappin, copied to TDOC Communications Director Neysa Taylor and Commissioner Tony Parker. No one responded to our inquiry, which included copies of letters from TTCC inmates describing intense suffering from lack of medical care.

WSMV detailed a particularly harrowing story on the last night of its four-night series.

Last August, Taylor told The Post & Email that all of the accounts provided to us by inmates and their relatives about TTCC conditions are “inaccurate.”

Similarly, the TDOC has been made aware of Harmer’s hunger strike but reportedly has provided no intervention.  MCCX has done no medical monitoring of any kind since it began, according to Harmer.

A third and final paragraph explains that the payment of $36.72 was “paid while at SCCF by TTCC.”  Harmer’s final comment was, “Let’s see how they explain this one.” 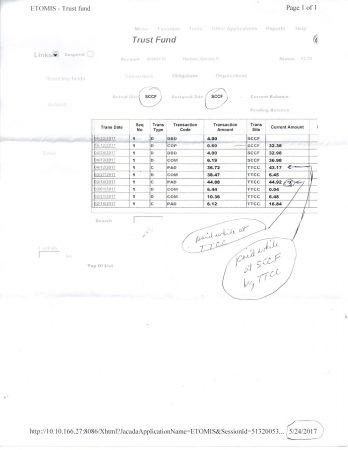 In one of the other letters received on Thursday, Harmer said that he hoped that his hunger strike would come to a “positive” resolution.