IS “INFORMATION” THE SAME AS “INTELLIGENCE?”  DOES THE FBI KNOW THE DIFFERENCE? 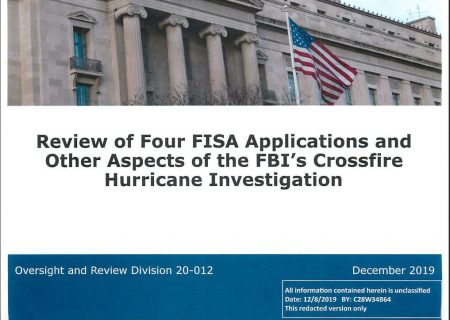 (Dec. 10, 2019) — Page 3 of the Justice Department Inspector General’s report into whether or not the “FISA” application process was abused by the FBI and DOJ in 2016 appears to confirm a claim made last year by then-House Intelligence Committee Chairman Devin Nunes (R-CA22) in April 2018: that there was “no intelligence” in the electronic communication (EC) relied upon by the FBI to initiate its investigation into the 2016 Trump campaign.

The investigation, dubbed “Crossfire Hurricane,” was the first of its kind wherein the U.S. intelligence community investigated a presidential campaign for alleged collaboration with a hostile foreign government.

The report, released at approximately 1:00 PM EST on Monday, will be the subject of DOJ Inspector General Michael Horowitz’s testimony to the Senate Judiciary Committee on Wednesday. Lindsay Graham (R-SC), who chairs the committee, has said the report will not be fully-understood until Horowitz testifies.

On March 17 of this year, The Post & Email reported that former Deputy Assistant Director of Counterintelligence Peter Strzok testified to members of the House Judiciary Committee in June 2018 that he was unable to confirm whether or not he “drafted” or “signed” the EC under questioning from then-Congressman Trey Gowdy (R-SC).

We also reported at the time, “In a number of public interviews, former House Intelligence Committee Chairman Devin Nunes said that after months of requests, when he was eventually permitted to view the electronic communication in question, he found “no intelligence” justifying the opening of an investigation into the Trump campaign.”

After what Nunes said was months of wrangling with the Justice Department associated with the House Intelligence Committee’s own investigation into the origins of the Trump-Russia “collusion” narrative, in April of last year Nunes and Gowdy were permitted to view the EC in the presence of then-Deputy Attorney General Rod Rosenstein. Nunes then declared that it contained “no intelligence” which would have justified the opening of the counterintelligence operation into the campaign.

“The meeting came a day after Nunes threatened to take legal action — including contempt proceedings and impeachment — against Rosenstein and FBI Director Christopher Wray for failing to produce a clean copy of the memo, known as an electronic communication or EC, that was responsive to an August 2017 committee subpoena,” wrote Catherine Herridge on April 11, 2018, then of Fox News.

Referring to the EC, Nunes told “Sunday Morning Futures” host Maria Bartiromo on April 22, 2018, “It’s the original intelligence, the original reason for the counterintelligence investigation was started [sic]…We are not supposed to spy on each other’s citizens, and it’s worked well. And it continues to work well. And we know it’s working well because there was no intelligence that passed through the Five Eyes channels to our government,” Nunes continued, speaking of the five nations which, bound by a common language, regularly share intelligence information (UK, U.S., Australia, New Zealand, and Canada). “And that’s why we had to see that original communication.”

The inspector general’s Executive Summary, presented in columnar format, confirms that surveillance was conducted on four aides connected with the 2016 Trump campaign:  Carter Page, George Papadopoulos, Lt. Gen. Michael T. Flynn (Ret), and Paul Manafort.  Of those, Page became the subject of a series of four Foreign Intelligence Surveillance Act (FISA) warrants, the predicate for which Horowitz did not dispute in the report.

However, shortly after the release of the 476-page volume, Attorney General William Barr and U.S. Attorney for the District of Connecticut John Durham issued separate statements reporting that they are respectively not in agreement with all of Horowitz’s conclusions.  Durham stated that “he disagrees with the Justice Department inspector general’s conclusion that the FBI was justified in 2016 when it launched an investigation into President Trump’s campaign,” as reported by The Washington Times.

Upon his appointment by Barr in May, Durham has been conducting an investigation into how and why the FBI launched its probe into the Trump campaign which in October was announced as having become an expansive “criminal” investigation.

In an interview on Tuesday with NBC News, Barr said, “I think our nation was turned on its head for three years based on a completely bogus narrative that was largely fanned and hyped by a completely irresponsible press.”  Referencing Horowitz, Barr told veteran reporter Pete Williams, “All he said was, people gave me an explanation and I didn’t find anything to contradict it … he hasn’t decided the issue of improper motive. I think we have to wait until the full investigation is done.”

The left-hand column of page 3 of the Horowitz report reads, in relevant part: 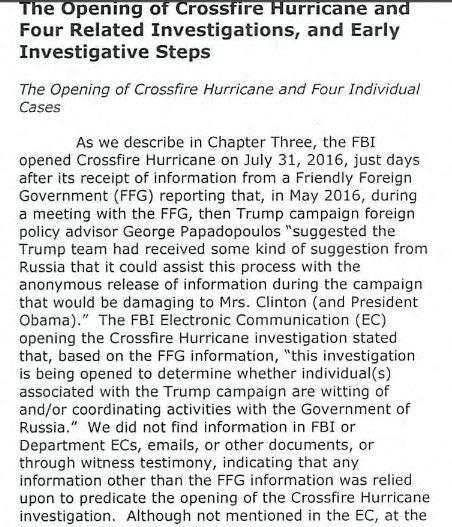 To this writer’s knowledge, the Horowitz report is the first time Barack Obama’s name has been mentioned in the alleged communication between the “Friendly Foreign Government” (FFG) and the FBI conveying what Papadopoulos reportedly said to then-Australian Ambassador to the UK Alexander Downer in a London bar in early May 2016.

For more than a year, Papadopoulos has tweeted that he and three other former Trump associates were placed under surveillance in 2016, with the names he provided matching those in Horowitz’s report released Monday.

The surveillance on Page began in October 2016 and ran through September of the following year. In a number of interviews, Nunes has suggested that the FBI’s probe into the Trump campaign, although officially stated as having been launched on July 31, 2016, actually began much earlier.

In an interview on “Hannity” Monday night, Nunes emphasized that “exculpatory information” on both Page and Papadopoulos was not provided to the FISA Court, as required by FBI and DOJ policy, to provide the court with all relevant information on a potential American surveillance subject.  “Finally, today, people get to know the truth…The FBI ran spies — you can say ‘spies’ because it’s people that were recording the conversations of both Papadopoulos and Carter Page — so this was before the FISA, so they were already spying before the FISA, then there was exculpatory evidence in that for both Papadopoulos and Page, and that was never given to the court on the very first FISA,” Nunes said.

Nunes has also claimed that the FBI’s probe of the Trump campaign’s alleged ties with Russia had its origins in Ukraine, not Russia.  In recent “impeachment inquiry” hearings culminating in two Articles of Impeachment announced Tuesday morning by Speaker of the House Nancy Pelosi, current House Intelligence Committee Chairman Adam Schiff (D-CA28), his colleagues and the media have insisted that Trump and some of his allies are focused on the “debunked conspiracy theory” that Ukraine, and not Russia, interfered in the U.S. 2016 election.

Some Republicans have countered that by stating that it is plausible that more than one nation attempted to interfere.

IG Report Confirms Claim of “No Intelligence” Behind Opening of “Crossfire Hurricane” added on Tuesday, December 10, 2019