COURT PUNTS TO DOJ, WHICH SAYS IT HAS NOTHING 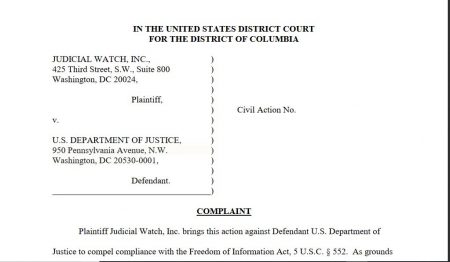 (Aug. 31, 2018) — In a press release on Friday afternoon, government-watchdog group Judicial Watch reported that the U.S. Justice Department stated, in response to a Freedom of Information Act (FOIA) request for transcripts of hearings held on the government’s warrant applications of former Trump campaign advisor Carter Page, that no responsive documents exist.

Between October 2016 and June of last year, the Justice Department and FBI submitted four surveillance warrant applications to the Foreign Intelligence Surveillance Court (FISC) in Washington, DC to collect Page’s communications on the basis that he was acting as an agent for the Kremlin.

Page has denied wrongdoing and has not been charged with a crime.

Last month, the Justice Department released the heavily-redacted applications after JW sued for them. The response received last night reported in Friday’s press release was also the result of a FOIA lawsuit after the government failed to comply with the 20-working-day response time and subsequent appeal.

Page was surveilled in the course of the FBI’s probe into the Trump campaign’s alleged “collusion” with Russian operatives to affect the outcome of the 2016 election. Several congressional committees have been attempting for over a year to discover on what specific intelligence the FBI launched its probe. Some believe that the now-infamous “dossier,” compiled by former British intelligence agent Christopher Steele, was used as a pretext upon which to open an investigation.

After then-FBI Director James Comey was fired in May of last year, Special Counsel Robert Mueller assumed the probe.

The dossier was presented to the FISC as evidence for the necessity of the warrants, but the FBI and DOJ did not inform the court that it was the product of politically-motivated opposition research on Trump paid for by the Hillary Clinton campaign and the Democratic National Committee (DNC).

In a statement, JW President Tom Fitton responded to the DOJ’s reply with, “It is disturbing that the Foreign Intelligence Surveillance courts rubber-stamped the Carter Page spy warrants and held not one hearing on these extraordinary requests to spy on the Trump team. Perhaps the court can now hold hearings on how justice was corrupted by material omissions that Hillary Clinton’s campaign, the DNC, a conflicted Bruce Ohr, a compromised Christopher Steele, and anti-Trumper Peter Strzok were all behind the ‘intelligence’ used to persuade the courts to approve the FISA warrants that targeted the Trump team.”

In testimony on Capitol Hill Tuesday, Ohr reportedly told lawmakers that he kept then-DOJ criminal fraud division head Andrew Weissmann “in the loop” about the dossier.  Weissmann is now a prosecutor on Mueller’s team.

Ohr was shown by text messages released earlier this month to have been in constant contact with Steele, the dossier’s author, both before and after the election.  Ohr was also reportedly in communication with Strzok, who then was second-in-command of the FBI’s counterintelligence unit and texted with his then-FBI colleague, Lisa Page, about an “insurance policy” in the event that Trump won the election over Clinton.

Ohr’s wife Nellie reportedly worked to compile the dossier in the employ of Fusion GPS, which was paid by the DNC through its conduit law firm, Perkins Coie.

In April, after the DOJ permitted him to view the electronic communication (EC) the FBI reportedly used to justify the opening of its probe of the Trump campaign, House Intelligence Committee Chairman Devin Nunes said he saw no intelligence which would have prompted such a decision.

According to JW’s complaint, early this year, Nunes asked the FISC for any existing transcripts from hearings which might have taken place on the Carter Page warrant applications, to which Presiding Judge Rosemary Collyer responded, “You may note that the Department of Justice possesses (or can easily obtain) the same responsive information the Court might possess.”