“THE DAY YOU SIGNED THE DOCUMENT…” 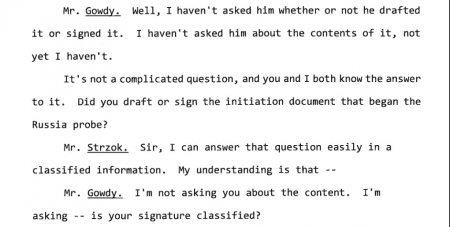 As with his responses to other questions he deemed touching on classified information or “FBI equities,” Strzok declined to answer, a decision reinforced by “Mr. Besse,” counsel for the FBI.

“Did you draft it?” Gowdy persisted, to which Strzok responded, “Same answer, sir.”

At the time, Strzok was still employed by the FBI, albeit in a demoted position in human resources and stripped of his security clearances. Although having expressed a desire remain at the Bureau after 22 years of service, Strzok was fired in August in large part due to an Inspector General’s finding that text messages he exchanged with his FBI colleague and paramour, Lisa Page, showed political bias.

Both Strzok and Page were involved in the investigation into Hillary Clinton’s use of a private email server while she was Obama’s Secretary of State as well as the Russia investigations focusing on the Trump campaign and the extent to which Russian operatives may have attempted to permeate the 2016 U.S. elections.

Gowdy, a former prosecutor who has since retired from Congress and returned to the private practice of law, continued, “It’s not a complicated question, and you and I both know the answer to it. Did you draft or sign the initiation document that began the Russia probe?”

When Strzok replied that he could “answer that question easily in a classified setting,” Gowdy came back with, “I’m not asking you about the content. I’m asking — is your signature classified?” 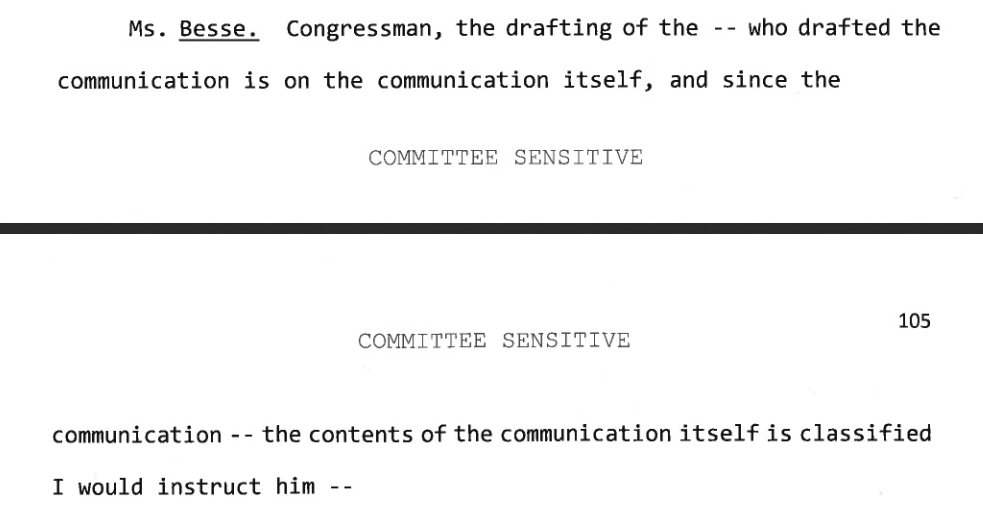 Gowdy then asked if the date on the electronic communication is “classified,” to which Besse said, “I’m not aware that the date is classified, but who –“

“How is his signature classified if the date is not classified?” Gowdy pressed.

After diverting to asking Strzok about trips he may have taken in May 2016, purportedly two or more months before the FBI officially opened its counterintelligence investigation into the Trump campaign, Gowdy returned to the topic of the electronic communication. On page 8, Gowdy stated, referring to one of Strzok’s text messages to Page, “Now, the day the Russia probe began, the day it was initiated, the day you signed the document initiating it this is what you said: And damn this feels momentous.  What feels momentous?”

“Sir, I am happy to discuss that in the classified setting,” Strzok responded, referring to a session then-House Judiciary Chairman Bob Goodlatte said he would schedule to question Strzok about such information.

In a number of public interviews, former House Intelligence Committee Chairman Devin Nunes said that after months of requests, when he was eventually permitted to view the electronic communication in question, he found “no intelligence” justifying the opening of an investigation into the Trump campaign.

Democrats, who now control all House committees as a result of gaining the majority in the 2018 midterm elections, have indicated they will continue seeking evidence of “collusion” between the Trump campaign and Russian operatives regardless of what Mueller’s report might yield.  In addition, Democrats plan to broaden the scope of their investigations into Trump’s business dealings before he took office; those of his grown children, who now run the Trump Organization; and whether or not Deutsche Bank was a vehicle for “money-laundering” to the Russians through the Trump panoply of businesses.

Trump has called the Democrats’ plans “presidential harassment” and denied any wrongdoing.

For his part, Nunes, now the ranking member on the House Intelligence Committee, has said that dozens of “criminal referrals” will be made to the Justice Department in the coming weeks identifying individuals who lied during their testimony to Congress, presumably about their actions in the Trump-Russia investigation.

Prior to Mueller’s appointment, unvetted information later known as the “Steele dossier” compiled by former British intelligence agent Christopher Steele was presented to the Foreign Intelligence Surveillance Court (FISC) to obtain four successive surveillance warrants on then-Trump informal campaign advisor Carter Page (no relation to Lisa Page). Carter Page has never been charged with a crime and has filed a number of lawsuits claiming defamation as a result of the warrants and their applications.  Rosenstein, Comey, former Deputy Attorney General Sally Yates and FBI General Counsel Dana Boente are among those who approved the applications. FBI policy states that applications made to the secret court alleging a need to monitor an American citizen’s communications must contain verified information and present any exculpatory information on the proposed subject of the warrant at the same time.

In a number of television interviews, Nunes has claimed that Carter Page was the subject of “FISA abuse” and suggested that the criminal referrals House Intelligence Committee Republicans plan to make will focus on that aspect of the Russia investigation, among others.

In May 2017, the FBI relinquished its Trump-Russia counterintelligence probe to the office of Special Counsel Robert Mueller, who was brought in by Deputy Attorney General Rod Rosenstein the week after then-FBI Director James Comey was fired. In January 2019, then-Acting Attorney General Matthew Whitaker unexpectedly said during a press conference that he believed Mueller’s probe was in its final stages, and Mueller’s report is much-anticipated by both Democrats and Republicans in Congress.

While nearly three dozen indictments have issued from Mueller’s probe, which reportedly has cost American taxpayers more than $25 million, none has cited “collusion” or “conspiracy” between any Americans and Russians to impact the 2016 election.