“I NEVER DID ANYTHING WRONG”

(Mar. 13, 2019) — In response to Speaker of the House Nancy Pelosi’s remark on Monday that an impeachment effort is “not worth it” as well as divisive to the electorate, President Donald Trump on Wednesday morning tweeted, “I greatly appreciate Nancy Pelosi’s statement against impeachment…”

Trump was personally silent on the matter until Wednesday, although Senate Majority Leader Mitch McConnell had said during public remarks that he “agreed” with Pelosi’s assessment. 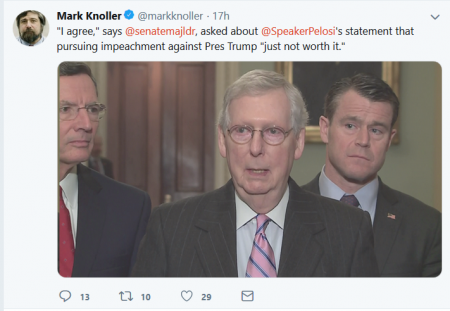 Since regaining a majority in the House of Representatives in the midterm elections, Democrats have vowed to investigate a myriad of aspects of Trump’s personal and professional life as well as allegations of “abuse of power” and “obstruction of justice” since he was inaugurated.

The reported goal is to vote on Articles of Impeachment, multiple mainstream sources have reported, with multi-millionaire Tom Steyer reportedly acting as a strong influence.

On Tuesday afternoon, Rep. Al Green (D-TX9) told Fox News’s Neil Caputo that he will again introduce Articles of Impeachment based on what he believes is Trump’s “unfitness” and “bigotry.” Green first introduced impeachment resolutions in December 2017 and January 2018 which were “tabled” with bipartisan support.

During the interview, Caputo mentioned that constitutionally, “high crimes and misdemeanors” is the bar set by the Founders in Article II, Section 4 of the Constitution to begin the process of removing a president from office.  Also contemplated by the Framers as worthy of impeachment was “Conviction of, Treason” and “Bribery.”

Green had earlier on Tuesday made similar remarks on C-Span.

Shortly after the 116th Congress was sworn in, Rep. Brad Sherman (D-CA30) introduced Articles of Impeachment, supported only by Green.  He reportedly now believes that impeachment should not proceed “until we can convince the country,” Roll Call reported on Tuesday.

If Articles were to be passed out of the House, the Senate would become the trial court, to be presided over by the Chief Justice of the U.S. Supreme Court.

Pelosi, too, told The Washington Post that she believes Trump to be “unfit” and that he “disregards the Constitution.”  “We have a very serious challenge to the Constitution of the United States in the president’s unconstitutional assault on the Constitution, on the first branch of government, the legislative branch. … This is very serious for our country,” she told The Post‘s Joe Heim last week.  She agreed with Green that Trump has demonstrated “discrimination and bigotry” in his approach to immigration policy.

There is no mention of “high crimes and misdemeanors” in the interview.

When Heim said, “There have been increasing calls, including from some of your members, for impeachment of the president,” Pelosi responded, “I’m not for impeachment. This is news. I’m going to give you some news right now because I haven’t said this to any press person before. But since you asked, and I’ve been thinking about this: Impeachment is so divisive to the country that unless there’s something so compelling and overwhelming and bipartisan, I don’t think we should go down that path, because it divides the country. And he’s just not worth it.”

Her remarks caught some in the media by surprise.

After expressing his “appreciation” for Pelosi’s assessment of the prospect of his impeachment, Trump continued his thoughts with, “but everyone must remember the minor fact that I never did anything wrong, the Economy and Unemployment are the best ever, Military and Vets are great – and many other successes! How do you impeach……..a man who is considered by many to be the President with the most successful first two years in history, especially when he has done nothing wrong and impeachment is for ‘high crimes and misdemeanors’?”

Trump Says He “Greatly Appreciates” Pelosi’s “Not Worth It” Impeachment Statement added on Wednesday, March 13, 2019