(Dec. 6, 2019) — A letter received on Friday from TDOC inmate Grenda Ray Harmer, #88710, alleges a scheme on the part of TDOC Commissioner Tony Parker to compel inmates to obtain mental-health counseling, whether or not they have been evaluated as requiring it, to enrich the prison service-provider, Corizon Health.

Several months ago Harmer was removed from solitary confinement, where he had spent more than 18 months due to threats against his person, and housed in the Morgan County Correctional Complex (MCCX) annex, where he reported a less-restrictive environment, an unpaid kitchen job which he enjoyed, and the possibility of being sent from there to a transition center.

Harmer is scheduled to be released on February 26, 2020, although that may be significantly delayed, Harmer has explained.  As the summer progressed, Harmer reported medical issues which he said were under-treated or untreated, causing him to experience increasing pain and excessive fatigue.

While his last letter, dated November 26, reflected that he has been scheduled for evaluation of some of his new medical challenges, he said that in accordance with a provision of Tennessee law, he will exercise his option to remain in TDOC custody until his recovery is complete.  According to the prison physician, Harmer said, his healing process could extend through November of next year.

The letter received today, bearing the same date as the former correspondence, was sent to Tennessee Gov. Bill Lee and copied to 21 parties, many of whom are Tennessee state legislators. It reiterates his complaint dating back to at least October that he has been “threatened” with expulsion from the annex should he fail to report for mental-health sessions.

In a letter about which The Post & Email reported on October 14, Harmer wrote that he “involuntarily” attended a mental-health “class” between June 10 and August 21 this year.

In the letter received Friday, Harmer wrote that all MCCX “mental health counselors” “are Corizon employees.  What I discovered is Commissioner Parker and Corizon officials are engaging in fraud.”

Continuing, Harmer wrote that on November 22, he “refused” to attend a mental-health session, after which “a security staff member was at my cell to see why I was not coming.”  He then described respective exchanges with two mental-health personnel in which he was required to tell each that he did not wish to participate in mental-health counseling.

In addition to Harmer, several other TDOC current and former inmates have reported involuntary enrollment in classes other than mental-health for which they did not qualify or which they clearly did not need.  An example is that of former inmate Walter Francis Fitzpatrick, III, who was placed in an Adult Basic Education class despite his having previously earned a bachelor’s degree and two master’s degrees following graduation from the U.S. Naval Academy.

Fitzpatrick, current inmate Jerome L. Johnson and Harmer have all reported that money is fueling the placements of inmates into classes for which they are unqualified or disqualified.

In his final paragraph, Harmer, who has been in Tennessee prisons for approximately a quarter-century, alleged that Parker “entered into a contract with Corizon that requires a specific amount of money for a specific number of offenders.”  Comparing the mental-health sessions to an alleged inmate-capacity arrangement with another Tennessee prison, SCCF, he wrote, “Regardless of how many offenders that Corizon MHC’s interviews the TDOC still has to pay the minimum amount.  For example, if the number of offenders for each prison is 200 and Corizon MHC’s only interview 100, the TDOC still has to pay for the 200.  That is why I’m forced to see Corizon MHC even though I refuse each time…”

He concluded the letter by asking Lee to investigate Parker and Corizon “and stop this fraud!” 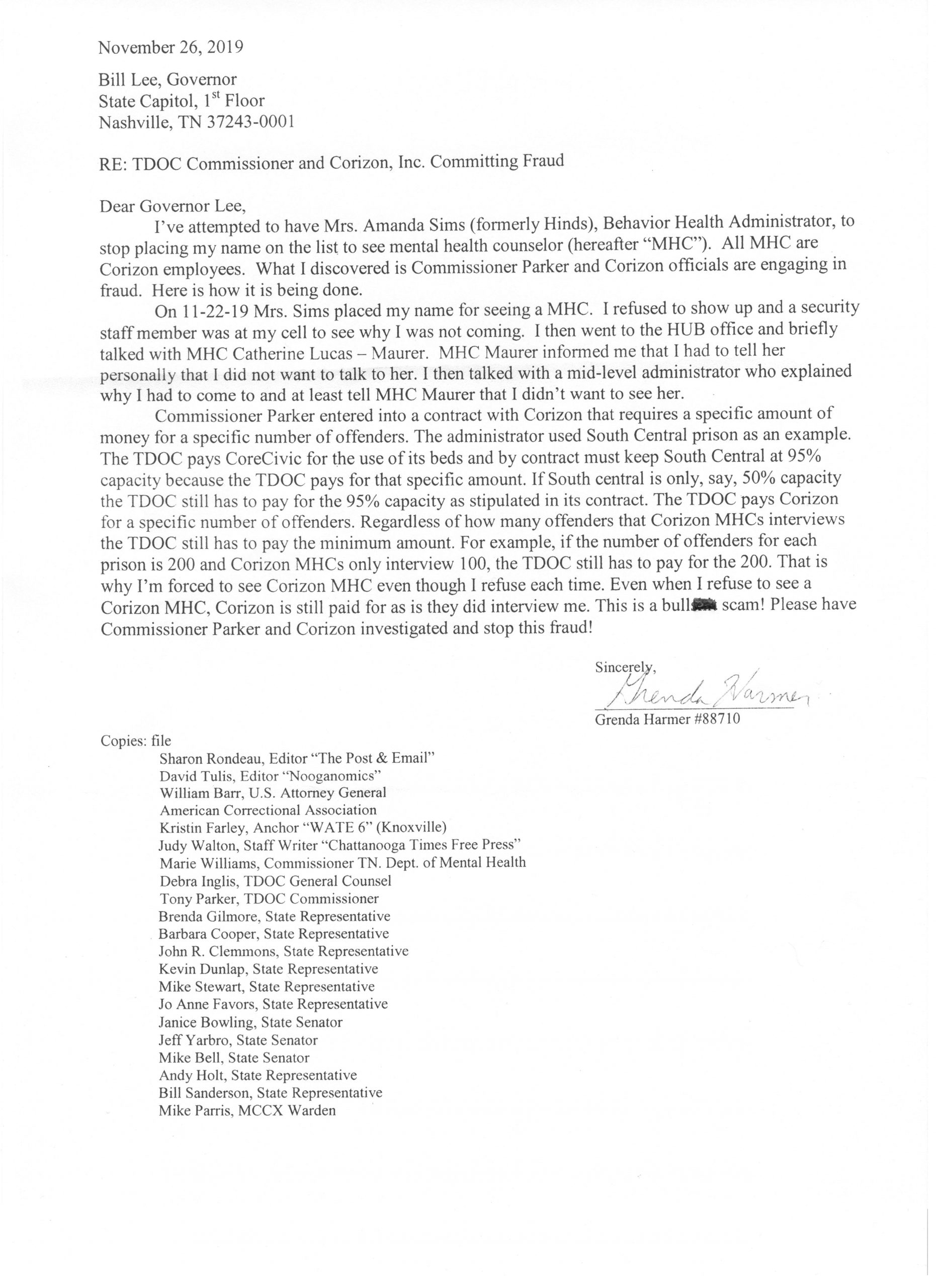 One Response to "Tennessee: Harmer Calls for Investigation into Alleged Prison Mental-Health-Services Fraud"