INMATE CHOOSES TO CONVALESCE UNDER CARE OF TDOC

(Nov. 26, 2019) — In a letter received Tuesday, 25-year TDOC inmate Grenda Ray Harmer, #88710, reported that he will likely remain in the custody of the Tennessee Department of Correction (TDOC) for another year because of medical conditions for which he just recently received approval for evaluation.

In his letter received Tuesday dated November 20, 2019, Harmer wrote that he saw prison physician Dr. Mock on November 19 and that the doctor “told me that I’ve been approved to go to Special Needs for consultation on my left knee.”

“Special Needs” refers to the Lois M. DeBerry Special Needs Facility in Nashville.  According to its TDOC entry, the medical center “provides a number of services for the Department to offenders with multiple and complex medial problems, including acute and convalescent health care, intensive mental health intervention, three skilled nursing units in the Health Center to provide care for offenders recovering from surgery or serious illness, housing for offenders whose treatment regimen is not manageable at other TDOC facilities, inmates with long-term medical needs, and a community hospital to provide inpatient and outpatient care for the offender population in a designated secure area.”

Harmer had previously had surgery on his right knee, and in recent letters described similar problems with the left knee. He has also had a right hip replacement and anticipates having the left hip similarly replaced in the future.

On Harmer’s TDOC online entry, his release date is stated as February 26, 2020.  He was ineligible for parole given that he was required to serve 100% of his 25-year sentence.

As Harmer reported over the summer, a subsection of Tennessee Code Annotated (TCA) 41-21-204 states that an inmate may choose to remain in medical custody while “sick” “until the inmate’s health is restored, except at the inmate’s request.“

Provision (b) of the statute provides that “The medical director shall conduct a daily outpatient clinic. Any inmate who is ill shall receive proper medical treatment.” 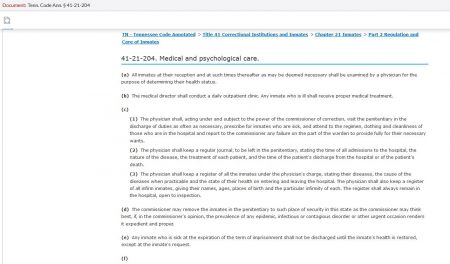 In a letter dated August 26, 2019 to Gov. Bill Lee, Harmer, citing the law, made the point that it would be “less costly” to the state’s taxpayers if his multiple medical issues were treated sooner rather than later.  To The Post & Email’s knowledge, Harmer received no response to his appeal to Lee for prompt medical treatment.

Tennessee: Harmer Likely to Remain in Custody Another Year added on Tuesday, November 26, 2019