SUGGESTS IMMEDIATE TREATMENT WOULD BE “LESS COSTLY” THAN EXTENDED STAY

(Sep. 1, 2019) — On Saturday The Post & Email received a copy of a letter from Tennessee inmate Grenda Ray Harmer, #88170, to Gov. Bill Lee stating that he will not consent to release by the Tennessee Department of Correction (TDOC) upon his scheduled release date if several existing medical problems are not resolved.

Harmer, 66, has been incarcerated in Tennessee for nearly 25 years for convictions on serious crimes without the possibility of early release.  Prior to his TDOC incarceration, he was a free man for a short time after serving time in the Indiana prison system.

In the past, Harmer has told The Post & Email that he suffers from pernicious anemia and has undergone a hip replacement.  In his most recent letter, he said he believes he is in need of a second hip replacement, that he is experiencing symptoms from his already-diagnosed degenerative joint disease (DJD) for which he takes medication, and that the anemia persists despite laboratory tests and a number of medical appointments over the summer.

As a result, Harmer said, he has the option to remain in TDOC custody in a medical treatment program past his release date, which is scheduled for five days after his 67th birthday.

In a letter to Mock dated June 11, 2019 following a May 21 appointment, Harmer restated his medical challenges and requested a response, then closed with, “What I find odd is that you asked me a question that raises a red flag .  You asked me, after examining me, when will I be getting out and I said that I was being released on February 26, 2020.  There is no medical reason why you would want to know when my release date was. So why did you ask me that question? Are you going to deal with the three medical issues above?…”

At the top of page 2, Harmer told Lee, “When my release date of February 26, 2020 comes around and my health issues have not been taken care of, understand this:  I WILL NOT ALLOW THE TDOC TO RELEASE ME.”

As justification for his position, Harmer correctly quoted TCA 41-21-204(e), which states, “Any inmate who is sick at the expiration of the term of imprisonment shall not be discharged until the inmate’s health is restored, except at the inmate’s request.” 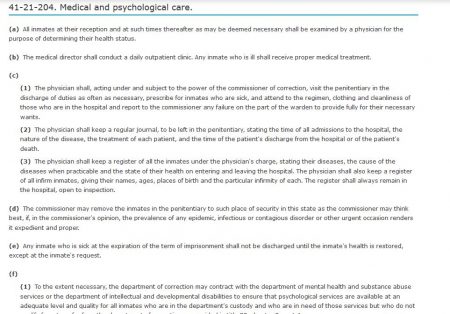 Resulting from his decision, Harmer said, would be the TDOC’s obligation to “feed me, clothe me, and maintain me until the TDOC decides to take care of my medical problems.  And that will costs the taxpayers thousands of dollars, unnecessarily.” [sic]

In closing his letter, Harmer wrote, “Save the taxpayers money and order Commissioner Tony Parker to have me permanently transferred to Special Needs and have all my medical issues solved. It’d be less costly.” 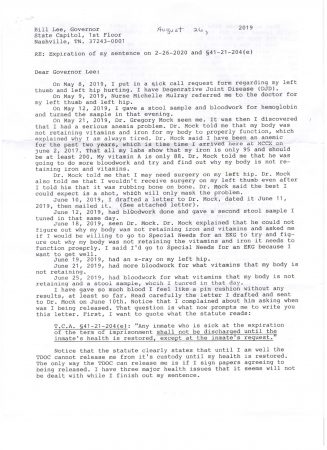 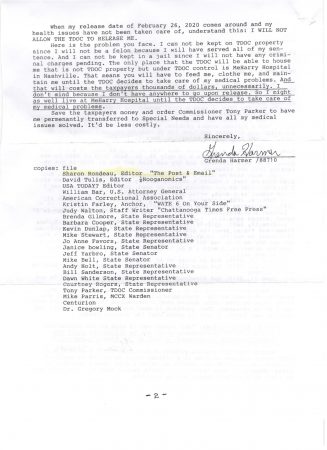 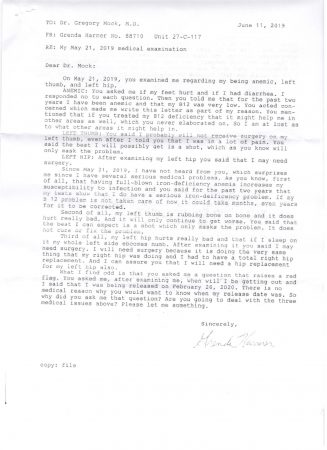