IS “MORE FUNDING” THE REASON? 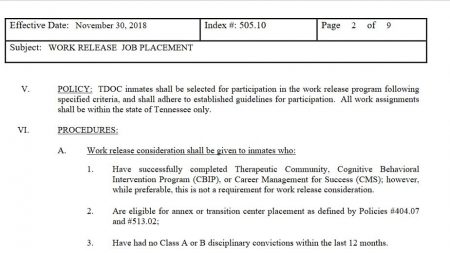 (Oct. 14, 2019) — Tennessee Department of Correction (TDOC) Grenda Ray Harmer, an inmate at the state’s Morgan County Correctional Complex (MCCX) who has communicated with The Post & Email for approximately three years, reported in an October 7, 2019 letter to Gov. Bill Lee that he was placed in a “mental health class” against his will over the summer with negative consequences threatened should he have failed to comply.

His missive went on to say that Counselor Michael McPeters told him “that I would be immediately sent back to the main compound for refusing to participate. I signed the papers under protest and continued stating I did not want to take CBIP.”

When Harmer was housed at the Trousdale Turner Correctional Center (TTCC) in 2016, he reported a similar occurrence in which he was enrolled in the Pro-Social Life Skills (PSLS) class designed for inmates whose crimes emanated from alcohol and/or drug-abuse issues with the stipulation that those enrolled be eligible for parole. As Harmer correctly pointed out, he was given a 25-year sentence by the State of Tennessee without the possibility of parole.

Former inmate Walter Francis Fitzpatrick, III and current inmate Jerome L. Johnson reported the same coercion at the Northwest Correctional Complex (NWCX) in Tiptonville, with Fitzpatrick claiming he was threatened with bodily harm should he refuse to participate in PSLS.  Johnson was given a “Class ‘A'” write-up for refusing to attend the class.

At this time last year, Harmer reported he was enrolled in a GED class despite his having earned his GED in December 1976.

Harmer is scheduled for release in February 2020 and stated in numerous letters earlier this year that he believes he is eligible for and in need of transition services in which he might be transferred to a transition center with the opportunity for a job in the community to prepare for his return to society.

In what appears to have been a concession from the TDOC and MCCX, in the spring Harmer was moved out of protective custody, where he had been placed due to a threat on his life by a gang member in July 2017, and moved to the Annex, where he reported greater freedom of movement, an unpaid job in the kitchen which he enjoyed, and better living conditions than in segregation.

“No matter how you slice it or dice it CBIP program is a mental health class,” Harmer wrote, including a footnote in which he said he asked Mental Health Administrator Amanda Hines in September to “stop placing my name on the list to see a mental health counselor or I would file a complaint against her with the Health Department.”

“MCCX Administration is forcing offenders to take CBIP because, according to one staff member, MCCX is receiving somewhere in the neighborhood between $1,500 and $2,200 per offender. The staff member would not provide me the exact amount, which I’m sure it is due to that it might identify that person,” Harmer wrote toward the bottom of page 1. Further, he said, “I did not get any benefit from CBIP because I’m not the type of person it was designed for.”

“…if an offender is at the Annex he does not want to return to the main compound. The TDOC is making it appear that there is a high number of offenders with mental health issues in order to increase it’s budget,” [sic] Harmer claimed.

At the top of page 2, Harmer referenced a September 30, 2019 letter he sent to Lee, a copy of which The Post & Email received, describing a rampant “drug problem” at the facility which he claims Warden Mike Parris is neglecting to address.  He alleged that the TDOC “does not care about helping offenders but only getting more funding.”

Concluding the letter, Harmer requested an investigation into his allegations and that Lee “stop the TDOC from forcing offenders to take mental health classes/programs like CBIP.” He also asked Lee to terminate Parker, a holdover from the Bill Haslam administration, and Parris “for encouraging/allowing this fraud to go on.”

The letter is copied to a bevy of Tennessee state representatives and senators, U.S. Attorney General William Barr, several media publications, Parris and Parker, along with a certificate showing he completed CBIP.

[Editor’s Note:  The “7” in the October 2019 date at the top of the letter did not scan, possibly because it was handwritten.] 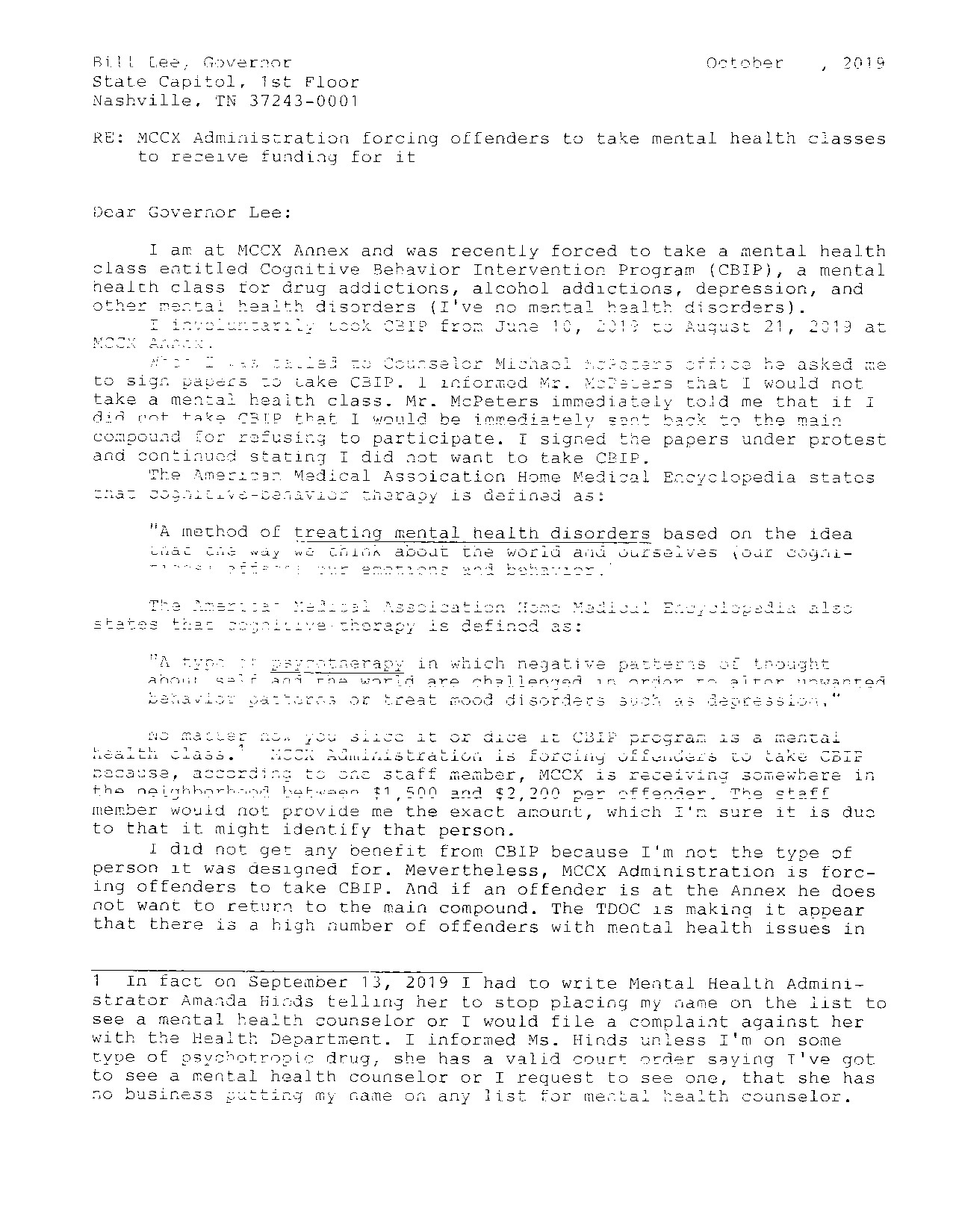 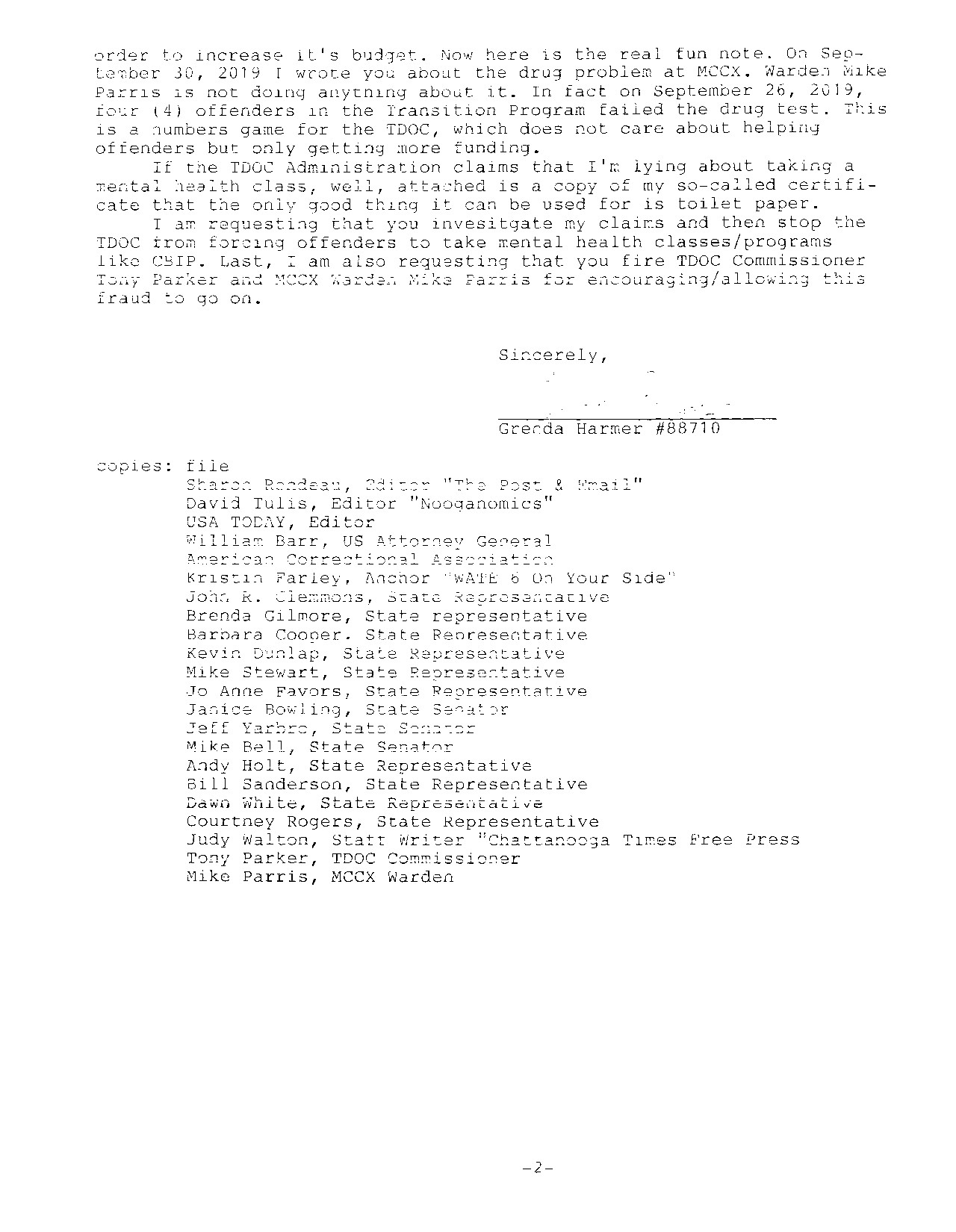 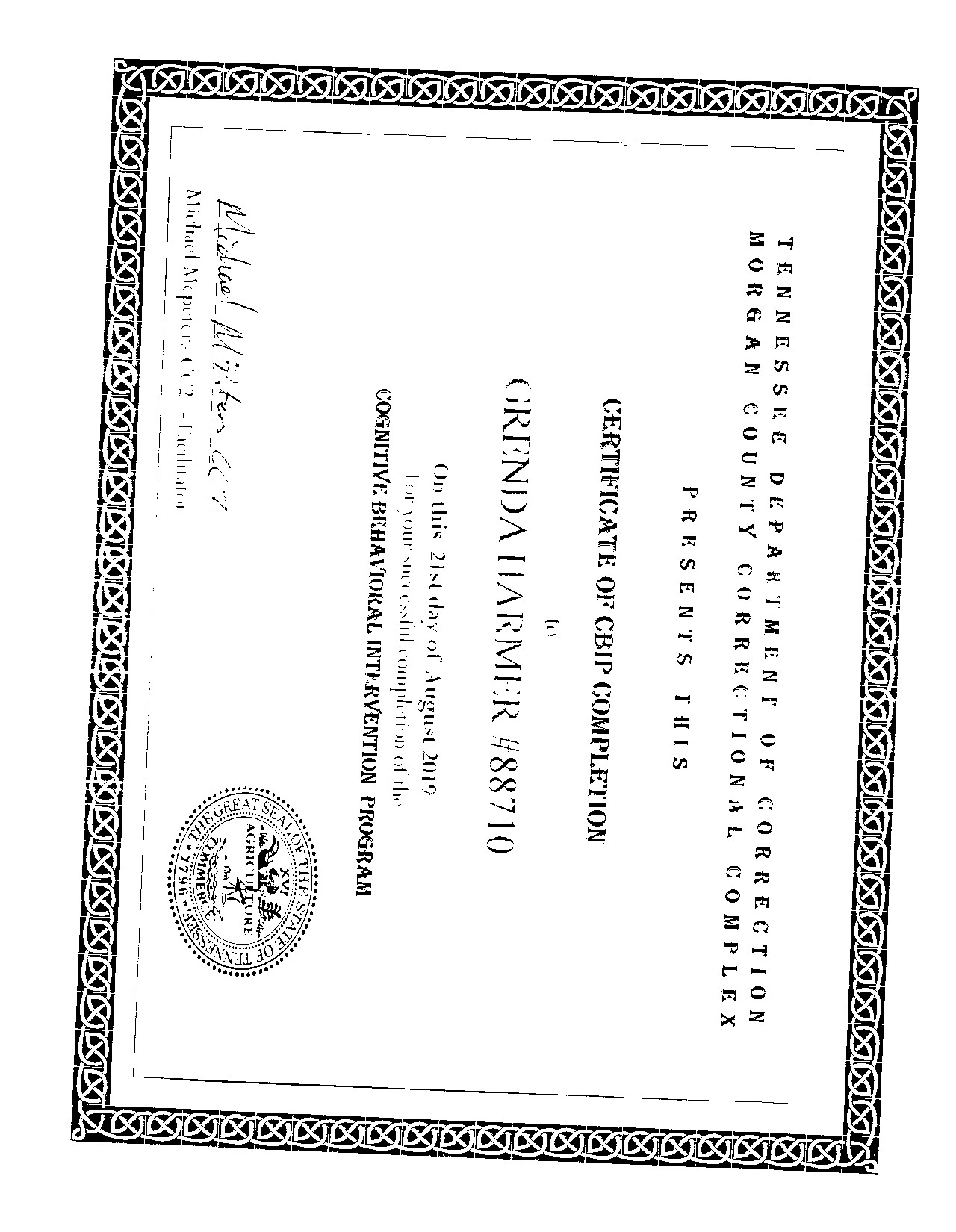