“WHO KNOWS WHAT TOMORROW HOLDS IN STORE?” 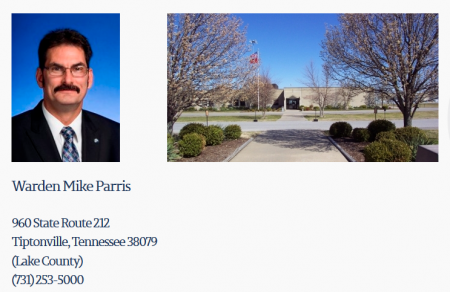 (Oct. 5, 2015) — On Friday, The Post & Email reported that an appeal to a disciplinary write-up filed by TDOC inmate Jerome Johnson to Commissioner Derrick Schofield was denied, with Schofield upholding Warden Mike Parris’s decision to enforce the discipline outlined in the report.

Johnson received the write-up as a result of his refusal to participate in the Pro-Social Life Skills (PSLS) class, which is aimed at drug and alcohol abusers and asks them to reflect on their criminal behavior in order to effect change.

In June, TDOC inmate Walter Francis Fitzpatrick, who is also housed at the Northwest Correctional Complex (NWCX), refused to participate in the same class, after which instructor Terry Hopper threatened to “beat you to the middle of next week.”  Fitzpatrick was not incarcerated for drug- or alcohol-related crimes and was told during his intake process last year that he did not qualify for any TDOC educational programs.

While staff attempted to force him into the class, Fitzpatrick reported that he had learned that each participant garners up to $3,000 from the federal government and that some inmates were taking the class for the third or fourth time.

Both men perceived that they would be forced to incriminate themselves by responding to the workbook exercises, which attempt to alter “criminal” behavior.  One of the workbooks used in the course is titled, “Criminal Lifestyles.”

Fitzpatrick filed a criminal complaint against Hopper and other staff members following the threat made against his person, but to The Post & Email’s knowledge, no action was ever taken by the prison against Hopper. A write-up was promised to Fitzpatrick for his refusal to enroll in the class but was not pursued.

As Johnson is black and Fitzpatrick is white, Johnson filed a federal Title VI complaint with the U.S. Department of Justice for racial discrimination and appealed the write-up to Parris and later to Schofield, both of whom rejected it.

Johnson is expecting a post-conviction hearing in the near future, and Fitzpatrick’s appeal, while rejected by the state appellate court in Knoxville, may yet be alive.

A week after the altercation between Hopper and Fitzpatrick, Fitzpatrick was moved out of the guild where the PSLS course is taught and enrolled in Adult Basic Education, which he did not need because he possesses a high school diploma, Bachelor’s degree, and Master’s degree.

Prison staff were unable to explain why Fitzpatrick was enrolled in a GED-preparatory class with his high level of education.  Fitzpatrick’s numerous requests to receive an exemption based on published criteria were stonewalled or ignored.  A purported release of information form to be sent to his high school to verify his graduation did not bear Fitzpatrick’s signature, and Fitzpatrick believes that the form was never sent out.

At some point in August, Fitzpatrick learned that he was released from ABE.

According to a letter received from Johnson last week, the prison librarian was instructed to allow Fitzpatrick, and no one else, to submit a Form 3586 declining to participate in the PSLS class.  A letter from another inmate indicated that a third party had been removed from ABE and placed in the PSLS course inappropriately, in the writer’s opinion, because the inmate so placed needed the education.

Fitzpatrick has described the PSLS course as a means by which the prison is bilking the federal government of tens of thousands of dollars each year.  In a letter dated 23 September 2015 received last week, Fitzpatrick wrote:

TDOC officials Ruth Long (Wicked Witch of the West – WWW) and Terry “Tank” Hopper took another run at me this afternoon between 1240 and 1248 hours local (12:40 to 12:48 p.m. CDT).  WWW Long called me to the Jobs Fffice to sign one of her computer generated forms accepting assignment into the Pro-Social Life Skills (PSLSP) a second time.

These people are treacherous!!  The PSLSP is running undisturbed like a well-oiled monotonous machine chewing up man after man to steal federal dollars.

On the heels of Derrick Schofield denial of Mr. Jerome Johnson’s appeal, and on the heels of the appellate courts ruling in my cause, [sic] Hopper and WWW Long took another run at me.

I demanded from WWW Long the form CR-3586 so as to decline program participation. She told me she didn’t have one. So I told long I was next heading to the library to obtain and administer the documents enclosed here.

Mr. Jerome Johnson attempted to have the same form negotiated this afternoon around 2:30 p.m. in the library. Jobs Coordinator (WWW) Ruth Long and PSLSP instructor Terry Hopper stepped in to block him.

So Jerome went elsewhere to get the CR-3586 administered – signed and countersigned.

Hopper and long blocked Jerome saying the Pro-Social Life Skills Program (PSLSP) is not – I say again – is not part of the “Therapeudic [sic] Community.”

See page 2 (two) of the Return to Life PSLSP “Behavioral Community Resident Orientation Pack” I sent to you back in (late May) early June (???)

Later in the same letter, Fitzpatrick wrote, “Execution of these instruments created quite a stir this afternoon. Who knows what tomorrow holds in store.”

The Post & Email has notified Tennessee Gov. Bill Haslam and four state senators about the “prisoners-for-profit” scheme at NWCX and received no response.

On Monday morning, The Post & Email received a brief letter from Fitzpatrick stating that on September 29, he was issued a “Class A” write-up after refusing to participate in the PSLS class on September 23, part of which is presented below, followed by the write-up. On Monday we also received two letters from Johnson describing the events as he saw them unfold, one of which follows: