WHY IS VIDEO/ARTICLE ON CONTROVERSIAL CONGRESSWOMAN SCRUBBED?

The article, published on July 24, brings to readers’ attention that the first-term congresswoman from Minnesota’s fifth district may have “usurped” her seat in Congress based what DeMaio described as “a growing body of evidence that not only is Omar not a ‘citizen’ of the United States, her claim that she is a citizen may be based on fraud and the filing of false documents.”

Over the summer, allegations arose that Omar married her biological brother in order to enable him to remain in the United States and that during the “marriage,” she filed tax returns indicating another man as her spouse. She eventually married the second man, several reports say.

After a complaint was filed by Minnesota State Rep. Steve Drazkowski (R-District 21B), the Minnesota Campaign Finance and Public Disclosure Board found that Omar “broke the law,” a June 6 press release posted on the Minnesota House of Representatives website under Drazkowski’s name states.

While speaking to reporters prior to a departure from the South Lawn, President Trump himself suggested that a federal investigation was in order, a fact little-reported by the mainstream media.

Also on Tuesday, a local online Minnesota outlet, Alpha News, reported that “More calls for charges against Congresswoman Ilhan Omar have been pushed forward by Representative Steve Drazkowski (R-Mazeppa), calling for district judges of Hennepin County to investigate Omar for committing perjury in a 2017 application for a default-divorce.”

The report is one of many which Alpha has published on Omar this year, including one in late June, when Drazkowski asked his congresswoman “to remove the security clearance from Congresswoman Ilhan Omar” and launch “an ethics investigation against her for numerous federal violations and state violations.”

In an article dated August 27, 2019, the Minneapolis Star Tribune reported, “In June, after Drazkowski made a complaint to a state board alleging Omar’s misuse of campaign contributions, the Minnesota Campaign and Public Disclosure Board revealed that she used campaign money for a tax lawyer to amend two years of tax returns.”

As a consequence, the article reported of Omar, “She was forced to amend the returns because she filed a joint return with a man who was not her legal husband. She has since divorced the man she was married to at the time. Drazkowski cites the work of conservative journalists who say the man she divorced was her brother, alleging they married for immigration purposes.”

Omar has denied the allegations, calling them “disgusting lies.”

The Washington Free Beacon, Powerline Blog, and Fox News’s Tucker Carlson, the latter to much criticism, have covered Omar’s developing story which prompted Judicial Watch several weeks ago to file an ethics complaint with the U.S. House of Representatives Office of Congressional Ethics, as DeMaio noted in his column.

A second group said Tuesday it plans to file an ethics complaint given public reports claiming that Omar is romantically involved with one of her political consultants.  On July 26, the Daily Mail reported, “Ilhan Omar SPLITS with her husband and moves into luxury penthouse as she heads for SECOND divorce with father of her three children.”

The consultant’s wife, Dr. Beth Mynett, has filed for divorce as a result of the alleged affair, The New York Post reported Tuesday.

DeMaio’s article largely referred to a video report posted by thirdrailtalk.com, which now redirects to a blog titled, “Political Islam” with a “Page Not Found” message and the url:  https://www.politicalislam.com/evidence-of-ilhan-omar-citizenship-fraud/?unapproved=19079&moderation-hash=e93d9de8c6053e9856e5c882ef9314de#comment-19079 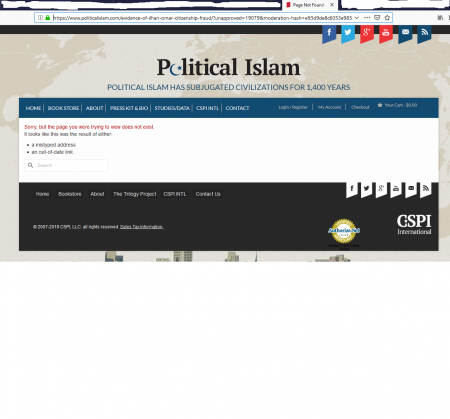 His discussion focused on whether or not Omar obtained “derivative” U.S. citizenship as a result of her father’s naturalization and that two different birth dates for Omar have been reported.  DeMaio, who has written extensively on the “natural born Citizen” issue regarding the U.S. presidency, further observed:

Perhaps Omar will post an image of her Somali birth certificate on the Internet, a tactic that has in the past been used by other usurp…. sorry…, politicians…, in an effort to “prove” their eligibility. Using her prior documented birthdate of 1981 would mean that she turned 18 in 1999 and 19 one year later, in 2000, rendering her ineligible for derivation citizenship.

DeMaio further suggested that a political challenger to Omar in 2020 would have “standing” to demand that Omar release documentation as to her birth date and citizenship status.  Thus far, no Democrat has registered to challenge her in the primary, although Danielle Stella and Lacy Johnson have filed the necessary documents to run against her in the general election.