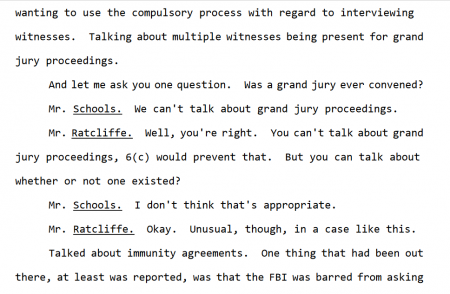 (May 23, 2019) — On December 21, 2017, then-FBI Deputy Director Andrew McCabe testified privately to members of the House Judiciary and Oversight & Government Reform Committees on the subject of the Bureau’s investigation into Hillary Clinton’s use of a private email server while she performed her duties as Secretary of State between 2009 and early 2013.

The probe, opened in 2015 and initially closed on July 5, 2016, sought to determine whether or not Clinton violated federal law with “intent” when she sent and/or received classified documents over the server, which did not possess customary governmental security protocols.

On October 28, 2016, then-FBI Director James Comey wrote a letter to 16 congressional committee chairmen and ranking members indicating that based on new information provided to the Bureau from a different investigation, the Clinton email probe was reopened.  Two days before the election, Comey reported to Congress that after reviewing thousands of emails found on the laptop computer of former Clinton aide Huma Abedin’s estranged husband, Anthony Weiner, the probe was again closed without action.

Many Democrats criticized Comey for his public notification of Congress, with some attributing Clinton’s loss of the election to that decision.  Others suggested Comey resign or that he had violated the Hatch Act.

The emails were discovered on October 3, 2016, by a New York FBI field office agent in the course of his investigation into Weiner for sending sexually-explicit material through email to an underage girl over state lines.  Weiner, a former seven-term congressman from New York’s ninth district, accepted a “guilty” plea in May 2017 and completed his prison sentence last week.

McCabe, who himself has a law degree, was accompanied to the interview by two lawyers:  “Mr. Schools” of the Justice Department and Trisha Anderson of the FBI.  Anderson, now employed at the mega-law firm Covington & Burling, was interviewed by congressional investigators last August.  On Monday the transcript from her testimony was released along with McCabe’s and others’ by House Judiciary Committee ranking member Doug Collins.

Dozens more transcripts from closed-door interviews from the Clinton and Trump-Russia “collusion” probes are expected to be released in the near future, according to several congressmen.

Three months after his deposition, McCabe was fired after Justice Department Inspector General Michael Horowitz determined he had not been honest during interviews focused on leaks from the Bureau to the media. Horowitz then referred McCabe for possible criminal prosecution to the U.S. Attorney for the District of Columbia.

Last September, The Washington Post reported that a grand jury had been convened to examine evidence in the case.

McCabe has denied the accusation and is suing the Justice Department for allegedly failing to identify the “policies and procedures” utilized in his termination.  His firing occurred “26 hours” before he was to take lifetime pension benefits, according to his attorney, David Snyder (p. 2), in the complaint.

During his testimony, McCabe stated that he made the administrative decision to remove then-Deputy Assistant Director of Counterintelligence Peter Strzok from the Special Counsel probe into allegations of “collusion” between the Trump campaign and Russia.  Initially relocated to the Human Resource Department, in August Strzok was terminated from the agency as a result of his having exchanged politically-charged text messages with his then FBI colleague and paramour, Lisa Page.  Some of the texts demonstrated particular animus toward Trump and expressed their mutual desire that he not become president.

Page was an FBI attorney specifically assigned to McCabe (p. 24 here); she resigned in May 2018 and provided closed-door testimony to some of the same committee members two months later.

During McCabe’s testimony, a text from August 8, 2015 between Page and Strzok was referenced several times.  The text reads:

I want to believe the path you threw out for consideration in Andy’s office that there’s no way he gets elected, but I’m afraid we can’t take that risk. It is like an insurance policy in the unlikely event you die before your 40.” (pp. 136, 142, 231).

The transcript from the closed-door testimony last October of former FBI General Counsel James Baker reveals Baker alleging that he was told of a number of “meetings” which took place involving McCabe, Page and then-Deputy Attorney General Rod Rosenstein between the day Comey was fired, May 9, 2017, and the day Rosenstein hired Mueller, May 17, 2017 (p. 131).

Also according to Baker, McCabe opened a second investigation into Trump on the basis that his firing of Comey constituted “obstruction of justice” (p. 132).

In March, Mueller’s team concluded its 22-month investigation, assumed from the FBI after Comey was fired, with the finding of insufficient evidence that anyone from the Trump campaign, or any American, conspired with Russia to impact the results of the election.

The conclusion prompted Attorney General William Barr to pledge an investigation into the origins of the “collusion” narrative by not only the Justice Department, but also on the part of U.S. Attorney for the District of Connecticut John Durham.

Durham has reportedly been at work on the project for a number of weeks and may have already convened a federal grand jury to hear evidence, according to Fox News Legal Analyst Gregg Jarrett last week.

Folded into Mueller’s inquiry by Rosenstein in a second “scope” memo dated August 2, 2017 was the task of determining whether or not Trump obstructed justice. On that point, the Mueller report indicated a declination to recommend criminal prosecution of the president but stated that the declination “does not exonerate him.”

Despite Mueller’s findings, congressional Democrats, particularly those in the House of Representatives, have subpoenaed Trump’s bank and accounting records from when he ran the Trump Organization and his tax returns from the IRS.

House Judiciary Committee Chairman Jerrold Nadler has subpoenaed a number of former Trump administration officials to testify; on Monday, former White House Counsel Don McGahn declined to appear.  Nadler also requested that Mueller testify “no later than May 23” but has since turned his attention to other individuals.

Nadler subpoenaed Barr to produce a full, unredacted version of the Mueller report by May 1, with Barr refusing to appear.

Certain sections would be redacted, Barr wrote in a summary letter two days after Mueller delivered the report to the Justice Department on March 22, to protect the confidentiality of grand-jury proceedings, investigational sources and methods, and “harm to an ongoing matter.”

Mueller utilized at least one grand jury to review evidence, hear testimony and issue indictments in the cases of the 37 individuals and entities who were ultimately charged as a result of his investigation. Of those, six of the individuals had been associated with the Trump campaign in some way.

The sixth, Roger Stone, is awaiting trial in the fall on the charge that he lied to Congress, an allegation he denies.

In his March 24 letter to congressional leaders, Barr cited “Federal Rule of Criminal Procedure 6(e)” which, he wrote, “imposes restrictions on the use and disclosure of information relating to ‘matter[s] occurring before [a] grand jury.'”

However, Nadler held a vote in committee which, on party lines, held Barr in contempt for failing to release an unredacted version of the report.  The Justice Department responded that it could not by law release the grand-jury material.

It is unclear when Speaker of the House Nancy Pelosi might hold a vote on the House floor to complete the process.

A recent ruling by the Court of Appeals for the District of Columbia Circuit reads states that the court concluded it does not have the “authority” to order that grand-jury documentation be released.

On page 160 of the McCabe transcript, former federal prosecutor and current Texas Congressman John Ratcliffe asked McCabe, in regard to the Clinton email investigation, “Was a grand jury ever convened?”

Before McCabe could respond, as McCabe did earlier in the session when the “grand jury” topic was raised generally, Mr. Schools said, “We can’t talk about grand jury proceedings.”

Ratcliffe agreed, then asked, “But you can talk about whether or not one existed?” to which Schools responded, “I don’t think that’s appropriate.”

Two members of Congress, both Republicans, who viewed a “less-redacted” version of the report Barr made available to 12 congressmen, told Politico on April 30 that in their view, the unredacted material “has no bearing on Mueller’s conclusions.”