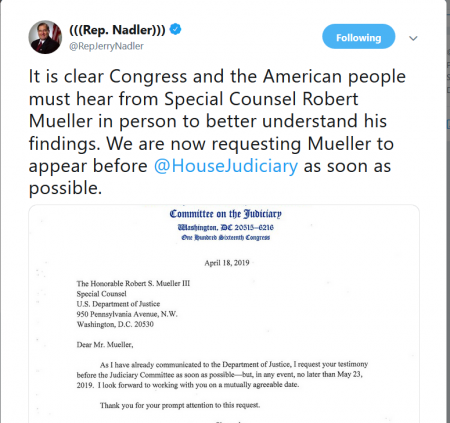 (Apr. 18, 2019) — Approximately 20 minutes after Attorney General William Barr concluded a Thursday morning press conference heralding the imminent publication of the work product of Special Counsel Robert Mueller over the last 22 months, House Judiciary Chairman Jerrold Nadler released a letter to Mueller requesting his testimony on Capitol Hill “as soon as possible” but “no later than May 23, 2019.”

“It is clear Congress and the American people must hear from Special Counsel Robert Mueller in person to better understand his findings,” Nadler tweeted. “We are now requesting Mueller to appear before @HouseJudiciary as soon as possible.”

During the presser, Barr responded to a reporter’s question as to whether or not he would object to Mueller’s testifying to Congress with “No, I don’t have any objection.”

Although Barr took questions from only a handful of journalists, at least two appeared to take the position that Barr was “protecting the president” in explaining his and Deputy Attorney General Rod Rosenstein’s findings that nothing in Trump’s actions both before and after he took office rose to the level of “obstruction of justice,” one of the issues Mueller was tasked with examining.

In his approximately-23-minute presser, Barr summarized the four-page letter he submitted on March 24 to the House and Senate Judiciary Committee chairmen and ranking members encapsulating Mueller’s conclusions that there was insufficient evidence to show that Trump attempted to obstruct justice and that “no Americans,” including any within the Trump campaign, collaborated with Russian operatives to affect the outcome of the 2016 election.

Mueller is said to have concluded, however, that Russian intelligence operatives attempted to influence Americans’ thinking in the months prior to the presidential election through disinformation campaigns, fake Twitter accounts, and other activity for which a grand jury in Washington, DC issued more than two dozen indictments.

While a number of Trump campaign aides and short-term campaign manager Paul Manafort were indicted on other crimes, none was accused of “colluding” or engaging in a conspiracy with Russians to win the election over Democrat Hillary Clinton.

On Thursday morning Barr said that Mueller’s investigation found that Russian operatives stole emails and other documentation from the Democrat National Committee (DNC) and Clinton campaign servers and supplied them to the government-transparency organization WikiLeaks. However, its founder, Julian Assange, who was arrested last Friday at the Ecuadorian Embassy in London, has repeatedly denied that he received the emails from any “state party,” including the Russian government.

Without mentioning Assange by name, Barr said that the publication of classified material by a journalist is not a crime unless the journalist participated in illegally obtaining it.  It is believed that the Justice Department is seeking Assange’s extradition to the United States on a grand-jury indictment alleging that Assange in 2010 assisted then-U.S. Army Sgt. Bradley Manning to crack the passcode of a classified military computer to obtain thousands of military and diplomatic cables.

Since the announcement that Mueller turned in his report to the Justice Department on March 22, many congressional Democrats have voiced dissatisfaction given that Mueller recommended no additional indictments and affirmed that none were outstanding. Nadler, in particular, was critical of Barr’s decision to schedule a press conference Thursday morning in advance of the release of the report.

Many Democrats and their constituents insist that despite the announced findings, Trump or someone in his organization “colluded.” 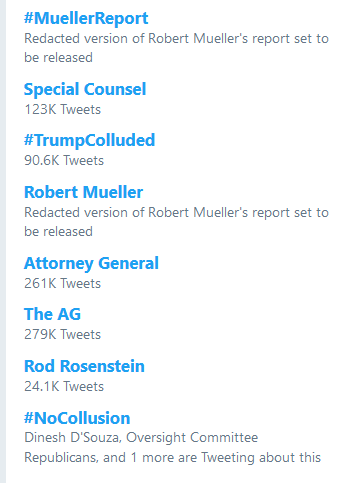 In light of the announced findings, investigative reporters John Solomon and Sara A. Carter have said they believe it is important for investigations to be opened into “the investigators” who alleged they were given actionable intelligence leading them to believe that someone from the Trump campaign was engaged in a conspiracy with Russians to tip the election in the former businessman’s favor. From there, as The Post & Email has reported, transcripts of two interviews with former FBI General Counsel James Baker demonstrate that the FBI brass at the time desired the appointment of a special counsel to probe Trump for obstruction of justice, particularly after he fired FBI director James Comey in May 2017.

In the transcript of his second interview last fall, Baker is noted to have said that he presumed Trump fired Comey in order to thwart the FBI’s investigation into possible “collusion.”  Like many of his former cohorts, Baker is no longer at the agency or employed by the federal government.

On Wednesday night’s “Hannity” show, Solomon declared, for the first time, that the Russia “collusion” investigation had its origins in the Obama White House in early January 2016, not July 31 of that year as the FBI has claimed. His statement agrees with those of former House Intelligence Committee chairman and now ranking member Devin Nunes, who has said publicly that the FBI’s probe into Trump campaign aides began in either “late 2015” or “early 2016.”

Nunes announced a year ago that he saw “no intelligence” contained in the electronic communication (EC) he was able to view in a classified setting at the Justice Department after many months of alleged stonewalling. Nunes has been highly critical of Rosenstein, although on Thursday morning, Barr praised the deputy attorney general for his helpfulness in preparing Mueller’s report for public release.

Redactions to the report were made, Barr told two congressional panels last week and reiterated on Thursday, to protect classified information, grand-jury testimony, and the reputations of those who were interviewed but not charged with a crime in keeping with federal statute.

One Response to "Unsatisfied, Nadler Requests Testimony from Mueller on “Collusion” Findings"