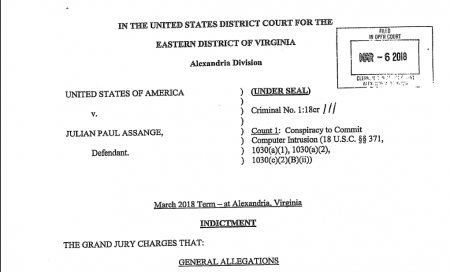 (Apr. 11, 2019) — On Thursday, WikiLeaks founder Julian Assange was forced out of London’s Ecuadorian embassy, which has served as his sanctuary for nearly seven years, and placed under arrest on a 2012 warrant.

Photos on Twitter show a bearded Assange, 47, being carried out of the embassy by at least four plain-clothed men said to be police officers.

The Guardian and the BBC are providing frequent updates on Assange’s case in which he appeared in court and pleaded “not guilty” to  a charge of “failing to surrender” to police on June 29, 2012.

A subsequent report states that Assange was “found guilty” of the charge.

According to The Daily Mail, the U.S. Justice Department wants to extradite Assange to the United States to face charges of “hacking” U.S. military documents provided by then-Sgt. Bradley Manning in 2010 published by WikiLeaks.

Manning is now known as “Chelsea.”  In 2013, Manning was sentenced to 35 years in prison for conviction by court-martial of violating the Espionage Act, which sentence was commuted to seven years’ time served by White House occupant Barack Obama three days before his successor, Donald Trump’s, inauguration.

Last month, Manning was again imprisoned after refusing to provide information to a grand jury impaneled in the Eastern District of Virginia about the documents provided to WikiLeaks, despite an offer of immunity, according to CNN.

A press release from the Justice Department Thursday states, in part:

Julian P. Assange, 47, the founder of WikiLeaks, was arrested today in the United Kingdom pursuant to the U.S./UK Extradition Treaty, in connection with a federal charge of conspiracy to commit computer intrusion for agreeing to break a password to a classified U.S. government computer.

According to court documents unsealed today, the charge relates to Assange’s alleged role in one of the largest compromises of classified information in the history of the United States.

The indictment alleges that in March 2010, Assange engaged in a conspiracy with Chelsea Manning, a former intelligence analyst in the U.S. Army, to assist Manning in cracking a password stored on U.S. Department of Defense computers connected to the Secret Internet Protocol Network (SIPRNet), a U.S. government network used for classified documents and communications. Manning, who had access to the computers in connection with her duties as an intelligence analyst, was using the computers to download classified records to transmit to WikiLeaks. Cracking the password would have allowed Manning to log on to the computers under a username that did not belong to her. Such a deceptive measure would have made it more difficult for investigators to determine the source of the illegal disclosures.

During the conspiracy, Manning and Assange engaged in real-time discussions regarding Manning’s transmission of classified records to Assange. The discussions also reflect Assange actively encouraging Manning to provide more information. During an exchange, Manning told Assange that “after this upload, that’s all I really have got left.” To which Assange replied, “curious eyes never run dry in my experience.”

Assange is charged with conspiracy to commit computer intrusion and is presumed innocent unless and until proven guilty beyond a reasonable doubt. If convicted, he faces a maximum penalty of five years in prison. Actual sentences for federal crimes are typically less than the maximum penalties. A federal district court judge will determine any sentence after taking into account the U.S. Sentencing Guidelines and other statutory factors.

The release states that the “Department of Justice’s Office of International Affairs” will extradite Assange, although a report suggests he might be jailed for up to a year in the UK for jumping bail.

A grand jury indictment from the U.S. Attorney’s office for the Eastern District of Virginia, whose contents were leaked last year, claims:

Page 5 of the seven-page indictment alleges Assange took part in a “conspiracy” to “collaborate on the acquisition and dissemination of” classified documents Manning agreed to provide.

It was reported that more than a year ago that Assange was suddenly prohibited from communicating with the outside world by telephone, Internet, or through visitors to the embassy.  Previous to Thursday’s arrest, Ecuador was reportedly considering granting citizenship to Assange.

In a statement on Thursday, Ecuadorian foreign minister Foreign Minister Jose Valencia said that “Assange’s Ecuadorean citizenship was suspended on Wednesday,” according to Reuters.  Ecuador’s Interior Minister, Maria Paula Romo, reportedly claimed that “Assange and WikiLeaks have intervened in Ecuadorean affairs and people close to him, including two Russian hackers, are living in Ecuador.”

The Guardian has published a timeline of Assange’s saga beginning on August 31, 2010, when he was questioned by Swedish authorities on sexual-assault charges.  The outstanding Swedish warrant for Assange’s extradition to that country was abandoned in May 2017.

On April 4, WikiLeaks reported that Assange would be ousted from the embassy in a matter of “hours to days.”