“IN HOURS TO DAYS” 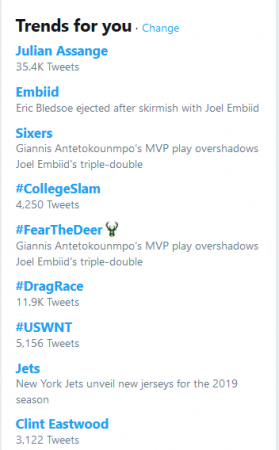 (Apr. 4, 2019) — Late Thursday night, the government-transparency organization WikiLeaks reported that its controversial founder, Julian Assange, is to be expelled from the Ecuadorian embassy in London where he has found refuge since 2012 after jumping bail on a UK warrant.

Assange was also wanted in Sweden for questioning in a sexual assault case which was ultimately dismissed.  He sought political asylum in 2012, fearing that he would be extradited to the United States, where Barack Obama’s Justice Department reportedly empaneled a grand jury which issued indictments against him for publishing classified material supplied by former Army Sgt. Bradley Manning, now known as Chelsea Manning.

Manning is currently in a federal prison after having refused to testify to a grand jury in the case involving Assange.

On March 25 and 26, WikiLeaks reported that Ecuadorian president Lenin Moreno Garcés came under investigation by that country’s congress as a result of the leaking of electronic documentation known as the “INA Papers.”

Approximately a year ago, Assange’s internet and phone connections were reportedly discontinued.  In December, the UK Independent reported that an attorney for Assange rejected an arrangement whereby the beleaguered journalist could leave the embassy with the assurance that he “would not be extradited to any country with the death penalty.”

Over WikiLeaks’ 12+-year history, the organization has published thousands of pages of government documents from nations around the world, including leaked CIA cyber-technology.  Other leaks encompassed emails from the Democratic National Committee (DNC) and the account of  2016 Democratic presidential candidate Hillary Clinton’s campaign manager, John Podesta.

Many Democrats attribute Clinton’s loss to Donald Trump to the publication of the emails, which showed that Clinton’s Democratic primary opponent, Bernie Sanders, was marginalized by the DNC and that the Clinton campaign coordinated news coverage with certain left-leaning journalists willing to be compromised.

Over the years of his exile, Assange has rarely been seen outdoors and has been intermittently reported to be in poor health.

According to multiple reports Thursday night, Assange will face expulsion from the embassy “in hours to days.”

As word of WikiLeaks’ report spread, “Julian Assange” rocketed to the top position on Twitter.