“Some People Did Something”; Oh, Really? (RR)

WHAT HAS “HATE” WROUGHT?

(Apr. 11, 2019) — “Good evening, ladies and gentlemen, and welcome to ‘The Pulse of the Nation,’ your show that you, the viewer, makes possible by buying the junk that our advertisers try and make you believe you can’t live without, i.e., ‘love,’ when in reality you’re buying the privilege of shelling-out for a gallon of gas and a quart of oil at exorbitant prices; or maybe finding happiness at the bottom of a bottle of beer and will forever be young and healthy with never a worry about having a plane hijacked and flown into a building and die in a mangled and burning manner.”

“Excellent opening, Roving; mind if I use it for the opening paragraph for the screenplay the General and I are collaborating on, ‘The Dandelion Wars’?”

“Be my guest, Professor Zorkophsky, and it’s great to be back in your comfortable office here at the university. In order to fill in the viewers as to why we’re here, let me say that we’re responding to your invite to discuss the mental wackiness of the Muslim women in Congress, specifically Ilhan Omar. Let me ask you, if I may: is the phrase ‘mental wackiness’ an acceptable psychiatric term?”

“By all means, Roving, and it has an awfully long history of describing, in a very concise and accurate manner, how very out-to-lunch some of us are. And, Roving, please address me as ‘Zork’; after all, there’s no need to be so formal in my humble office. Let me show you the stalls I’ve had installed in the equestrian facility that once comprised the south end of this building. I’d especially like your response on the retractable roof.”

“Maybe some other time, Zork. Let’s get down to the subject at hand: the Democrats are stuck with a dimwit, nitwit and just your plain regular twit in the likes of Ilhan Omar, who is a rabid anti-Semite, anti-Constitutionalist and, antidotally, really dumb, to boot.” 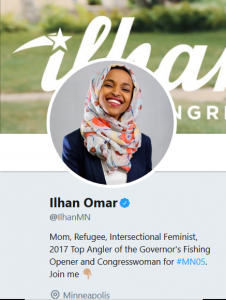 “You nailed it, Roving: what are the Democrats going to do with her? Here’s my take on it: the Democrats have been groomed for the last 50 years to get Christianity off the grid: first it was banning nativity scenes in front of City Hall; then praying before a high school football game; then praying in school and banning Passion Plays. The godless Democrats want to wipe Christianity off the face of the map. And as far as Ilhan Omar goes, she’s the Longinus – the Roman guard who pierced Jesus’s side during his crucifixion – of our time, but instead of using the barb of an actual spear she uses vocabulary barbs in expressing her ignorance, stupidity and hate.”

“Well, that’s not surprising: she is, after all, a Muslim.”

“So she’s acting, speaking, verbatim, by rote, mind you, what’s she’s been taught; what she knows and, mind you, what all the other Muslims know: 9-11 was a day of celebration because ‘somebody did something,’ and that’s as far as it goes.”

“Worse, believe it or not. Look, while we are focusing on the Deep State going after Trump, CAIR* is keeping to its timeline in shoving Sharia Law down our throats.”

“How do you figure that?”

“Well, Roving, for one they’re still here, aren’t they? CAIR is still operating openly within our borders, which is completely nuts.”

“And for two, most Americans still think that Islam is a religion.”

“So if Islam is not a religion, what is it?”

“Islam is a Totalitarian form of government that rules by Draconian methods (such as sleep deprivation, Sharia-compliant police) and denying half the population – women – the same lawful rights as men, which reduces the brain trust by half, which means that the followers of Islam will be forever on the back burner of human evolution: the males regulated to carrying big sticks in order to subdue females, or else go to London or Fort Lauderdale and hang out at gentlemen’s clubs.”

“Well-said, Zork. By the way, how’s that screenplay coming along?”

“So, how about capsulizing that phrase, ‘Some people did something’?”

“Ever hear the saying, ‘born of ignorance?’”

“That it does and we’re out of time and so, on behalf of the crew, I’ll be wishing you all a goodnight: Goodnight.

[*CAIR: needs to be ruled a terrorist organization and kicked out of our country.]