BUT WHAT ABOUT REGULATIONS PRECLUDING IT? 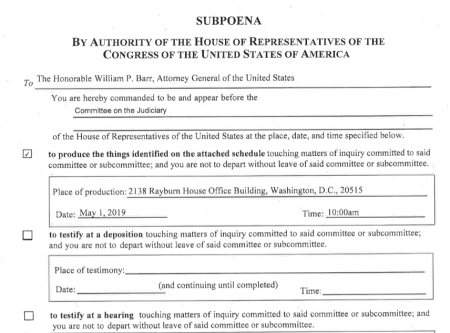 (Apr. 19, 2019) — As of 9:10 AM EDT Friday, House Judiciary Chairman Jerrold Nadler issued a subpoena to Attorney General William Barr to appear before the committee on May 1 to produce the underlying documents relied upon by Special Counsel Robert Mueller to produce his report as to Russian interference in the 2016 presidential election and any “collusion” which might have taken place between the Trump campaign and the Kremlin.

Although dated Thursday, Nadler’s subpoena was made public on Friday.

During a 9:30 AM press conference on Thursday, Barr said that he had “no objection” to Mueller testifying to Congress, and previously Barr had agreed to testify in early May.

Directly after the presser, Nadler sent a letter to Mueller asking that he appear before the committee “as soon as possible” but “no later than May 23, 2019.”

Democrats, who as the majority now head all committees in the U.S. House of Representatives, are by and large dissatisfied with Barr’s summary letter, produced on March 24, of Mueller’s findings as well as his statements during Thursday’s press conference. Some accused Barr of “protecting” or “being generous to the president” in his explanation of Trump’s purported reactions to the Mueller investigation, which former FBI director James Comey had told Trump early in 2017 did not focus on him personally.

On May 9, 2017, Trump fired Comey on the premise that Comey mishandled the Clinton private server investigation, which the Mueller report suggests was a false predicate for Trump’s decision. In transcripts released over the last several weeks by House Judiciary Committee ranking member Doug Collins (R-GA), former top FBI officials are noted to have said that Comey’s firing ignited their desire for the assignment of a special prosecutor, which occurred nine days afterward by Deputy Attorney General Rod Rosenstein.

On the second day of his close-door testimony to members of two congressional committees, former FBI General Counsel James Baker admitted that “obstruction of justice” has been discussed in some circles even before Trump fired Comey.

While Rosenstein has been painted as having participated in discussions aimed at removing the president from office in which Baker said he took part, he stood stoically and silently behind Barr on Thursday morning as Barr offered a prelude to the 448-page report released to the public approximately 90 minutes later.

By the Federal Rules of Criminal Procedure and congressional statute, grand-jury testimony and other classified information is not releasable to the public, and, as Barr noted during the presser, the statute governing the work of a special counsel states that his or her report to the Attorney General is “confidential.”

In his March 24 summary, Barr had said that he and Mueller would be going through the report to redact material necessary to protect investigative sources and methods and grand-jury documentation.

One organization has already sued for the underlying materials Nadler is seeking.

Apparently angry that Mueller found no evidence of a Trump-Russia conspiracy to win the election, Democrats have now turned to Mueller’s open-ended conclusion as to whether or not Trump obstructed justice. Nadler has said that the task of determining whether or not obstruction was committed is now up to Congress.

The regulations governing the hiring of a special counsel can be viewed here.