“DIDN’T HAVE TIME TO THINK ABOUT IT” 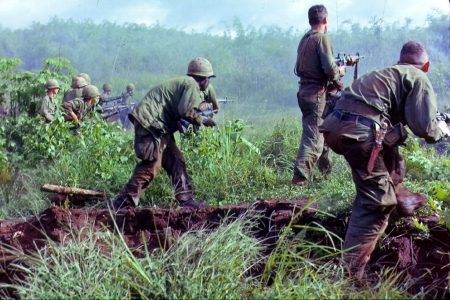 (May 22, 2019) — “Good evening, ladies and gentlemen, and welcome to the show that just lays it out for all to see and for all to decide: ‘The Pulse of the Nation.’ Hello, my name is Roving, as in Roving Reporter (RR), and I’m usually the host for this show which is usually brought to you from the corner, under the awning, across the street from the train depot in one of the suburbs of our fine city.  Maybe I should say what ‘used to be our fine city,’ and it was, that is, until the Democrats stole from it all that they could take. Excuse me; I digress and, by doing so, just violated a new policy of the station: leave the politics at home. Fair enough, so what do you say we give it a try? Excuse me, Miss, care to be interviewed on live TV? Roving here for ‘Pulse,’ the informative-yet-entertaining show that’s free of politics. So, what’s your name and where are you off to on this fine spring day?”

“My name is Ida and I watch your show with all of your ‘de facto’ this and ‘WHERE’S THE BIRTH CERTIFICATE?’ that, and in every show you have your anti-illegal immigrant and Muslim rants.”

“Well, Ida, we just report the truth, I mean, if we sugarcoated it and twisted the facts to suit some Left-Wing Looney-Tunes, then we wouldn’t be doing our job, now, would we? Like how does one ignore the Beslan school massacre or weekly bus bombings in Israel?”

“But that was years ago.”

“And if the gates were wide open it would start all over again in a heartbeat, wouldn’t it? The Muslims hate the Jews and the Christians just as much today as they did a thousand years ago or just a thousand days ago: talk about extermination, they were a whole millennia ahead of Hitler and Pol Pot.”

“Well, it sounds to me that you’re talking politics, is all I’m saying. And didn’t you just say that you weren’t supposed to do that anymore, talk politics?”

“Look, Ida, I served with honor in our military and I took every order as a suggestion, okay? They would give me an order, and if I decided that if it was within the framework of the United States Constitution and it wasn’t a suicide mission, then I would consider it and weigh the possibilities.”

“Well, like in Boot Camp, the DI would give a suggestion to form-up on the grinder to do calisthenics. I’d ask myself, ‘What’s in it for me?’ I’d come to the conclusion that it was in my and my country’s best interest that I’d comply and do the 96-count to the best of my ability.”

“It’s a form of torture by using your piece – rifle – to do exercises, like sweeps and holding the rifle out in front of you for long periods of time.”

“Re-Socialization: gets you in the mindset to follow orders, which is a good thing, or at least I thought so until I found myself in Vietnam, or Laos, or Cambodia. I never did find out where I was, precisely speaking, but there’s a name for being in such a situation that the censors won’t allow me to say on TV.”

“So are you saying that you disobeyed a direct order from a superior officer, is that what you’re saying? Isn’t that insubordination or mutiny or something like that?”

“Not ‘something like that’: exactly like that. But the day was saved and everyone who wasn’t killed at the start of it all made it back, safe and sound, although some were wounded and, little did I know at the time, so was I.”

“Because you got court-martialed?”

“No, they swept the whole incident under the rug. No, I’m talking about the PTSD aspect.”

“It must’ve been pretty scary.”

“Didn’t have time to think about it: it was either do it or wait for someone else to control the destiny of myself and a few other guys, which is why I go absolutely bananas when I hear that commercial on television where the father says, ‘Be careful, Son.’”

“What’s wrong with saying ‘Be careful?’ It sounds like a nice thing to wish upon another.”

“Well, now, let’s think about it, okay? So you’re sitting in some kind of flying machine or some kind of vehicle that you were ordered to, let’s say, ‘partake in the adventure.’ If it’s not Vietnam then it’s Afghanistan or some other godforsaken place far from home. Anyway, it’s not like you have a choice to be careful or not.”

“I’m not following you.”

“Okay, let’s say they send you out on a patrol. Maybe you’re a pilot, maybe you’re a driver of a tank or a supply truck, maybe you drive a medical supply van, and you’re not careful; what then? Would it change the outcome if you were to take the exact same route and you just happen to decide, okay, this is the time in my life I’m going to be extra-extra really careful. But listen: careful OR NOT, you’re STILL in the exact same crosshairs of the Grim Maimer or the Grim Reaper, get it?”

“Those dudes who come back in a body bag or missing limbs were extra-extra really careful, trust me, and look what happened to them.”

“So there’s no such thing as being careful?”

“I didn’t say that: what I said was that to tell someone going off to war, going off to where they’re going to be in dangerous waters, ‘to be careful’ is 1) a colossal waste of time; 2) totally meaningless to the point of, like, they have a choice to reduce the very real danger as if avoiding a grocery cart from hitting their car and: 3) minimizing the gravity of giving up all possible control of one’s existence to the random actions of the universe, specifically bullets and shrapnel flying through the air: that no matter how careful a person is or isn’t has no bearing on the outcome.”

“Absolutely. Totally. I’ll tell you this: whoever wrote that commercial never saw combat, that’s for sure; ‘Be careful,’ my foot.”

“Thanks for taking the time talking with us, Ida. And speaking of time, it’s that time when, on behalf of the crew, I’ll be wishing you all a goodnight: Goodnight.