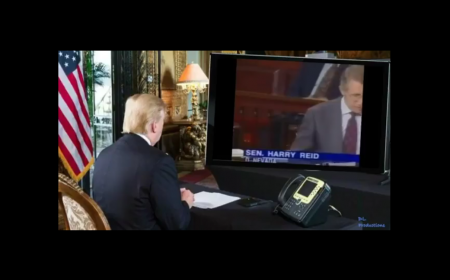 The attachment is a video recording of every Democrat Party leader over the last 40 years  expressing their opposition to illegal immigration, except for Nancy Pelosi, who is a proponent for open borders and promotes the entry of illegal aliens.

We recommend you share the attachment with those in your address book who oppose the entry each week of over 15,000 illegal aliens from 23 countries, who are now invading the United States through the wide-open southern border.  They are now entering in organized caravans; there is a 12,000-migrant caravan en route to the United States now. The organizers are aware that the Democrats in Congress are preventing President Trump from securing the southern border.

Entrants include MS-13 gang members, drug smugglers, radical Islamic terrorists, white slavers, convicted criminal illegal aliens who were released from U.S. prisons.  The smugglers bring with them the scourge of opioids that are killing 300 mostly young Americans each week—more Americans are dying each day from opioids than from breast cancer.

The migrant caravan (consisting mostly of men) invasions in November and December 2018 were not spontaneous; they were highly-organized; their goal was to “degrade US Security.”   They were organized by multiple UN agencies, numerous “open borders” organizations, CAIR, MECHA, the American Friends Services Committee (a Quaker group that has had ties to the Communist Party since the 1920s), and Chicago-based organizations founded by left-wing activists, Emma Lozano—Pueblo Sin Fronteras, La Familia Latino Unida, and Centro Sin Fronteras Community Services Network.

The illegal aliens are entering the United States in violation of U.S. federal immigration laws that at one time were enforced, requiring a 90-day quarantines of immigrants who public health doctors suspected had communicable diseases.  If they determined any immigrants had a communicable disease and that there would be a danger of spreading it to the general population, that immigrant was returned to his country of origin.

The Center For Disease Control and Prevention (CDC) cautioned that Americans are now being exposed to highly contagious diseases that had previously been eradicated, because over 15,000 illegal aliens entering the U.S. each week are no longer being quarantined to detect communicable diseases.  The infections of illegal aliens are responsible for the reemergence of smallpox, mumps, polio, tuberculosis, lice, leprosy, scabies, diphtheria, staph infections, etc. that are now being detected in the general population.   Illegal aliens are infecting both U.S. Border Patrol agents who have contact with them and grammar school children in public schools who are required to be in class with the children of illegal aliens, who for the most part cannot even speak English.

The U.S. House of Representatives and the U.S. Senate have the solemn obligation to protect American citizens from the out-of-control invasion at the wide-open southern border, especially by radical Islamic terrorists, drug smugglers, criminal convicted illegal aliens, MS-13 gang members, and white slavers who regularly rape the young girls they are bringing into the United States each week.

In November 2018, 62,000 illegal aliens were interdicted coming across the border, and in December 2018, that number rose to over 70,000, a 78 percent increase over the same period last year; most likely, two-thirds that number each month were not interdicted and entered illegally.

Previously Recorded Opposition to Illegal Immigration by the Leaders of The Democrat Party added on Wednesday, January 30, 2019