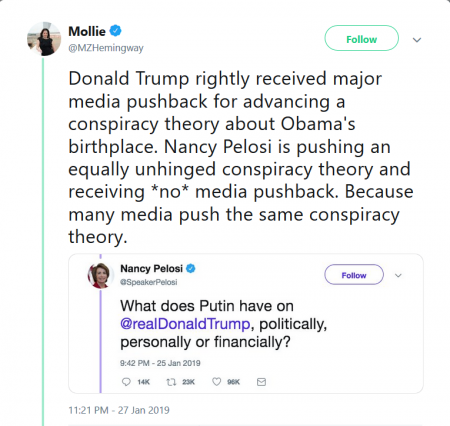 Hemingway is senior editor at The Federalist and a frequent media commentator.  Her tweet generated a number of responses about “conspiracy theories” and Pelosi, among others.

One Twitter user wrote, “Still wonder why Obama’s birth certificate is sealed? and why both him and his wife were disbarred from being lawyers?” which generated the response of “You realize bar admissions are public record right?”

In early 2011, Trump openly raised the question of Barack Hussein Obama’s presidential eligibility amid criticism that he had not released his “long-form” birth certificate proving his birth in the United States.

Beginning in 2007 when Obama announced his presidential bid, many Americans questioned his eligibility as a result of mainstream reports stating he was born in Kenya or Indonesia and not Hawaii, as he later claimed.

As Trump considered a run for the presidency himself, he challenged the White House to release Obama’s detailed birth certificate, stressing that if Obama was born outside of the United States, he was ineligible to serve because of the U.S. Constitution’s requirement that the chief executive be a “natural born Citizen.”

In June 2008, the Obama campaign released what it said was Obama’s “birth certificate” known as the “short-form,” claiming it was produced by the Hawaii Department of Health (HDOH) and the only birth record publicly available.  Shortly after its release, a number of graphics experts declared it a forgery.

On April 27, 2011, in apparent response to Trump’s public demands, the White House released what it said was a scan of a certified copy of Obama’s “long-form” birth certificate to considerable media fanfare. However, within hours, the image was deemed a hastily-crafted forgery, a claim later supported by a 5+-year criminal investigation carried out under the authority of the Maricopa County Sheriff’s Office (MCSO).

On March 1, 2012, lead investigator Mike Zullo, a former detective, announced that probable cause existed to believe the image is a “computer-generated forgery.”  Zullo’s team additionally found Obama’s Selective Service registration form to be fraudulent, Zullo reported at the presser.  The FBI and the media refused to investigate the findings.

In an apparent effort to deflect from the crimes Zullo was uncovering during the investigation, the media created the moniker of “birther” to ridicule anyone questioning Obama’s public birth narrative.  The term has persisted in the public lexicon and often accompanied by the adjective “racist.”

More recently, the term has been applied to those questioning whether or not Sen. Ted Cruz, Sen. Marco Rubio, and more recently, Sen. Kamala Harris, are eligible to the presidency given their individual birth narratives.

Cruz was born in Canada to a Cuban-citizen father and presumed U.S.-citizen mother, while Rubio and Harris, both born in the United States, were nevertheless children of legal immigrants who had not acquired U.S. citizenship.

Harris declared herself a presidential candidate on January 21 and officially opened her campaign Sunday with a rally in Oakland, CA, where she was born on October 20, 1964. In her initial remarks to her supporters, Harris pointed out that she was born not far from where she stood and that both of her parents, her mother from India and her father from Jamaica, were active in the American civil rights movement.

As she has on her Senate and presidential campaign websites, Harris gave the impression that she and her sister were raised in Oakland, while in actuality, at age 7 following her parents’ divorce, Harris and her sister left the country with their mother to live in Canada.

In 2008, Obama’s wife Michelle described Kenya as her husband’s “home country.”  However, in a book published in November, she directed anger at Trump for “the ‘xenophobic’ claims that her husband, former President Obama, was not actually born in America,” The Hill reported, using the term “birther.”

Since Obama left office, many left-leaning commentators have invoked Trump’s “birther” statements dating back to 2011.  Hemingway’s tweet is a departure from that trend, as she is solidly on the political right.  To date, no one in the major media has discussed the conclusions Zullo announced in December 2016, when he said in a final press conference that two forensic analysts hired to analyze the long-form image concurred with his conclusions that it could not have originated with a real, paper document.

Zullo has declared Obama’s life narrative “phony,” bolstered by the claim of an “open secret” two U.S. intelligence agents related to him that Obama was not born in the United States and is therefore ineligible to have served as president.

Last summer, Obama described himself as “from Kenya.”

In multiple interviews throughout the investigation, Zullo claimed the media has practiced “gaslighting” in regard to the Obama birth certificate issue, a statement reiterated by one of Hemingway’s Twitter responders on Monday.