CALIFORNIA SENATOR CLAIMS TO BE “TRANSFORMATIONAL” 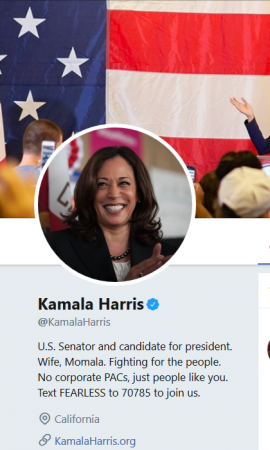 (Jan. 22, 2019) — On January 21, U.S. Senator Kamala Harris (D-CA) officially announced she will run in the 2020 Democratic presidential primary along with what appears to be a crowded field of contenders.

As with her Senate website, her new campaign website omits any reference to her education prior to college.  As The Post & Email has reported, Wikipedia states that Harris was born in Oakland, CA on October 20, 1964 and moved with her mother and sister to Canada at the age of seven following her parents’ divorce.  According to the entry, Harris attended and graduated from Westmount High School in Westmount, Montréal, Québec.

The Canadian Broadcasting Company (CBC) has confirmed that report.  In its January 21, 2019 article, the CBC quoted a former Harris classmate, Dean Smith, describing her as “a good person” who was “always smiling, friendly. A shining light the whole time.”

Smith also reportedly told Radio Canada, paraphrased, that “he can see the influence the city [of Montréal] had on Harris through her politics.”

Of her early years, Harris’s presidential website states only, “Born in Oakland, Kamala Harris is a graduate of Howard University. She earned her law degree from the University of California, Hastings College of the Law.”

According to The Montreal Gazette, Harris wrote about her relocation from Oakland to Québec in her book, “The Truth We Hold: an American Journey.”  The article adds that Harris attended a French-speaking elementary school prior to her enrollment at Westmount.

The introduction to the book, published January 8 of this year, reads, in part:

Senator Kamala Harris’s commitment to speaking truth is informed by her upbringing. The daughter of immigrants, she was raised in an Oakland, California community that cared deeply about social justice; her parents–an esteemed economist from Jamaica and an admired cancer researcher from India–met as activists in the civil rights movement when they were graduate students at Berkeley. Growing up, Harris herself never hid her passion for justice, and when she became a prosecutor out of law school, a deputy district attorney, she quickly established herself as one of the most innovative change agents in American law enforcement.

Included in the book’s introduction is the claim that Harris is “a transformational United States Senator.”  In 2008, Barack Hussein Obama, whose presidential eligibility remains in doubt in the minds of many based on a criminal investigation finding that an image said to represent his “long-form” birth certificate is a forgery, was said to be a “transformational figure” in American politics.

On Monday’s “Good Morning America” on ABC, Harris said that her “parents were very active in the civil-rights movement, and that’s the language that I grew up hearing.”

Her Senate website arguably implies that she spent her childhood in Oakland:

Growing up in Oakland, Kamala had a stroller-eye view of the Civil Rights movement. Through the example of courageous leaders like Thurgood Marshall, Constance Baker Motley, and Charles Hamilton Houston, Kamala learned the kind of character it requires to stand up to the powerful, and resolved to spend her life advocating for those who could not defend themselves.

In order for Harris to have to served as Alameda County District Attorney, California Attorney General, and a U.S. Senator, she would have had to have been a U.S. citizen and resident of the State of California.

The eligibility criteria for the president and Commander-in-Chief contained in Article II, Section 1, clause 5 of the U.S. Constitution are:

The term “natural born Citizen” is believed by many constitutional scholars and citizen researchers to designate a higher level of allegiance than simply “a citizen of the United States,” the citizenship requirement of U.S. representatives and senators as well as state-level office-holders.

Multiple sources report that Harris’s parents were immigrants who came to the United States less than five years before she was born. Given that U.S. immigration law since 1952 has required a five-year residency for a legal immigrant to apply for citizenship, it is a virtual certainty that neither of her parents was a U.S. citizen when she was born in 1964.

Many contend that a simple birth in the United States is enough to qualify as “natural born,” regardless of the citizenship of the person’s parents.  In modern times, the 14th Amendment is interpreted to bestow U.S. citizenship on any child born on U.S. soil, including its territories, regardless of the status of the parents.  However, the media often conflates “citizen” with “natural born Citizen.”

In July 1787, Founding Father John Jay wrote a letter to Constitutional Convention president George Washington in which he stated:

Harris’s Senate office has not responded to inquiries from California citizen Gary Wilmott regarding her parents’ citizenship status at the time of her birth or afterward, and The Post & Email’s attempts to obtain information remain unanswered.

It is unknown whether or not Harris’s mother ever became a U.S. citizen. A Stanford university biography states that Donald Harris at some point naturalized, although it does not state the year.