(Dec. 9, 2018) — An article posted at lawandcrime.com on Saturday features a panel of MSNBC guests contending that Donald Trump was not honest with the American people when he said he had no dealings with Russia during the 2016 presidential campaign.

The title of the article is “Legal Expert Compares Trump’s Election to Immigrants Who Gain Their ‘Citizenship by Fraud.’”

The panel members, which included a former U.S. attorney, appeared to believe that Russian contacts made in connection with a possible Trump Organization edifice, revealed to Special Counsel Robert Mueller by former Trump personal attorney Michael Cohen during recent plea negotiations, constitute “Russia connections” rising to the level of a presidency obtained “by fraud.”

Mueller is investigating possible “collusion” between Trump campaign figures and Russia as well as Russian interference in the 2016 elections. On November 29, Cohen said he misrepresented to Congress the timeline of the real-estate proposal between the Trump Organization and the Russian government which did not come to fruition.

Cohen also pleaded “guilty” to tax evasion and “making illegal campaign contributions” to two women on behalf of Donald Trump in a separate case prosecuted by the U.S. Attorney for the Southern District of New York.

In a column published late Saturday, former Assistant U.S. Attorney for the Southern District of New York Andrew McCarthy said he believes Trump is “very likely” to face indictment if Cohen’s allegation that Trump directed him to make the payments to the women is accurate.

Trump stood by Cohen last April after Cohen’s office, home and hotel room were raided by the FBI, although Trump now claims that Cohen has “lied.”

The lawandcrime.com article features former U.S. Attorney for the Eastern District of Michigan Barbara McQuade stating on-air that “Michael Cohen takes us all the way back to 2015 when they’re having conversations with Russia about putting together this deal for a Trump Tower in Moscow…this is a very significant matter. This isn’t just a regulatory offense when you’re talking about campaign finance violations. It could be that President Trump procured the presidency by fraud.”

To this writer, who is not an attorney, it appears that McQuade is conflating the campaign finance violations Cohen said he facilitated at Trump’s request with whether or not Trump was honest about any business dealings he had with Russia during the 2016 campaign.

On Sunday morning, The Post & Email submitted the following comment in response to the article, which appeared seconds later in the comment feed.  The comment provided a link to our November 16, 2018 article quoting Obama long-form birth certificate lead investigator Mike Zullo as having said that two U.S. intelligence officials acknowledged to him that Obama’s non-U.S. birth is “an open secret” in Washington.  Along with that, Zullo said, quoting the intelligence agents, was the understanding that the place of Obama’s birth precluded him from being eligible to serve as president.

Article II, Section 1, clause 5 of the U.S. Constitution requires that the president and commander-in-chief be a “natural born Citizen.” While the Framers did not precisely define the term, the U.S. Supreme Court acknowledged in at least four cases its understanding that a person born in the United States to two U.S.-citizen parents is undoubtedly a “natural born Citizen.” As to other classes of citizens, the Court wrote in its 1875 decision in Minor v. Happersett, there remained “doubts” as to whether or not they met the standard of “natural born.”

During the 2008 campaign cycle, former New Mexico Gov. Bill Richardson and Obama supporter had publicly declared Obama “an immigrant.” It is generally, if not universally, understood that an immigrant, or “naturalized” American citizen, is ineligible to serve as president.

Interestingly, the same year, Michelle Obama declared Kenya to be her husband’s “home country“; in March 2010, members of the Kenyan Parliament confirmed her statement.

Within seconds the publication of our comment, a response was posted:

Given the speed with which the comment was posted, it is impossible for the commenter to have read our article, which is titled, “Zullo: Obama Birth Certificate Evidence Briefed to Highly-Placed White House Officials” and provides an update to the finding that Barack Hussein Obama’s “long-form” birth certificate posted on the White House website on April 27, 2011 is a “computer-generated forgery.”

Zullo has also said that investigators were unable to detect a raised seal on the “long-form” image, which Obama claimed represents “additional information about the site of my birth.”   Notably, Zullo has said, as Obama gave the brief presser following the release of the birth certificate image, he did not hold up the document, nor was a copy of an original presented to any journalist despite claims to the contrary.

As this article went to press, two other responses to ours were posted indicating a similar level of denial: 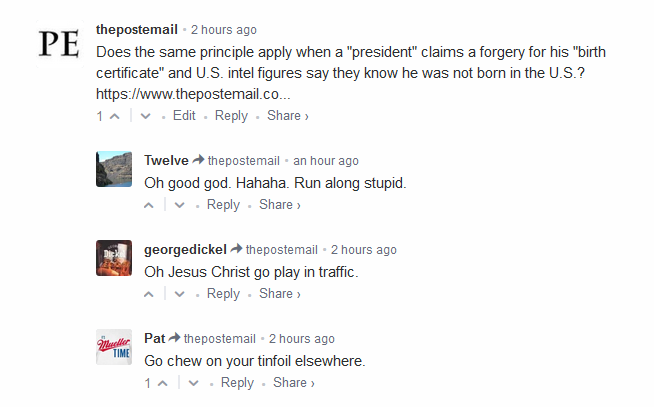 Unlike The Post & Email, the mainstream media, “legal” websites, and opinion sites such as National Review, where McCarthy is a regular contributor, have refused to report on the crime which “very likely” eclipses those which now embroil President Trump: the falsification of a presidential candidate’s life narrative and constitutional eligibility to occupy the Oval Office by the forgery of his purported government-issued documents.