(Dec. 3, 2018) — At approximately 8:25 p.m. EST, CBS White House reporter Mark Knoller tweeted that President Trump made an “unannounced” visit to the U.S. Capitol rotunda to pay his respects to former President George H.W. Bush, who is lying in state, beginning a week of memorial services and celebrations of his life.

President Bush passed away on Friday night at the age of 94.  His final journey to the nation’s capital was marked with a ceremony in Houston, his adopted home city, on Monday morning.

On Monday afternoon, his body was flown to Washington, DC via presidential aircraft designated as “Special Air Mission 41.”  As family were gathering to meet the aircraft at Joint Base Andrews in Maryland, Mike Emanuel of Fox News told anchor Shepard Smith that although Trump would attend President Bush’s funeral, he is not scheduled to deliver remarks, as is the custom for sitting presidents when a past president passes.

During the 2016 presidential primaries, then-candidate Trump, a brash New York real-estate mogul who many considered vastly unqualified and unlikely to win, expressed disdain for former Florida Gov. Jeb Bush, President Bush’s son, who many politicos considered highly qualified as the brother and son of former presidents.

However, Americans chose not to “ordain” a member of a political “dynasty” as the Republican presidential nominee, and Jeb Bush was forced to withdraw early in the race.

In the ensuing months, the Bush family made it clear that they were not fans of Trump, and the late president reportedly voted for Hillary Clinton in 2016.

A photo tweeted by NBC’s Frank Thorp V shows Trump’s wife Melania by his side as Trump saluted the 41st president’s casket in the Capitol rotunda. 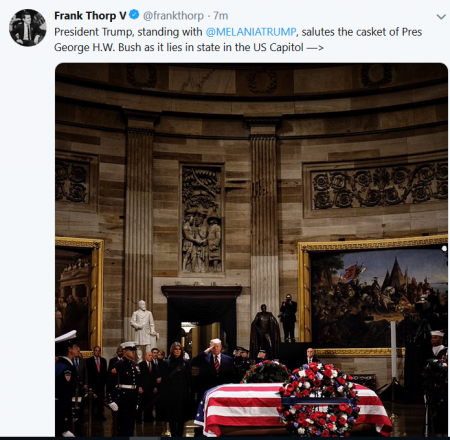 Presdent Trump’s arrival at the rotunda was “quiet” and “not on the president’s public schedule,” CBS News reported Monday evening.

Trump’s statement on President Bush’s passing reads, in part: “With sound judgement, common sense, and unflappable leadership, President Bush guided our Nation, and the world, to a peaceful and victorious conclusion of the Cold War. As President, he set the stage for the decades of prosperity that have followed. And through all that he accomplished, he remained humble, following the quiet call to service that gave him a clear sense of direction.”

In a proclamation issued Saturday, Trump declared Wednesday a national day of mourning, and American flags around the world are to be flown at half-staff through December 30, 2018.  Also on that day, his funeral will be held at the National Cathedral which the Trumps are expected to attend.