(Nov. 29, 2018) — On Thursday afternoon a user of a “State of Tennessee” ISP was noted to be reading more than half-dozen articles focusing on Tennessee Department of Correction (TDOC) inmate Grenda Ray Harmer, #88710, a prolific writer and one who considers himself a prison whistleblower.

Unlike many of the entries we see from the “State of Tennessee,” this reader restricted him- or herself to articles from this year, the earliest of which is dated June 29, 2018. The reader also accessed the federal lawsuit Harmer filed in March provided by a link in one of the articles, the documentation of which was obtained by this writer through the federal “PACER” system.

We often see Tennessee government readers accessing earlier articles crafted from letters sent to us by TDOC inmates from around the state.

It is also certain that someone within Tennessee state government is aware of the numerous reports we received from inmates at the Northwest Correctional Complex (NWCX) beginning last spring reporting that correction officer Julie Abbott has allegedly arranged for vicious inmate-upon-inmate assaults, fabricated transgressions on the part of inmates out of retaliation and brought contraband into the prison in violation of state law. 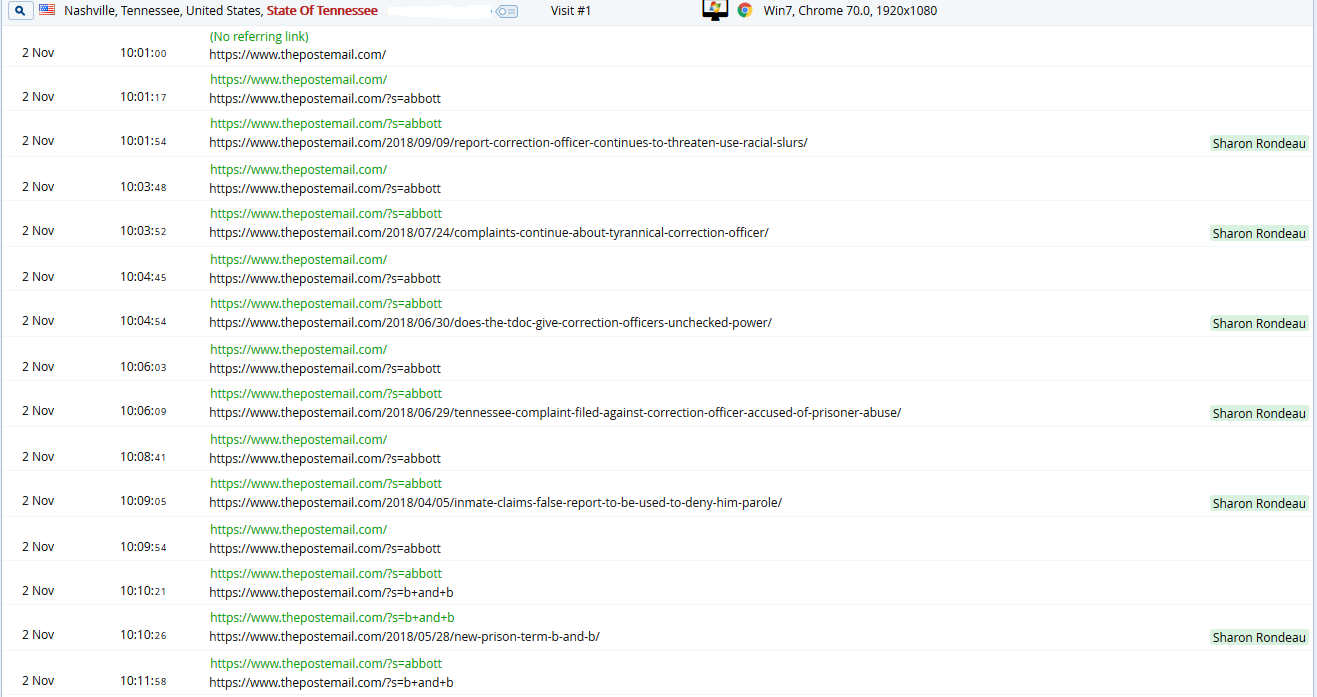 The Post & Email’s readers’ log shows the State of Tennessee’s awareness of inmate allegations that they and others were forced to enroll in classes whose qualifications they failed to meet, purportedly for the prison and/or TDOC to receive federal financial assistance.  The specific article accessed below is titled, “TDOC Mum on Forced Participation in Taxpayer-Funded Class.”

The log does not specify which government department is accessing our material.

Although having claimed that Harmer’s numerous reports on correctional institution abuse, fraud, waste and corruption are “erroneous” and “outright fictitious,” the TDOC has never contacted The Post & Email to request the removal or correction of any article. In fact, when we have reached out to them about reported situations such as inmates being deprived of prescription medication, gang activity, and security issues, we have received virtually no response.

Harmer has reported improvements in certain conditions after allegedly observing them.  His most recently-published complaint, however, stated that he has been deprived of his prescription Antivert, taken to prevent vertigo for a chronic condition, for more than six months, an issue he raised in his federal lawsuit.

The State of Tennessee is Well Aware of Grenda Ray Harmer added on Thursday, November 29, 2018