BUT ARE THEY DESERVED?

(Nov. 11, 2018) — Publicly-available data shows that virtually all social workers and supervisors involved in a case originating in March 2016 with the Los Angeles Department of Children and Family Services (DCFS) have received pay raises and promotions funded by county taxpayers.

The case, encompassing mother “Michelle Robinson,” her youngest child and the father of the child, Eric Crutchfield, arose in 2016 after an LAPD police detective interpreted Robinson’s physical altercation with Crutchfield as evidence that she violated a restraining order in place to protect her from Crutchfield.

Whether or not the raises and promotions are connected to the case or would have occurred otherwise is unclear.

As The Post & Email has reported, although Robinson immediately filed a complaint against Crutchfield following the altercation, a complaint was mysteriously submitted by Crutchfield long after the fact.  In March 2016, DCFS took the child from Robinson and placed her with Crutchfield, who Robinson had documented had a history of domestic violence and drug use.

Robinson maintains that DCFS social workers pursued an agenda by acting as “co-conspirators” to place her daughter with her father, who had been a non-custodial parent up to that point.

On December 10, 2015, ten days before the altercation, Robinson obtained a temporary restraining order (TRO) against Crutchfield stemming from an incident in March of that year during which she suffered visible bruising, broken furniture and electronics in her home at his hands.

Ten days later, because it was their daughter’s first birthday, Robinson took the child to see her father, where she and Crutchfield entered into the physical entanglement as the child slept in her car seat.

As a result, Robinson suffered a human bite.  Realizing she required medical attention, she delivered her daughter to an adult sibling, went to the emergency room and received treatment, then provided a report along with the medical report to the LAPD.  In her statement, Robinson requested that Crutchfield be prosecuted.

During the course of an investigation, LAPD detective Sean Horton reported Robinson to DCFS for allegedly violating the December 10, 2015 restraining order. Horton told DCFS that a video of the altercation existed, although the worker who took his report admitted Horton did not provide it to her.

As with the case of Roosevelt and Kanika Williams, whose three children were removed from their care and placed with Kanika’s parents on a path to adoption, Robinson believes that her daughter’s eventual permanent placement with her father was “predetermined” by DCFS social workers who developed a personal dislike for her because of her outspokenness.

On April 25, 2017, Crutchfield was given permanent legal and physical custody of his daughter, which Robinson appealed unsuccessfully earlier this year.

The commissioner presiding over the dependency case at the Edelman Children’s Court, Steff Padilla, has apparently not been questioned about an October 14, 2016 order bearing her signature terminating the restraining order protecting Robinson from Crutchfield.

Padilla’s apparent cancellation of Commissioner Glenda Veasey’s December 10, 2015 restraining order appears to have been key to Crutchfield’s eventual custody award given that Veasey stipulated at the time that Robinson was to retain full legal and physical custody of the child.

Robinson was never notified that Padilla canceled Veasey’s order, nor was Veasey, as she stated on the Family Court record in Torrance, CA in March of this year.  The Hawthorne Police Department provided the document to Robinson but was unable or unwilling to identify its source other than to say it originated with the department’s “court liaison officer.”

A California open records request for documents concerning the alleged officer submitted to the HPD last spring by The Post & Email never received a response.

Further inquiries made to Supervising Judge Michael I. Levanas, including a copy of Padilla’s “Order to Terminate Restraining Order” and a request for an investigation, received a response from Levanas stating that he cannot discuss nor confirm the existence of any dependency case due to confidentiality laws.  Levanas added that he cannot overturn any decision of a judge under his supervision.

Robinson has additionally found that hearing dates and transcripts associated with her daughter’s case are inaccurate.  In a letter responsive to her complaint on the matter, Levanas wrote that he reviewed transcripts from hearings on October 5 and 6, 2016 which Robinson said never occurred, or, if they did, she was not notified of them.

In another instance, Levanas reported no transcript for a date when Robinson said she did attend a hearing.

When the custody change to Crutchfield was ordered on a temporary basis, Robinson was granted monitored-only visitation paid for by DCFS which she attended during her lunch hour from work.  On one occasion, Robinson described how she arrived at DCFS at the designated time only to find that social workers said they “could not find” the child.

After Crutchfield was granted permanent physical and legal custody as well as all educational decision-making, Robinson experienced difficulty in finding monitors who met her standards and subsequently concluded that she should not have to pay to see her child.  She has therefore not seen her for over two years and, with each parent restrained from contacting the other, has no idea how she is faring.

DCFS employee Rene Sandoval obtained a restraining order against Robinson after a chance encounter at a grocery store in April 2017 during which Robinson approached Sandoval, invoked her child’s case and shook his hand.

As a supervisory social worker in 2015, Sandoval earned $160,461.80 in regular, overtime, and “other” pay plus fringe benefits; as an assistant regional manager in 2017, he was paid $173,655, a figure which does not include overtime compensation.

Data on Sandoval at Transparent California dates back to 2011.  Robinson attributes the removal of her daughter from her care to Sandoval’s decision-making. 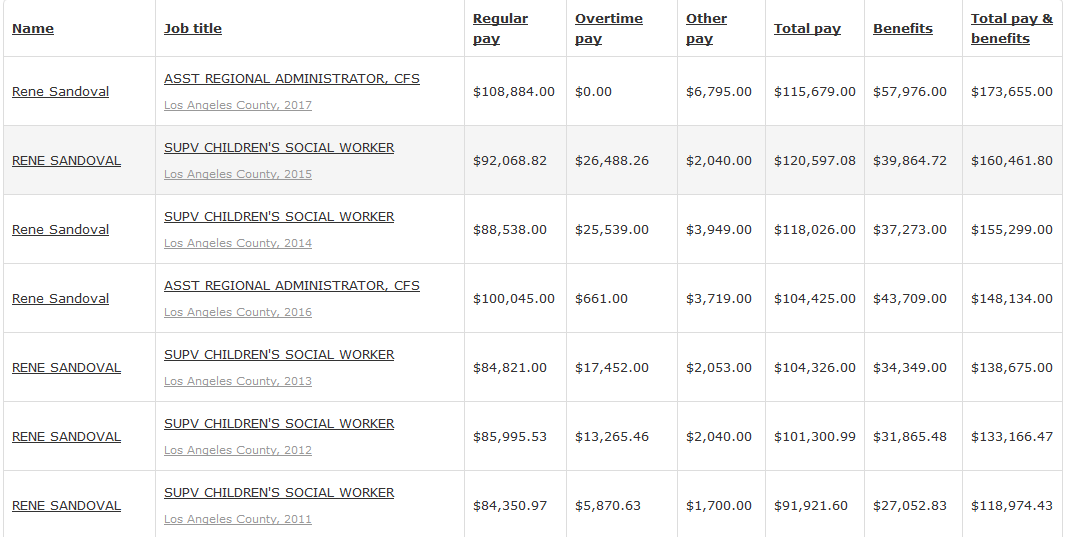 After the encounter at the grocery store, Sandoval told the court that he was uncomfortable with Robinson’s having posted his photograph online and filed a request for a restraining order which was granted as permanent custody was awarded to Crutchfield.

Supervisory social worker Nicolle Winbush earned almost $12,000 more in 2017 from all sources, including benefits, than in 2015 while maintaining the same position. 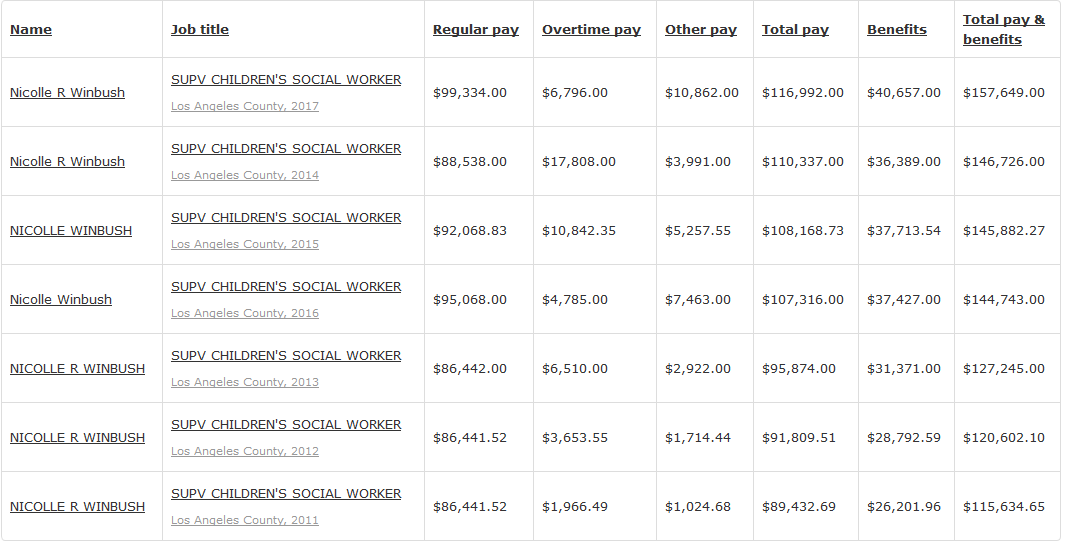 Conversely, a supervising social worker who Robinson described as helpful to her cause of regaining custody of her daughter, Kassandra Love, earned less in 2017 than in 2016. 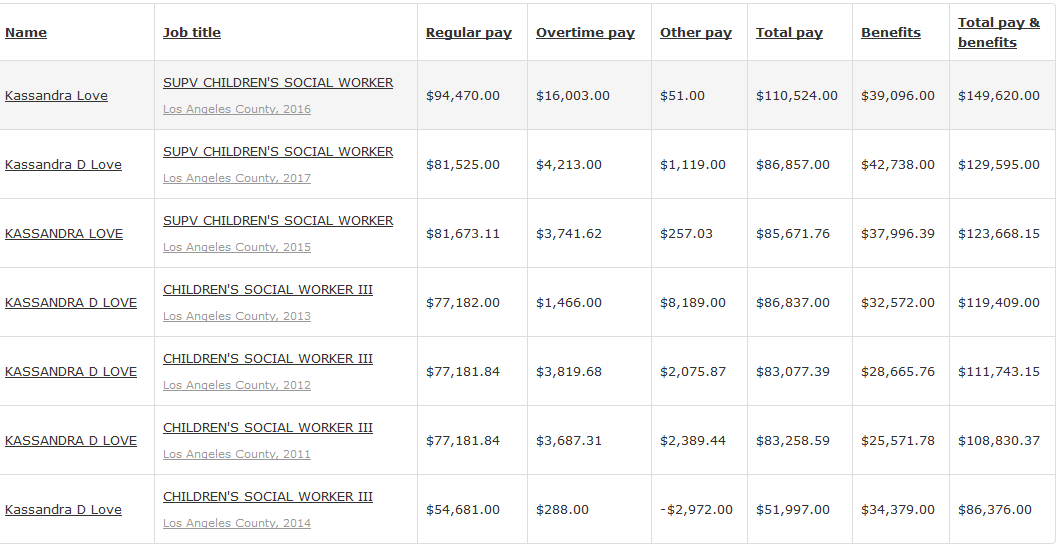 Regional Administrator Sonia V. Contreras, who supervised all DCFS personnel involved in Robinson’s daughter’s case, earned $229,730 last year, an increase worth $11,000 more in real dollars and over $12,000 more in benefits over the previous year. 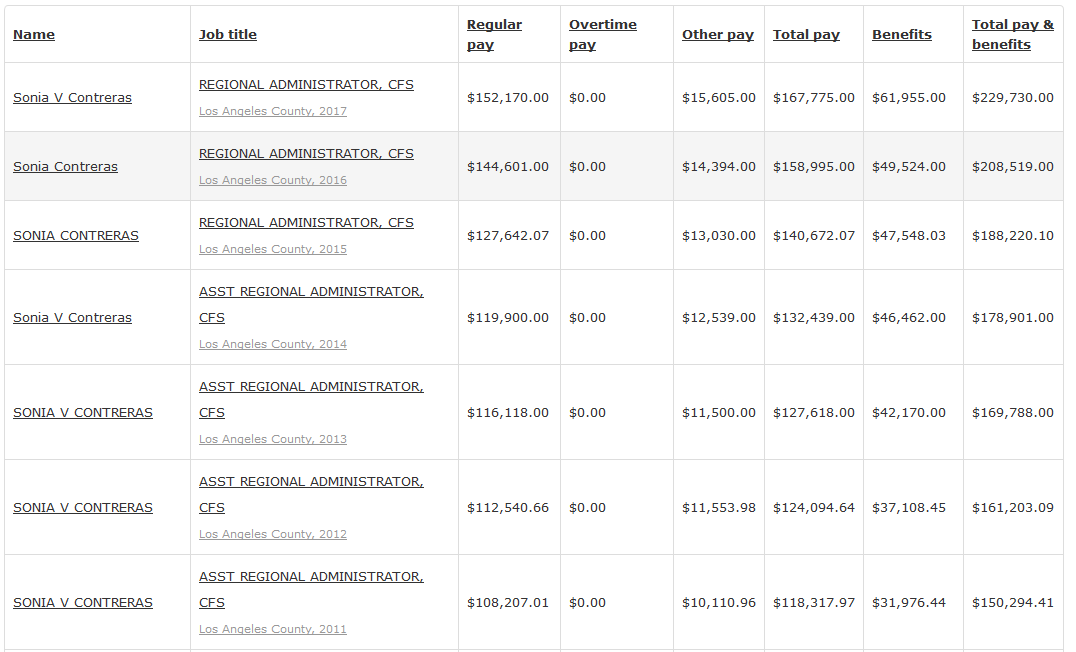 The DCFS-assigned monitor received a significant pay increase from 2016 to 2017.  Beginning her county employment as a parking attendant in 2013, Aderemi A. Bello transitioned to the respective positions of Human Services Aide and Children’s Social Worker Trainee, more than doubling his income and benefits year over year.