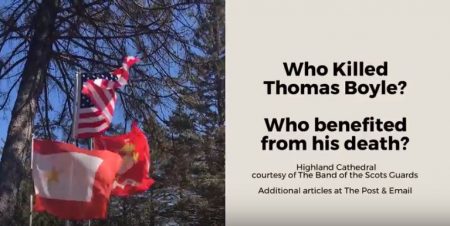 (Jul. 30, 2018) — [Editor’s Note:  The widow of civilian contractor Thomas J. Boyle, Jr. has released Part 8 of her video series depicting the inconsistencies surrounding how her husband was killed in Kandahar, Afghanistan on June 19, 2012.

The video is here:  https://www.youtube.com/watch?v=bgpM2g-1QDQ&feature=youtu.be

Previous installments in the series can be viewed here:

The newest video includes footage from a National Geographic film of the rescue of those wounded in the insurgent attack on FOB Provincial Reserve that morning, although Mrs. Boyle is certain her husband was killed by other means based on eyewitness reports and independent forensic examinations.

For the first time, Mrs. Boyle revealed that while her husband’s body was being taken to Kandahar Airfield by land transportation, where the wounded had been taken by helicopter, “the driver received orders to turn around and proceed to Camp Nathan Smith” in Kandahar City.  She claimed that Col. Patrick Michaelis gave that order, effectively breaking the chain of custody.

In closing, Mrs. Boyle said that during the course of her own investigation into her husband’s death, which continues to this day, she was told, “Ma’am, it’s just like Vietnam.”]