“IT’S GOING TO GET REALLY BAD” 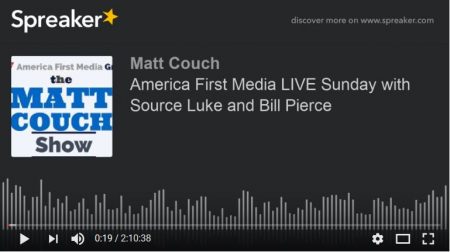 (Jul. 30, 2018) — On Sunday afternoon, America First Media Group (AF-MG) hosted a 2+-hour live broadcast on Twitter and Periscope as an adjunct to a July 10 press conference during which a source called “Luke” answered questions by telephone.

In Sunday’s more detailed update, Luke provided a narrative of his alleged experiences as an informant for the U.S. Justice Department beginning in 2004.  Luke claimed a military intelligence background and a track record of identifying and locating terrorists.  He also claimed to know now-Deputy Attorney General Rod Rosenstein well, to the point of having allegedly overheard Rosenstein make derogatory comments about female attorneys and judges and demonstrating an insatiable lust for power.

AF-MG has been conducting an independent investigation into the slaying of former DNC Data Director for Voter Registration Seth Rich just over two years ago near his Washington, DC apartment. The mainstream media has happily parroted the Washington, DC Metro Police Department’s narrative of a “botched robbery attempt,” although Luke described a completely different scenario both on July 10, 2018 and on Sunday afternoon.

Luke also claims to be acquainted with former FBI counsel Lisa Page, whose texts with now-embattled FBI counterintelligence deputy chief Peter Strzok became a focus of the attention of the Justice Department’s Inspector General over a 17+-month investigation into allegations of wrongdoing within the DOJ and FBI in 2016.  On June 14, IG Michael Horowitz’s report was made available to the general public.

AF-MG founder Matt Couch, colleague Bill Pierce, and Luke made it eminently clear that they believe Luke and his family are in grave danger given that Luke not only claims to possess evidence of who Rich’s killers were, but is also now informing AF-MG of alleged government surveillance of its investigation.

Both on July 10 and yesterday, Luke mentioned “Article III judges” as being the target of pervasive government surveillance such that they are allegedly “controlled.” “They’ve manipulated the court system for a long time,” Luke said approximately one hour and 45 minutes into the broadcast.

Since 2015, Attorney Larry Klayman, who was representing former NSA/CIA contractor Dennis Montgomery, has alleged that “156 judges” were shown by data Montgomery collected over a period of years to have been the object of government surveillance.  Added to that list, Klayman said, were then-businessman Donald Trump; a number of his managers and family members; other prominent businessmen, and Klayman himself, among others.

Page and Strzok were aware of Montgomery’s claims and evidence presented to FBI officials in November 2015.

Luke also alleged that as U.S. Attorney for the District of Maryland, Rosenstein was aware of criminal activity reported to him but chose not to prosecute in some cases.

Later in the broadcast, he was asked about former CIA Director John Brennan, who he described as “corrupt to the core” and “much more dangerous than Rod.”

At both the beginning and conclusion of the broadcast, Couch said that his group has approached the U.S. House Intelligence Committee chaired by Devin Nunes to request action on Luke’s allegations without success. Couch is also seeking official witness protection for Luke and urging members of the public to contact members of the committee.

The U.S. House of Representatives is on summer break until September 4, although Couch urged his followers to communicate with members of Congress on Twitter.

“It’s going to get really bad,” Luke remarked toward the end of the show.

The YouTube podcast of the show is here:  https://www.youtube.com/watch?v=UkmgOcbHv_M