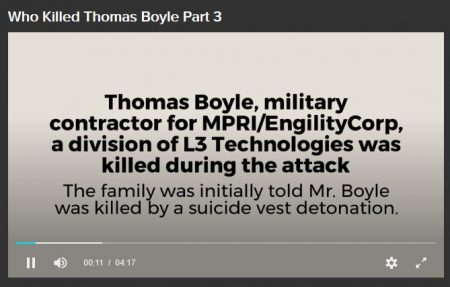 (Jun. 19, 2018) — On the sixth anniversary of his death, the widow of the late civilian contractor Thomas J. Boyle, Jr. has produced a third video in a series depicting what she was initially told about her husband’s death and information she was provided later by eyewitnesses.

Parts 1 and 2 are here and here, respectively.  Part 3 can be viewed here:  https://video214.com/play/lyQvJYPXNcKkAQtQC3F1bg/s/dark

A retired Chicago police officer and decorated Vietnam veteran, Mr. Boyle was deployed with the 303rd Military Intelligence Battalion in Kandahar, Afghanistan on the morning of June 19, 2012, when the base came under attack by insurgents.  However, Mrs. Boyle is convinced that her husband was not killed as a direct result of the attack, but rather, by “friendly fire,” a fact she claims the U.S. military has obscured in order to protect the career of the base commander.

A second, independent autopsy contradicted the military autopsy findings and showed that multiple gunshot wounds had been sewn shut prior to Mr. Boyle’s funeral and interment.

As a result of the questions which remain about how Mr. Boyle died, his widow was denied life insurance benefits from five different carriers, two of which nevertheless documented in their files, as shown in the video, that Mr. Boyle’s death was conveyed to them as “accidental,” and not as a direct result of “war.”

While Mrs. Boyle currently receives death benefits under the federal Longshoremen’s Act, the records of the U.S. Department of Labor are also contradictory and therefore inaccurate as to the cause of her husband’s death.