Why Are Inmates Kept So Long in Protective Custody? 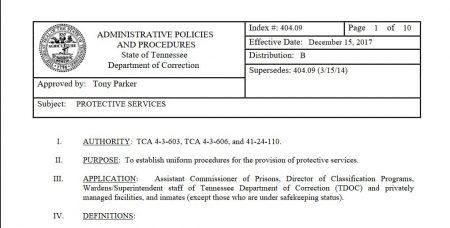 (Jun. 8, 2018) — On Friday, a copy of a letter dated June 4, 2018 addressed to Tennessee Department of Correction (TDOC) Commissioner Tony Parker was received by this publication.

The letter, written by Morgan County Correctional Complex (MCCX) inmate Grenda Ray Harmer, #88710, is the eighth of its kind in which Harmer informed Parker that a number of inmates currently housed in the prison’s protective custody unit have made formal requests to be relocated which have been ignored in apparent violation of TDOC policy.

In his letter, Harmer quoted TDOC Administrative Policy #404.09, which details the need and parameters of an inmate’s placement into and exit from PC.  The policy was last updated in mid-December 2017 and bears Parker’s approval.

Harmer has sent us copies of the requests he has submitted to MCCX Warden Mike Parris and Parker with the names and inmate numbers of individuals currently in the PC unit who wish to be relocated to other prisons where they believe they will be relatively safe within the general population.

Harmer claims that a financial motive exists for maintaining inmates in protective custody for long periods of time. “I know why you are not forcing change,” he wrote. “You receive more money by having a large number of inmates on P.C. Status. Your reasoning is P.C. inmates require greater security, which is logical reasoning. What you don’t reveal is what TDOC Policy 404.09 and ACA Standard 4-4257 states, which I’ve made you aware of as I now will again.”

“ACA” stands for “American Correctional Association,” from which the TDOC receives accreditation.

On page 2, Harmer quoted from the ACAs “Adult Correctional Institutions” publication along with the section title and page numbers.  That volume is for sale at the ACA’s website here; The Post & Email does not currently possess a copy.

In the letter, Harmer accused Parker of “condoning” a violation of TDOC policy.  Harmer, who has been in PC since last August, has additionally reported that recreation and other customary activities are severely curtailed to the unit’s inmates even though they are technically not there for punitive reasons.

Over the last two years, several relatives of inmates placed in PC have told The Post & Email that the placement lasted many months or is still ongoing after months rather than days or weeks.  According to TDOC policy, regular reviews of an inmate’s placement in PC must be conducted.

Last month, Harmer reported that the only “review” he received during his ten months in protective custody was a conversation directed to him through his cell door by correction officers within auditory range of other inmates. 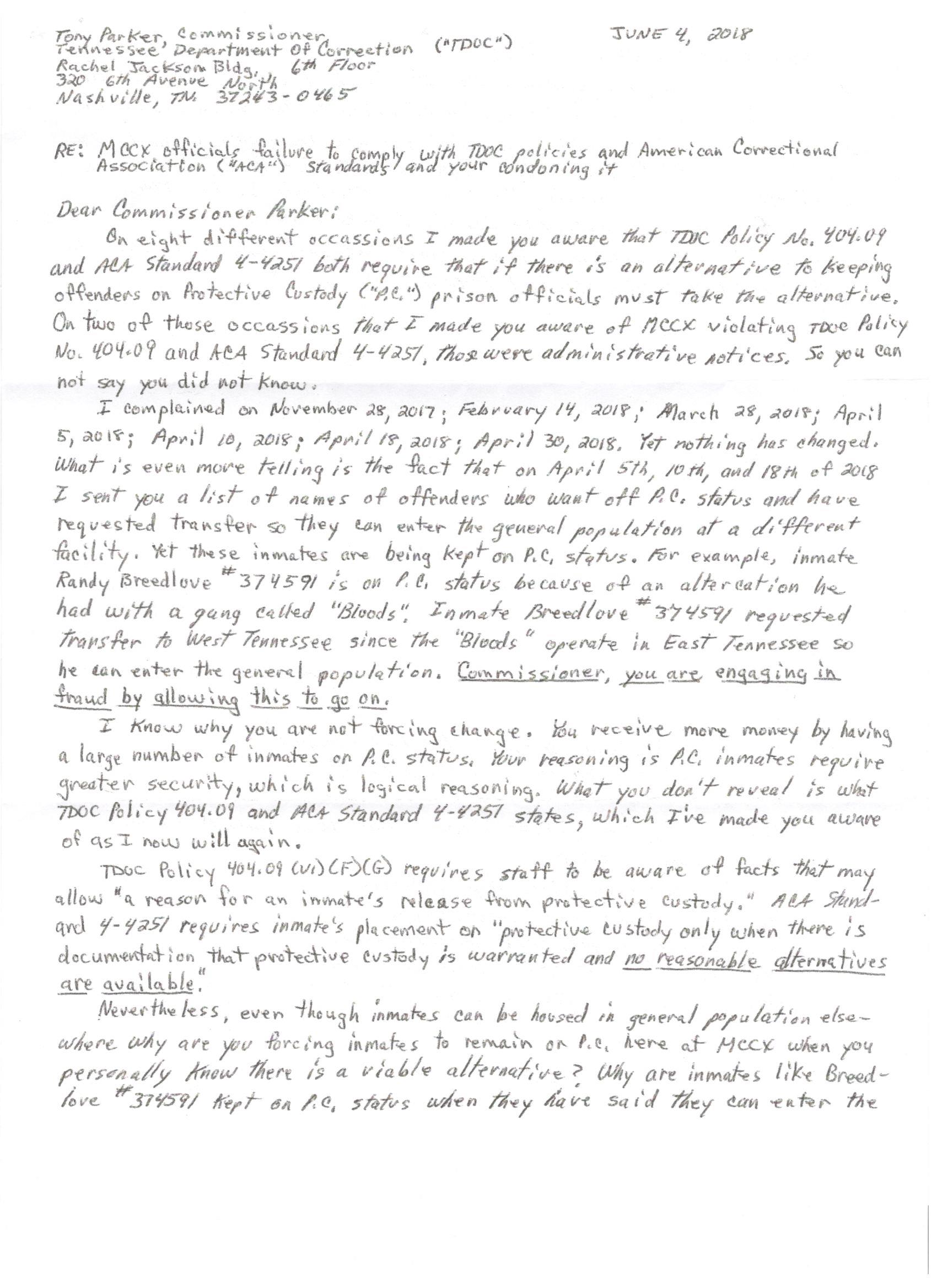 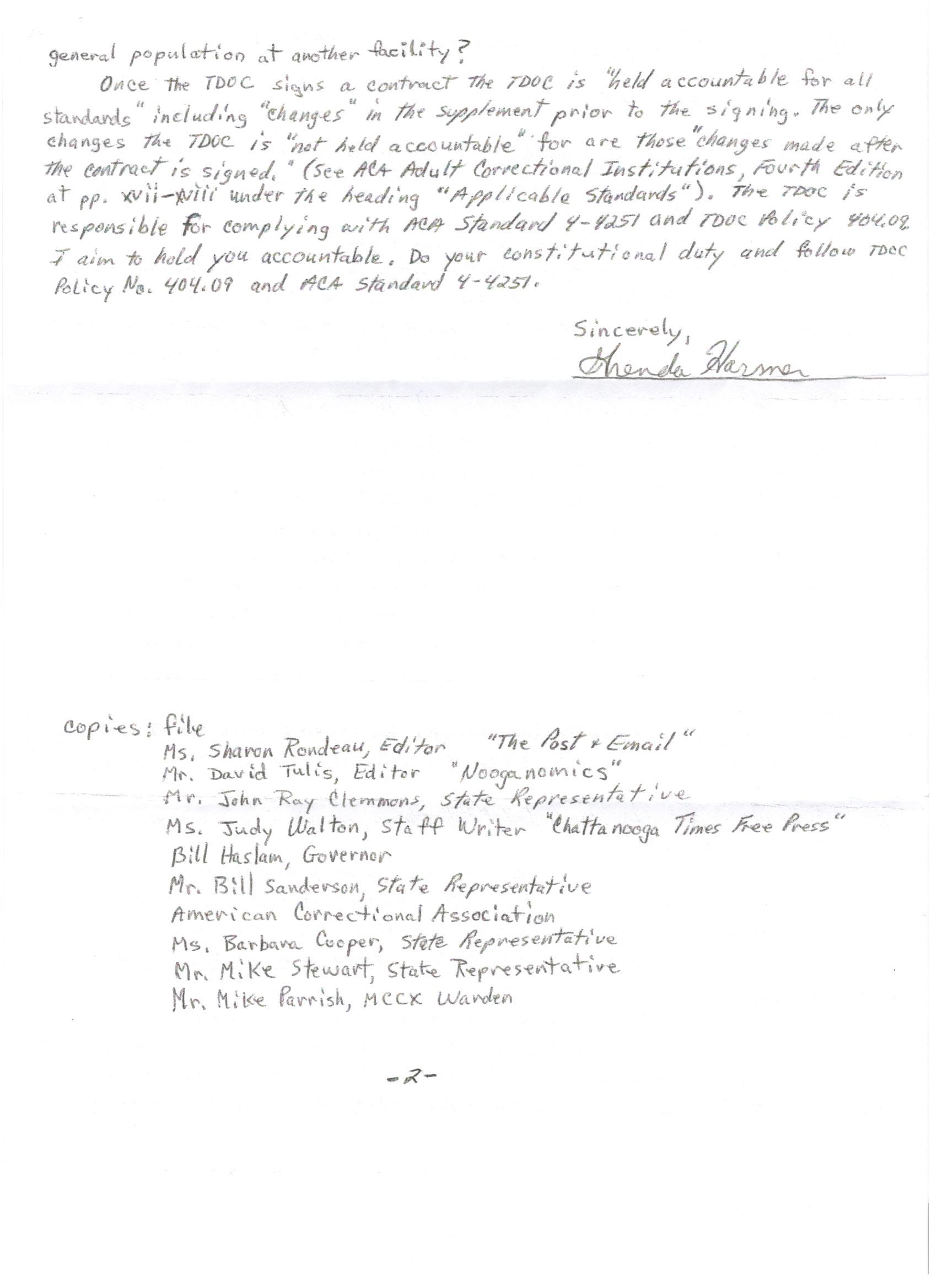 The ACA “Standards” are not available online but are available for purchase.  According to the ACA website, “As changes to the standards are made at every ACA conference, the Association also prints a Standards Supplement on a bi-annual basis.  Available every other year in January, the Standards Supplement contains changes to all ACA standards manuals since the printing of the most recent edition of that manual.”  The “supplements” are also available at ACA’s “Marketplace.”

Why Are Inmates Kept So Long in Protective Custody? added on Friday, June 8, 2018