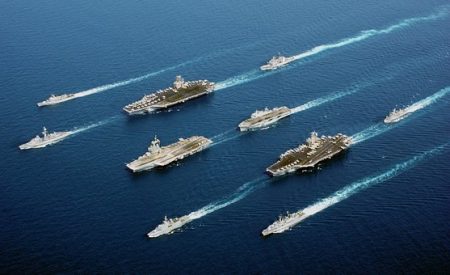 (Jun. 8, 2018) — Conversation aboard the USS XXXX, a US NAVY Destroyer, somewhere in WESTPAC*. The sailors are lounging on the fantail** talking and listening to a guitar.

“I’m slidin’; let me check my watch: sorry, since I’ve only 143 days left, I just don’t have time to sit and chit-chat; but there’s always exceptions so maybe I’ll shoot the breeze with you guys for awhile.”

“Gee; don’t be doin’ us any favors. Hey, who’s got the bridge tonight?”

“The new one from the Academy? Just graduated?”

“Five dollars we get broadsided.”

“Why don’t we do the broadsiding? Why can’t we ram other ships?”

“First of all because we’re pretty small, or haven’t you noticed? We’re one step above being rented to float down some lazy river.”

“We could shoot other ships and sink them that way.”

“That sounds like a lot of fun but we’re not allowed to do that in peacetime.”

“A hundred dollars we ram somebody tonight.”

“What, you want two ships slamming into one another in the middle of the night and no one gets killed? Get real. Make it ‘six are missing.’”

“Now that I like. So this new JG, is he really as flaky as you make him out to be? By the way, who’s on helm?”

“Jackson, but who knows about the new guy?”

“Jackson’s a nut case, I’ll grant you that. He’d like to ram another ship. Look, we’re out here in the middle of the ocean steaming around in circles, and what are we protecting?”

“Why, we’re heroes, didn’t you know that? We’re the brave men in uniform. Meanwhile, illegal immigrants are getting better treatment than any of our Veterans ever got, or ever will get.”

“So what’s the reason for us floating on this tin can?”

“So the women can swoon at us in our dress blues.” 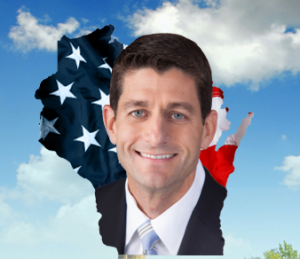 “Really. So tell me, if people like that RINO representative from Wisconsin, Paul Ryan, can get away with subverting the government by touting amnesty and all the other stupid cry-baby-too-bad America-grin-and-take-it, why can’t we, maybe, do something.”

“That’s just it; I don’t know, but if we all thought about it maybe we’d come up with something.”

Do you know that you are known far and wide as ‘The People’s RINO from Wisconsin’?

The Crew from this-here Tin Can’

What do you think?”

“I’ll pay for the postage.”

“Wait. Let’s put in a postscript.

‘We voted for Trump to have him get rid of the illegal immigrants; that’s each and every illegal immigrant ever born; no DACA; no exceptions: so why don’t you do your job, and if you can’t do it, go home. Now.’

“What do you think?”

[**fantail: aft deck of a ship; traditionally a place where enlisted can lounge in the evening where Chiefs and officers are not welcomed.]