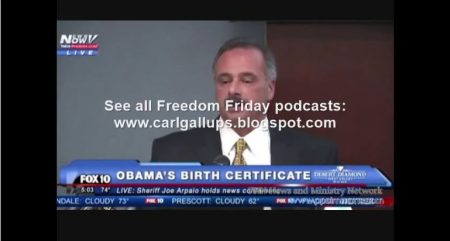 (Jun. 3, 2018) — On the June 1 broadcast of “Freedom Friday,” host Carl Gallups recounted the appearance on his previous show of Mike Zullo, lead investigator for the probe concluding that the “long-form” birth certificate image posted on the White House website in 2011 is a “computer-generated forgery.”

In a soliloquy lasting approximately 20 minutes, Gallups reminded listeners that on May 25, Zullo had said that his findings, gathered over more than five years, led him to believe that “all roads lead back to John Brennan” in regard to the birth certificate forgery.

Brennan was Obama’s final CIA director.  In March 2008, when the State Department passport breaches of the files of Sen. John McCain, Hillary Clinton and then-Sen. Barack Obama occurred, Brennan was CEO of The Analysis Corporation, one of whose employees was found to have been involved in the breaches but was reportedly not fired.

Two of the three contract employees had been fired before The Washington Times first reported Thursday on security breaches involving Mr. Obama’s passport records. The furor expanded yesterday to incidents involving the passport records of Mr. McCain and Mrs. Clinton.

The third employee, who has not been fired, worked for The Analysis Corporation (TAC), which is headed by John O. Brennan, a former CIA agent who is an adviser to Mr. Obama’s presidential campaign on intelligence and foreign policy.

The TAC employee is the only individual to have accessed both Mr. Obama’s and Mr. McCain’s passport information without proper authorization, a State Department spokesman said. That employee, who was not named, triggered an electronic alarm system, officials familiar with the probe said.

[Video courtesy of the PNN News and Ministry Network (ppsimmons.com).]

In September 2018, one contractor was reported charged with a crime in connection to the passport breaches, but an ABC News report does not say for which contracting company he worked while at the State Department.

Within the first two minutes of the June 1 show segment, Gallups said that “most” of the information Zullo gleaned from the investigation has not yet been released.

Gallups said that the revelation about Brennan was one of two new pieces of information Zullo divulged on May 25.

Just after the 3:00 mark, Gallups said that in his opinion, it would take “good, clean, legitimate” courts, Congress, FBI and Justice Department to credibly investigate Zullo’s findings.  At a final press conference stemming from the probe held on December 15, 2016, then-Maricopa County Sheriff Joseph Arpaio, who authorized the investigation, said that the totality of evidence collected would be turned over to “federal authorities.”

Zullo has previously said that the FBI and DOJ were “compromised” and therefore could not be trusted to act on his conclusions that the long-form birth certificate image, as well as Barack Obama’s purported Selective Service registration form, are fraudulent.

Gallups said the goal, as he sees it, is to have “the truth” made public.  “We are out to preserve proper rule of law, proper investigation, proper cooperation between legitimate, clean federal authorities like it should have been from the beginning,” Gallups said at 7:38.

He then declared the media “complicit” in covering up the birth certificate forgery.

At 8:47, Gallups issued a warning to “anybody that’s listening that might wish to do Mike Zullo harm, thinking if we can do some harm to him or Sheriff Arpaio then this thing can be hidden, it’s way too late for that.  All of the information of this investigation has been scattered into the hands of very important, trustworthy people who understand the importance of this…”

At 9:33, Gallups reminded the audience of Zullo’s revelation that “the investigation is in possession of hard-copy evidence that back in 2011, just prior to that birth certificate being released on the White House website…url trails and everything else, that the CIA was breaching the Department of Health records in Hawaii as well as the Department of Health historical records at the University of Hawaii as well as pulling information from those sites, sending that information to Jakarta, Indonesia to another CIA server, and then that information was transferred right into Washington, DC out of Jakarta.  And then, boom, lo and behold, there appears a long-form birth certificate on the White House website…”

Following a break, Gallups said (13:56) that if “federal authorities” were to investigate Zullo’s evidence, “then they will discover what Mike Zullo believes he knows:  that all roads lead back to John Brennan.”

The second new item Zullo declared on May 25, Gallups said, was the discovery of a “latent fingerprint” on one of the multiple “layers” comprising the birth certificate image.  “You can still identify people with a partial print,” Gallups, a former Florida deputy sheriff, said.

Gallups cited a May 23 article from The Daily Caller which reported that FBI agents wish to be subpoenaed by Congress in order to “reveal the bureau’s dirt.”  The article explained that the agents reason that they can avoid agency retaliation if they respond to a congressional subpoena to testify rather than act as whisteblowers.