AND EXPANDED TO INCLUDE ADULT CHILDREN OF LOS ANGELES MOTHER

(Apr. 26, 2018) — A hearing on Monday morning at the Torrance, CA Superior Court, Family Law division resulted in a restraining order issued in December 2015 said to have been canceled by another jurist 18 months ago being renewed for an additional five years.

In the new court order issued by Commissioner Glenda Veasey, “Michelle Robinson” and her two adult daughters are named as protected persons and Eric L. Crutchfield the person who is to avoid all contact with them.  The order is dated April 23, 2018 and expires on April 23, 2023 at midnight.

In California, the maximum duration of a restraining order is five years.

Crutchfield is the father of Robinson’s youngest daughter, who is three years and four months old.  Veasey’s December 10, 2015 “permanent” restraining order protecting Robinson from Crutchfield also assigned her full legal and physical custody of the child as a result of the domestic violence Robinson reported as perpetrated by Crutchfield.

However, exactly one year ago, the toddler’s custody was decided permanently in Crutchfield’s favor by the Edelman Children’s Court in Monterey Park, a division of the California Superior Court system.

On December 20, 2015, Robinson had taken the toddler to see her father on the occasion of her first birthday, ten days after the permanent restraining order was issued.  During the encounter, Robinson and Crutchfield became involved in a physical altercation.

Robinson filed a criminal complaint against Crutchfield, who did not immediately report the incident.  Robinson alleges that during his investigation of her complaint, Los Angeles Police Department (LAPD) Det. Sean Horton sympathized with Crutchfield, encouraged him to file a complaint against Robinson “after the fact,” and contacted the Department of Children and Family Services (DCFS) to report the child as having been endangered by Robinson.

On March 15, 2016, DCFS took custody of the child and placed her in Crutchfield’s care.  Last April, Judge Frank Menetrez awarded full legal and physical custody to Crutchfield as well as a permanent restraining order against Robinson which Crutchfield requested as a result of alleging that Robinson called his employer.

Since that time, Robinson has been attempting to regain custody and has an appeal filed to Menetrez’s decision.

In mid-February, Robinson was told by Capt. Julian Catano at the Hawthorne Police Department that the Torrance restraining order was no longer valid.  Catano attached to an email a purported document appearing to have been signed by Commissioner Steff Padilla from the Edelman Children’s Court on October 14, 2016 intended to terminate the December 10, 2015 restraining order.

On October 9, 2017 and again on February 8, 2018, Crutchfield and Robinson interacted in what she believed were restraining order violations on Crutchfield’s part.

The October encounter was a vehicular incident in which Robinson claimed that Crutchfield purposely rammed her car and then left the scene. She filed a police report, providing a copy of the Torrance restraining order. Later, however, she was told by police that the order could not be found in the “CLETS” system, rendering it invalid.

Robinson had never been notified that the order had been altered or canceled, although the document appearing to have been signed by Padilla was dated October 14, 2016 and made retroactive to April 17, 2016 by virtue of a handwritten, unsigned note on the first page.

The February 9 incident involved Crutchfield’s appearance at a commuter train station where Robinson boards and debarks a train to and from work each day.

After receiving the “document” from Catano, Robinson told The Post & Email that on October 14, 2016, a hearing was held by Padilla, who asked counsel from both sides to present arguments in the form of “Points & Authorities” as to whether or not Padilla was authorized to cancel Veasey’s restraining order.

Although Robinson was in attendance, she said that no order was issued following the hearing, at least not of which she was made aware.  She added that the new order appearing to have been signed by Padilla produced by the Hawthorne Police Department does not appear in the Edelman Children’s Court file concerning her daughter nor in Robinson’s Torrance file.

On February 16, Robinson returned to Torrance to request a Temporary Restraining Order to replace that which appeared to have been nullified by Padilla in the document provided by the HPD. The court refused, stating that a restraining order was already in place.  That decision generated Robinson’s request for a hearing, which took place on March 23.

Both Robinson and Crutchfield attended and were self-represented. At the end of the brief hearing, Veasey produced a Minute Order stating that no additional restraining order was required because the December 10, 2015 order was still in effect.

On April 3, Veasey went a step farther and issued a second Minute Order stating that “there is no information in this file to indicate that such order is not valid and in effect until 1210/20. The Court has not received any requests within this action to terminate the order or any orders terminating the order from any other court.”

Robinson provided a copy of the order to the HPD and the Los Angeles Sheriff’s Department, which had uploaded the Padilla document to its website, also asserting that it canceled Veasey’s 2015 order.

Catano claimed to Robinson that his department’s “court liaison officer” provided him with the Padilla document but left the individual unnamed. On March 30, The Post & Email sent an open records request to Catano requesting all documents generated between October 14, 2016 and March 30, 2018 containing the words “court liaison” or “court liaison officer.” To date, we have received no response from anyone at the HPD.

On April 23, in addition to issuing a new, five-your restraining order on behalf of Robinson, Veasey included Robinson’s two adult children, as Crutchfield was reportedly in the vicinity of one of them last year, causing Robinson distress.

An initial letter dated March 19, 2018 was sent by this publication to Los Angeles County Juvenile Court Presiding Judge Michael Levanas detailing the conflicting court orders and mysterious origin of the Padilla document.  A second letter dated March 29, 2018 to Levanas contained a reproduction of the electronic image of Veasey’s March 23 Minute Order as sent to us by Robinson.  In his response letter, Levanas wrote that he could not confirm or deny the existence of the cases and that he is unable to change the decision of any jurist.

Pages 1 and 5 of the new order signed on April 23, 2018 read as follows, minus redactions of personal information and case number: 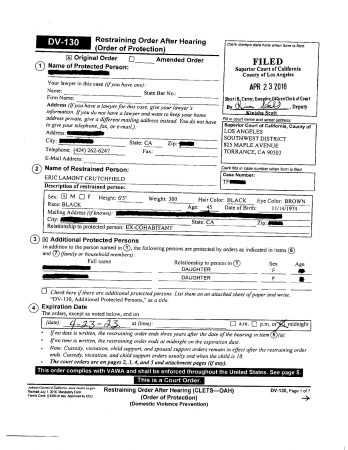 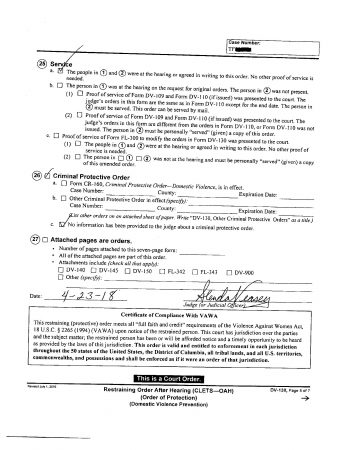