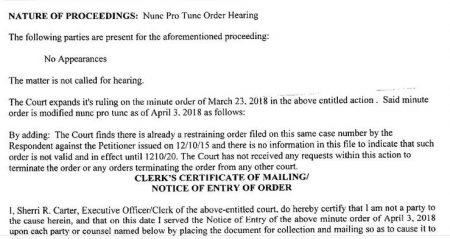 On March 23, a brief hearing took place which Robinson and the father of her three-year-old child attended, prepared to argue for and against, respectively, the issuance of a new restraining order due to the alleged cancellation of the December 10, 2015 order, an action of which Robinson was unaware and had never been notified.

The issue arose unexpectedly after Robinson attempted to report an alleged restraining order violation on February 9, 2018, to the Hawthorne Police Department (HPD) after she sighted her child’s father at the commuter train station as she exited toward her car.

Believing that Eric Crutchfield had no reason to be at the train station, Robinson was alarmed and immediately went to the HPD to report it.  While an officer ultimately took her report, several days later, Capt. Julian Catano of the Hawthorne Police Department emailed Robinson with a document that he said overrode Veasey’s order.

The document, titled “Findings and Order to Terminate Restraining Order After Hearing,” appears to have been signed by Commissioner Steff Padilla of the Edelman Children’s Court, division of the Los Angeles Superior Court, on October 14, 2016 and indicates in un-initialed handwriting that it is retroactive to April 17, 2016.

Catano claimed that he obtained the document from his “court liaison officer” but did not provide the name or contact information for the individual.  The Post & Email contacted Catano for that information and received no response, subsequently sending a formal request for it under California’s public records act.

On  March 23, Veasey stated that she was unaware of any order which transcended her own and that neither Padilla nor any other judge had jurisdiction over the restraining order.  Conversely, Robinson reported, at an October 14, 2016 hearing on the issue, Padilla appeared to conclude that she had the authority to rescind Veasey’s order.

Significantly, however, Robinson never received the order and later discovered that it is filed nowhere officially.

On February 16, 2018, Robinson went to Torrance Superior Court to request a new restraining order and view all of the documents in her file.  She reported to this writer and other parties while at the courthouse that Padilla’s alleged order was not there.

Similarly, she said she has reviewed the Edelman file, which contains her daughter’s dependency case documents, and did not find the document there.  She then requested the new restraining order from Torrance and awaited the March 23 hearing.

In a Minute Order issued after the five-minute hearing, Veasey wrote that “The Court finds there is already a restraining order filed on the same case number by the Respondent against the Petitioner issued on 12/10/15 and that order is still valid and in effect until 12/10/20. The Court has not received any requests to terminate the order.”

Later that day, Robinson provided the Minute Order to the Hawthorne Police Department and the Los Angeles Sheriff’s Department, which had uploaded the Padilla document to its webpage, to show that the December 2015 order remained valid.  At that point, the LASD said it could take no action to resolve the contradiction in orders until it heard directly from the Torrance Superior Court.

Consequently, Robinson returned to Torrance and again asked for a new restraining order, resulting in the April 3, 2018 Minute Order (below) which “expands” the March 23, 2018 order with amended wording:

The Court finds there is already a restraining order filed on the same case number by the Respondent against the Petitioner issued on 12/10/15 and there is no information in this file to indicate that such order is not valid and in effect in till 1210/20. [sic] the Court has not received any requests within this action to terminate the order or any orders terminating the order from any other court.

According to The Free Dictionary, “Nunc Pro Tunc” means “that action has retroactive legal effect, as though it had been performed at a particular, earlier date.”

The Merriam-Webster Law Dictionary defines the term as “now for then —used in reference to a judicial or procedural act that corrects an omission in the record, has effect as of an earlier date, or takes place after a deadline has expired.” 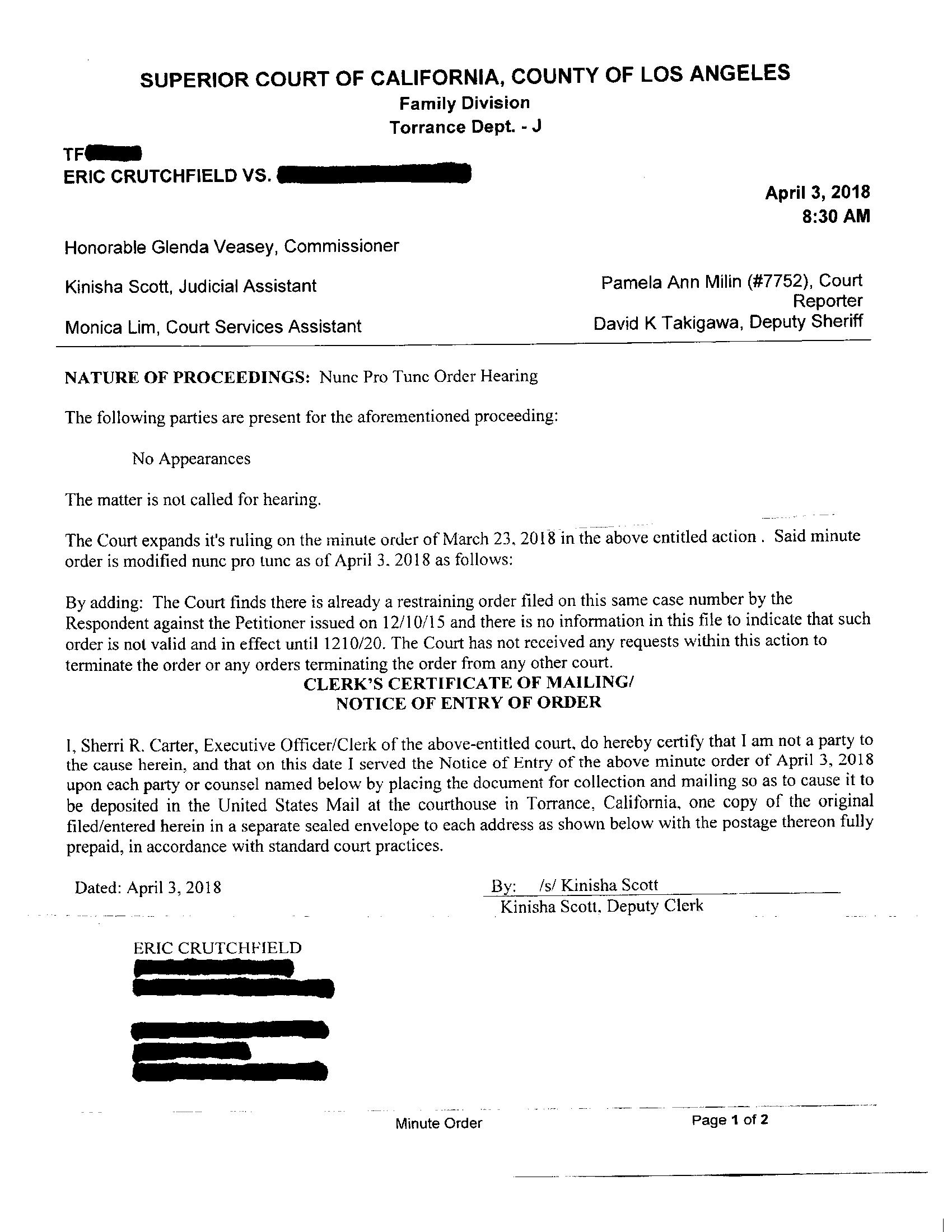 On Friday, Robinson sent the following email, with the above document attached, to the LASD and Hawthorne Police Department:

Hawthorne Police Department made me feel victimized when I felt Lt. Royer meant to discredit and humiliate me. Torrance Court has vindicated me despite great attempts to marginalize a repeated victim of domestic violence. Crutchfield viciously assaulted me, abused me, and currently stalks and terrorizes me. I have been saddened by systemic efforts to support his criminal behavior.

I received this correspondence by mail today. I hope this is the first step toward vindicating me and protecting myself and children.