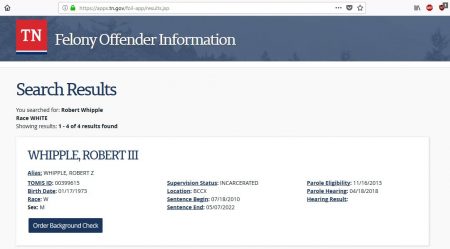 (Apr. 19, 2018) — As was discussed on Thursday morning’s edition of the “Nooganomics” radio show hosted by David Tulis, TDOC inmate Robert Z. Whipple, III had a parole hearing on Wednesday which, according to his TDOC online record, was long overdue.

Last year, a parole-eligibility date was stated as January 29, 2014, with two backdated entries then made, respectively, to December 2013 and November 2013.

Whipple has sued the TDOC over allegations of civil-rights deprivation, more recently focusing on the curtailing of the hours the new “Westlaw” legal tool, installed in the annex at the Bledsoe County Correctional Complex (BCCX) last month, such that Whipple said he now has no access.

In a detailed timeline submitted on April 2 in Whipple v. Millay, Whipple reported that TDOC Commissioner Tony Parker signed a “settlement agreement” making the Westlaw tool available to annex residents, where Whipple is housed.  Whipple had filed a number of grievances reporting that for an undisclosed reason, annex inmates are not permitted to use the federal law library located at the prison’s “Site 2.”

On April 3, Magistrate Judge Alistair E. Newbern ordered the TDOC to participate in a telephone conference to include Whipple in an apparent attempt to resolve the issue of law library access.

In Bounds v. Smith, the U.S. Supreme Court has ruled that state prisoners are entitled to have access to the courts through prison law libraries or trained legal aides.

On Thursday morning, Tulis raised the question as to what might happen to Whipple’s two active federal lawsuits should he be granted parole, to which this writer responded that it could appear expedient to the TDOC to grant Whipple parole in order to render his legal actions moot.

If that were to occur, Tulis observed, the lawsuit seeking to rectify the denial of legal access would not have an opportunity to effect positive change for other inmates.

As The Post & Email has reported, a number of Tennessee inmates and their relatives have claimed that parole should have been granted at various times but were not for reasons claimed as “retaliation.”

At one time, Whipple had four active federal lawsuits against the TDOC, with that number now reduced to two.  While Whipple v. Millay deals with access to the courts, the other, Whipple v. Tennessee Board of Parole, claims that the plaintiff was “denied parole in retaliation for previous lawsuits.”

Whipple has said he is a non-violent offender who has completed the Therapeutic Community (TCom) class, a reported requirement for him to be granted parole.

On Thursday evening, The Post & Email was informed by a close relative of Whipple’s that the hearing took place but that no disposition was immediately announced.  The relative added that the Board could take up to 30 days to render its decision.

This article has been cross-posted at AF.