(Apr. 5, 2018) — An inmate whose name was mentioned on the “Nooganomics” radio show approximately three weeks ago reported in a recent letter that the Omeprazole he has been taking for years for acid reflux disease was reordered after a two-month hiatus.

Trousdale Turner Correctional Center (TTCC) inmate Danny Shockley, #247280, wrote in a March 29, 2018 letter that the medication was “renewed” without his having to make a visit to the health clinic.

To this writer’s knowledge, Shockley has not yet received treatment for his Hepatitis C, which he has described as being in an advanced stage, causing enlargement of the liver and causing frequent pain.

Over the past two years, a number of inmates at Tennessee’s newest prison and their relatives have reported lapses in their medication regimens for days, weeks or months.

Last June, Nashville’s WSMV focused on alleged lack of or inadequate medical care at the facility, which is owned and operated by the private prison company CoreCivic.

CoreCivic has provided no response to this writer’s questions regarding medical care, reported gang activity, short-staffing, and general conditions within the prison, some of which were substantiated in a November 2017 audit by the Tennessee State Comptroller’s office.

Shockley also reported that his parole hearing is scheduled for April 23, 2018 at 8:30 AM local time. “I’m hoping for the Best this time around,” he wrote. “The Hearing officer Recommended me for my R.e.d Date the Last Time, But Nashville came back and put me off for 13teen month’s so here I go again!! I’m past my R.E.d Release elagebility date By 4 month’s this time around.”

Shockley is not the first Tennessee inmate to report that his parole eligibility date has come and gone without a hearing. BCCX inmate Robert Z. Whipple III was eligible for parole in November 2013, according to his updated record in the state inmate list, and is awaiting a hearing on the 18th of this month. 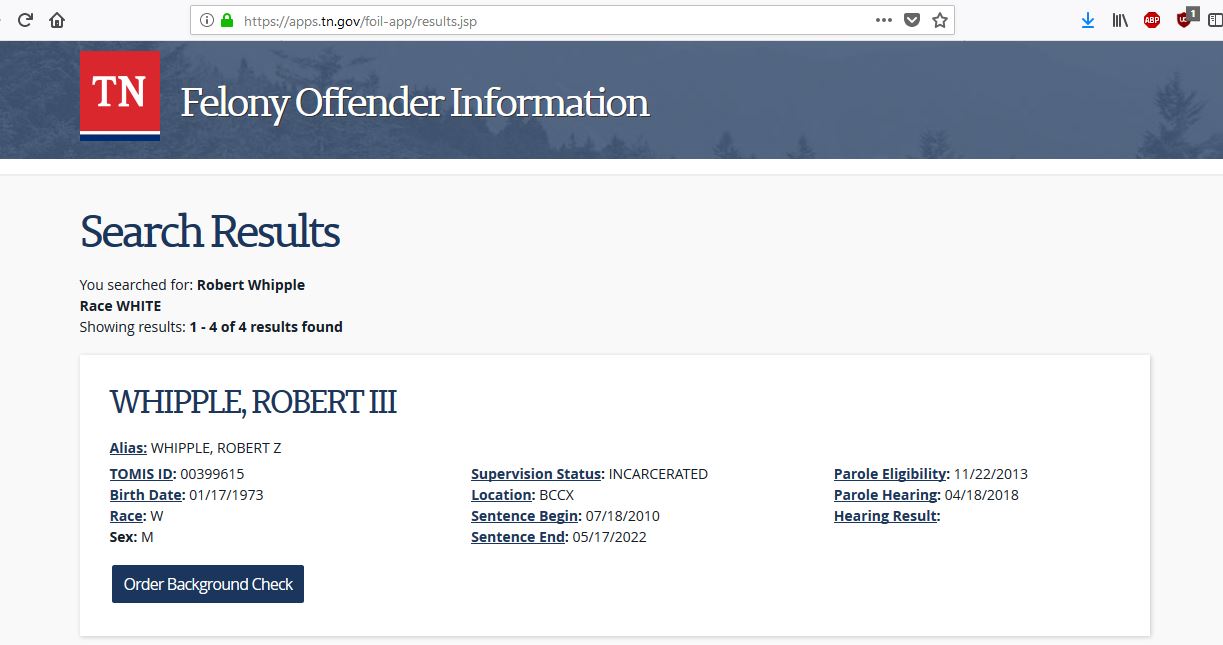 Last year, Whipple sued the Parole Board in federal court and requested that the members named in the suit not adjudicate his eventual hearing.

Earlier this year, after waiting several months for physician-prescribed diabetic shoes to arrive, Whipple was considering filing another lawsuit against the TDOC and its medical provider, Corizon.  Ultimately, his offer to have his family pay for the shoes expedited their delivery, affording him much-needed relief from the pain of diabetic neuropathy, Whipple said.