“IT WAS MY GREAT HONOR TO FIRE JAMES COMEY” 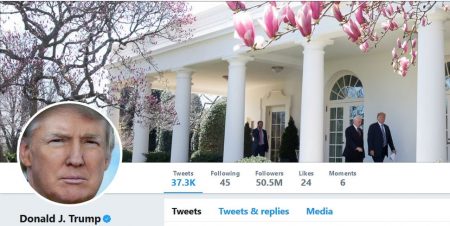 (Apr. 13, 2018) — In response to Tuesday’s anticipated release of former FBI Director James B. Comey’s book, “A Higher Loyalty:  Truth, Lies and Leadership,” President Donald Trump tweeted on Friday morning that he has no regrets about firing Comey last spring.

He also berated Comey’s handling of the investigation into Hillary Clinton’s use of a private email server over which Comey admitted she sent classified information that was almost certainly intercepted by foreign governments.

On July 5, 2016, Comey gave a solo press conference in which he attempted to make the case that Clinton’s transgressions did not rise to the level of criminal prosecution, a claim with which Trump vehemently disagreed in his tweets on Friday morning.

“James Comey is a proven LEAKER & LIAR. Virtually everyone in Washington thought he should be fired for the terrible job he did-until he was, in fact, fired. He leaked CLASSIFIED information, for which he should be prosecuted. He lied to Congress under OATH. He is weak and…..” Trump tweeted between 8:30 and 8:45 a.m.

His train of thought concluded with:

In his book, which is already a bestseller, Comey reportedly describes Trump as “a mob boss.”

Trump fired Comey last May 9 while he was giving an address in Los Angeles.  Many, including members of Congress on both sides of the political aisle who had previously said that Comey should be fired, sympathized with him given the way in which he discovered his termination.

Comey had said in the days immediately following that the nation’s chief executive has the prerogative to fire an FBI director if he so chooses.  However, with increasingly sharp rhetoric, Comey has since tweeted his dislike for the president and contended that the American people will be the judge of who has been telling the truth between the two men once his book is released.

A month after he was fired, Comey testified to the Senate Intelligence Committee that he purposely provided at least one memo he allegedly wrote following a meeting with Trump to a friend, Daniel Richman.  Richman then reportedly contacted The New York Times, which published its alleged contents without viewing it.

Comey admitted that he gave Richman the memo to prompt the appointment of a “special counsel” to investigate claims of Russian “collusion” among members of the Trump campaign and Russian interference in the 2016 election.

Comey and his former deputy at the FBI, Andrew McCabe, have provided conflicting statements as to whether or not a leak to The Wall Street Journal about the Clinton server investigation was authorized, with Comey claiming he “never” authorized media leaks and McCabe claiming that his authorization for an FBI employee, possibly staff attorney Lisa Page, to speak with a WSJ reporter about the Clinton probe was done with the knowledge of “the director.”

On March 16, McCabe was fired after having been on “terminal leave” from the FBI for approximately six weeks. Had he not been officially severed, he would have received a pension beginning on his birthday two days later. However, if McCabe is not charged with a crime, he is likely to receive the pension at a later date.

While director of the “premier law enforcement agency,” Comey ignored millions of pages of documentation provided by former CIA and NSA contractor Dennis Montgomery which reportedly revealed that millions of Americans were spied upon by various government agencies without a warrant and for no valid reason, included among those allegedly targeted for data collection are Donald J. Trump, members of his family, some of his employees, former Justice Department prosecutor Larry Klayman, dozens of federal judges, Associate Supreme Court Justice Ruth Bader Ginsburg, U.S. Supreme Court Chief Justice John G. Roberts, and Mike Zullo, a former detective who conducted a 5+-year investigation into the image posted on the White House website said to represent the “long-form” birth certificate of Barack Hussein Obama.

Zullo’s findings, made public in three press conferences between March 1, 2012 and December 15, 2016, revealed that the image is a “computer-generated forgery,” a conclusion concurred with by two reputable forensic examiners.

Early in Obama’s tenure, the FBI, and specifically the New Haven, CT branch, spurned the idea that Obama might not be eligible for the office he occupied rather than investigating why a number of mainstream media reports and Obama’s own biography had reported that he was born in Kenya and not in Hawaii, as he claims.  “You do realize that since he was born in Hawaii that makes him a U.S. citizen no matter what nationality his father was at the time. He was born in 1961, 2 yrs after Hawaii was made the 50th state in the country. There is nothing illegal about his presidency, he has not utilized 30 different social security numbers either,” an FBI agent wrote to a Connecticut resident in November 2009.

At the time, Robert S. Mueller III was FBI director.  Mueller, a longtime acquaintance of Comey, is now the “special counsel” overseeing the Russia investigations.

Ironically, it was Trump who brought the questions about Obama’s eligibility to the fore early in 2011 when Trump was considering challenging Obama for the presidency the following year. Trump continued to occasionally speak out on the issue despite media derision, although after launching his presidential campaign in June 2015, he decided to go silent on it.

On September 15, 2016, with much fanfare from the media afterward, Trump stated that “President Obama was born in the United States.”

Zullo and former Maricopa County Sheriff Joseph M. Arpaio, who commissioned Zullo’s investigation work, have both repeatedly said that the focus of the probe was not on Obama’s birthplace, but rather, on the document which Arpaio has repeatedly said is “a phony.”

To the public’s knowledge, the FBI has never investigated why a forgery would have been presented to the American people and the world when Obama’s “original” birth certificate is reportedly available in paper form at the Hawaii Department of Health (HDOH).

Several months ago, The New York Times, with other outlets following suit, reported that Trump remains interested in “the authenticity of President Barack Obama’s birth certificate.”

Editor’s Note: This article initially stated that Comey was FBI director in 2009; however, Robert S. Mueller was director at that time.