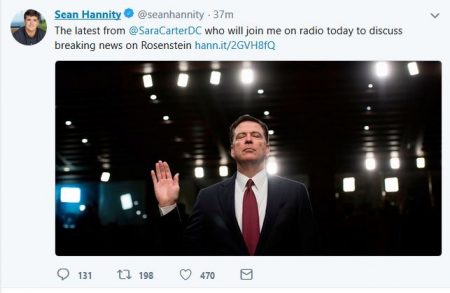 Carter is a frequent guest on both Hannity’s daily radio show and 9 PM ET Fox News program, “Hannity.” Carter has investigated and reported, in some cases exclusively, on the 2010 Uranium One agreement in which 20% of the U.S. uranium supply was sold indirectly to Russia despite warnings from an FBI informant that bribery, graft and other forms of corruption were in play as the transaction moved forward.

Carter has also reported on the much-anticipated DOJ Inspector General’s report to be compiled from more than 15 months of research into whether or not political bias affected the actions of officials within the Justice Department and its subsidiary, the FBI.

It was reported on Thursday that Rosenstein met with President Trump at the White House for an hour to discuss “routine Department business.” Rosenstein was reported by The New York Times to have granted permission for an FBI raid to take place Monday on the home, hotel room and offices of Michael Cohen, Trump’s longtime personal attorney.

A number of legal minds remarked that the raid was unnecessary and a possible violation of the attorney-client privilege normally observed between a lawyer and his client, although many disagreed. On Friday morning, attorneys for both Cohen and Trump presented their argument to a federal judge to issue a Temporary Restraining Order on the use by the FBI and DOJ of the materials seized from Cohen’s offices.

Rosenstein hired Robert S. Mueller III to serve as “Special Counsel” in an investigation focusing on whether or not Trump or any of his campaign associates “colluded” with Russian government operatives to gain an advantage in the 2016 election. A second investigation was to determine the extent to which, if any, Russians interfered in or attempted to influence the outcome of the 2016 election.

In mid-February, Rosenstein announced at a press conference the grand jury indictments of 13 Russian citizens and three Russian-formed companies which organized pro- and anti-Trump activities and established fake Twitter accounts. Following Rosenstein’s announcement, a number of commentators opined that the Russians will likely never actually be prosecuted since their extradition to the U.S. would prove virtually impossible.

While some perceive Rosenstein as undermining the Trump administration and have called for his resignation or termination, others support his recruitment of Mueller and wish to see the Special Counsel finish his investigations unimpeded.

Breaking update, 1:34 p.m.:  NBC News producer Jesse Rodriguez tweeted moments ago that Rosenstein announced that he is “prepared to be fired” but that he “stands by his actions.” 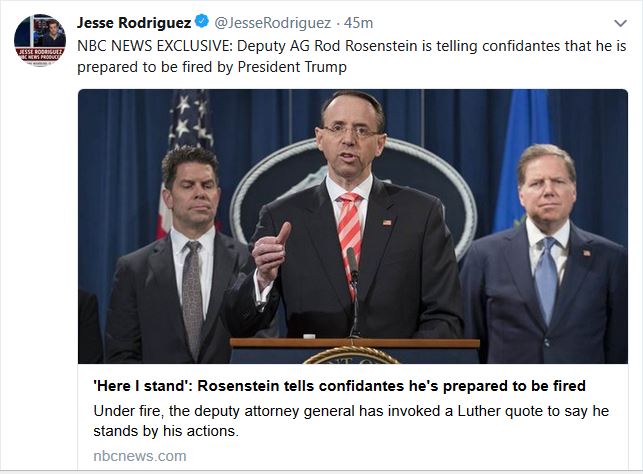 The NBC report does not mention Rosenstein’s approval of the Cohen raid as a factor in Rosenstein’s possible termination, but rather, focuses on his official dismissal of former FBI Director James Comey last May for which Trump took credit on Friday morning.

Rosenstein has worked in both Republican and Democrat administrations.