THEN TAKEN AWAY BY STEALTH

(Apr. 10, 2018) — After reporting approximately five weeks ago that the “Westlaw” legal resource had been installed at the Bledsoe County Correctional Complex (BCCX) in Pikeville for use by the prison population, inmate Robert Z. Whipple III, #399615, reported in an April 3, 2018 letter that he is now completely unable to utilize it.

In 2014, Whipple filed a civil-rights lawsuit against the TDOC and Tennessee Attorney General’s office for allegedly denying him access to the courts by means of a legal law library or its equivalent.

At the time, Whipple was housed at the Turney Center Industrial Complex (TCIX).  He believes he was relocated to BCCX in 2015 as a result of his having filed Whipple v. Millay and exercising his First Amendment rights.

He is now housed in the “Annex” at BCCX.

While BCCX has a federal law library located at its “Site 2” building, Whipple said he was prevented from obtaining a pass to use it since last fall.  He said his alternative requests for legal materials, while reportedly submitted in accordance with TDOC policies, were thwarted by prison staff.  Having exhausted what he believed to be all other options, Whipple wrote to the TDC that he would file a new lawsuit over his lack of access to legal information, citing the U.S. Supreme Court decision in Bounds v. Smith.

In an alleged “negotiation” with Whipple with the apparent purpose of avoiding renewed legal action in Millay, in late February BCCX installed the Westlaw resource on a computer terminal in a section of the prison to which Whipple is permitted access.  Although having related some initial confusion and/or lack of cooperation on the part of correction officers as to the operating hours, Whipple indicated that the compromise appeared to have the potential to solve the problem.

However, an April 3 letter received on Tuesday indicated a quick reversal of that disposition, as Whipple wrote that the hours the library is now open have been reduced by more than half and, given his employment schedule, he is prevented from visiting it at any time.

Whipple also enclosed a copy of a grievance he filed in response to the curtailing of the Westlaw terminal’s hours of operation: 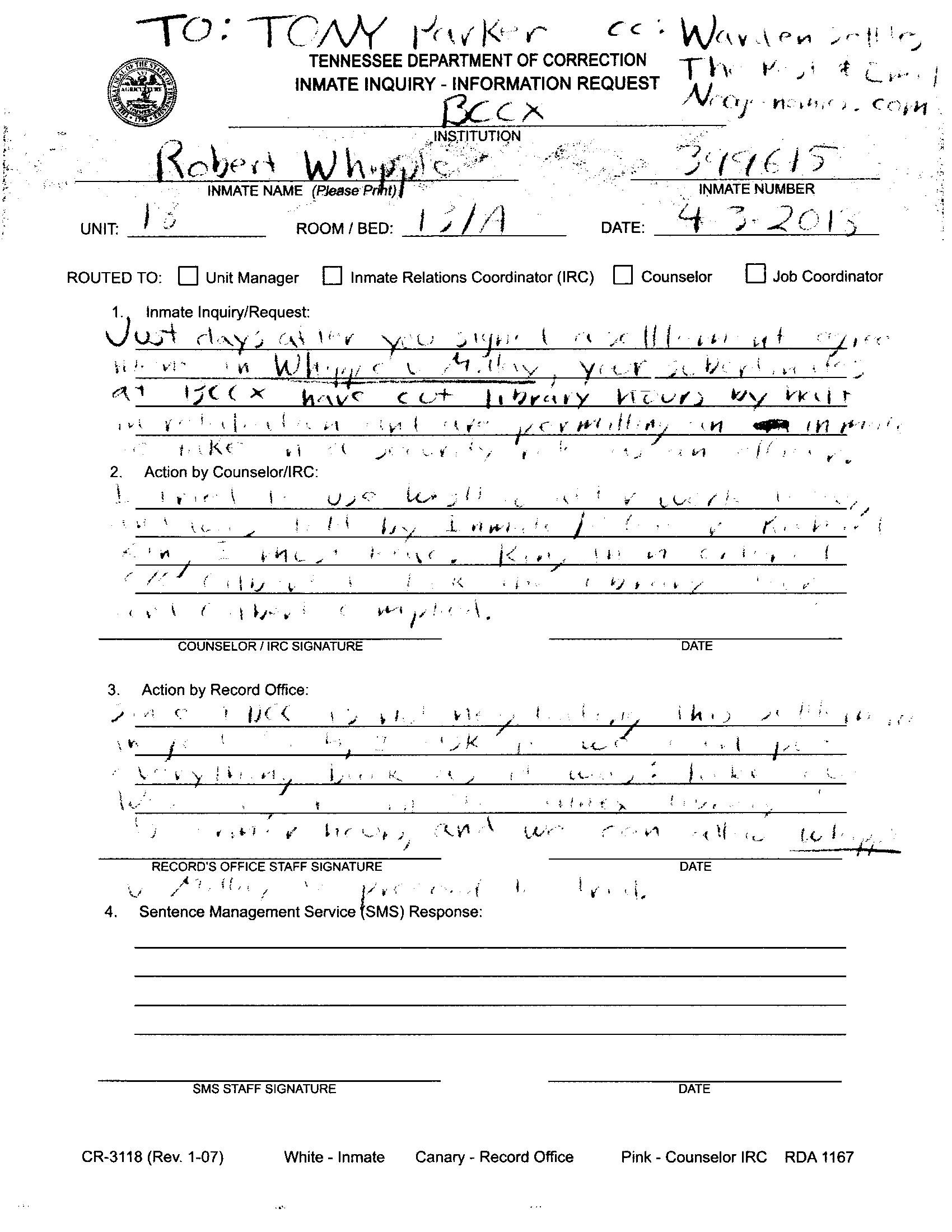 Just days after you signed a settlement agreement in Whipple v. Millay, your subordinates at BCCX have cut library hours by half in retaliation and are permitting an inmate to take on a security role as an officer.

I tried to use Westlaw after work today, and was told by Inmate/Officer Richard King I must leave.  King then ordered C.O Gilbert to lock the library door, and Gilbert complied.

Since TDOC is not negotiating this settlement in good faith, I ask if we can put everything back as it was:  take out Westlaw, return the annex library to is former hours, and we can allow Whipple v. Millay to proceed to trial.

As reported previously, Whipple is scheduled for a parole hearing on April 18, nearly four and one-half years after his inmate record indicates he was eligible.